Thanks to everyone who contributed a question, or helped refine one in the call-out debate.

Who are your starting number 6 and number 8 for the first game against New Zealand, given this series? All the candidates did great shifts, but there may have been some missing ruck presence in Games 1 and 2.
– Numpy.

Would love it if you could compare the engagement of [Lachie] Swinton and [Rob] Valetini in Test 3 and 2, in terms of the breakdown. I thought they were both very strong in different ways, but wanted to see if there was a noticeable difference in this area.
– Oblonsky’s other pun

I would extend the question to which Wallaby attackers did the most in terms of cleanup, quantity and quality. It seems to me that in this area AAA and Philip have dropped from what they did before, and have not picked up as LSL has improved or fallen.
– PeterK

There are some valid comparisons to be made in the contributions of Lachie Swinton and Rob Valetini during the final test, with Valetini coming off the pine for the last 26 minutes and Swinton playing the first 54 minutes.

First of all, let’s point out that France had significantly weakened their presence in the defensive collapse. They chose an outside center, Pierre-Louis Barassi, for Jonathan Danty, and Danty had dominated the ruck exchanges in the first two tests. His absence made Australia’s contact task a lot easier.

At the same time, the roster of Isi Naisarani at number 8 and Lachie Swinton at number 6, who made short arcs through scrum half Tate McDermott, made Australia look a lot more comfortable in possession than at any other time in the series.

Here is a basic comparison of the activity from the blindside flanker position.

The pace of work was above average for both Swinton and Valetini. You would expect the finisher to put more impact in his shorter time on the field.

Swinton lashes out Valetini, while cleaning and carrying. Both he and Naisarani worked well on McDermott’s cues around the ruck.

This in turn allowed Australia to ‘juice’ the benefits of being in contact situations on their own terms.

Swinton drives and Allan Alaalatoa stays on his block long enough to create a path for Michael Hooper’s pick-and-go. The man they are muscling is the mountainous Romain Taofinfenua.

This last item is something of a specialty on the Dave Rennie menu. He wants support players to stay on their block, or take out defenders who are often only loosely connected to the ruck itself.

It’s on the very edge of legality, but I suspect Wallaby’s head coach likes what he sees in this area from both Swinton and second rower Darcy Swain.

The problem for Valetini is that he has not been able to reproduce the same carry impact that he had in Super Rugby. He has been good at making contact in a low, dynamic position.

He has been much less effective when trying to tackle an opponent’s high:

Valetini engages French runner-up Taofifenua in an upper-body struggle, and there will only be one winner of that match.

The [Cameron] Woki tries to reach over the ruck – was it legit? It’s not clear if he’s making contact with the ruck, but doesn’t that lead his own players still in the ruck to unintentionally offside?
– Simon Colman

Interestingly, the French prop is in the middle of the Wallabies defense line; so for the ball. He looks back at Cameron Woki, the #7, who is about to hit the ball. They seem to meet. The French #1 moves away from his position to his right behind the Wallaby line and as he does this, the #7 launches over the ruck into the space left by the #1 to score. Both the linesmen and the referee are watching. It seemed like a regular play to me; but it also looked illegal but maybe i’m wrong.
– Nakanaka

I don’t see anything wrong with trying. If you look at the actions of French loose-head prop Enzo Forletta, he is a long way from the scene of the action before Cameron Woki ever picks up the ball. 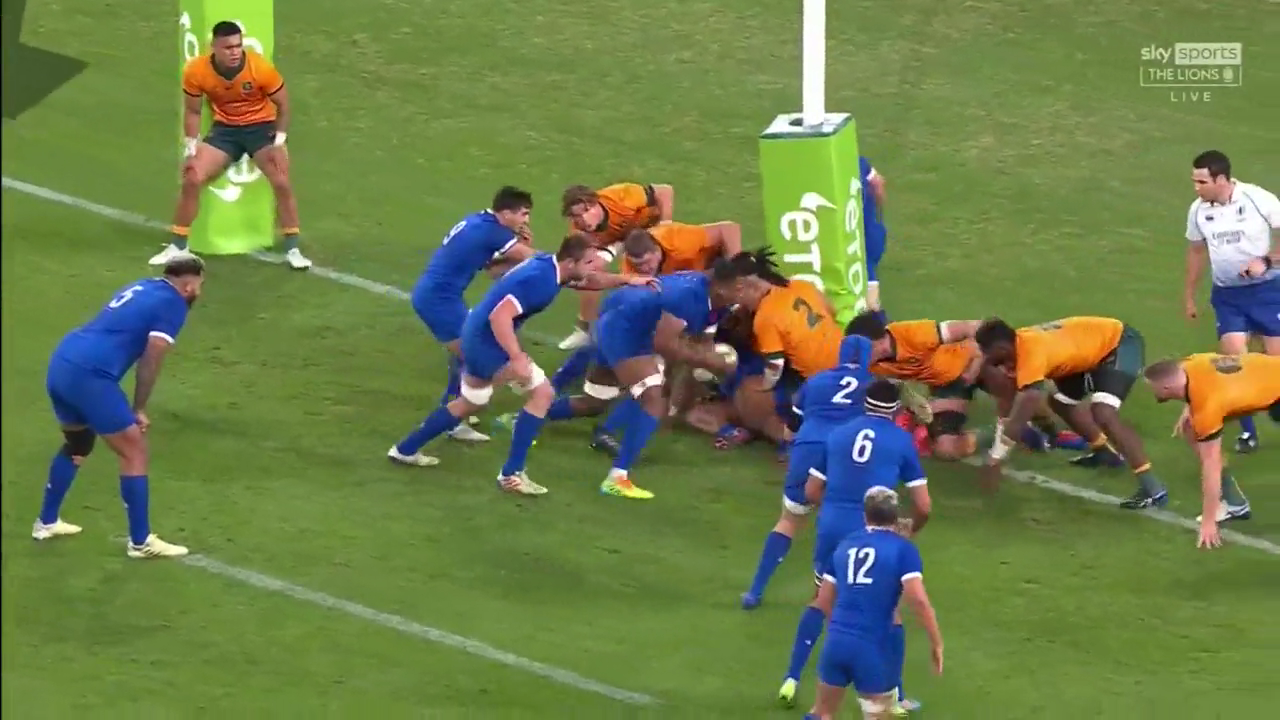 However, the Wallaby attackers on the goal line can be offside, with their hands well in front of the whitewash the moment Woki picks up.

Nothing wrong with that, offensively.

Can you please explain why the Wallabies continue with the “box kick”? I’ve rarely seen it ever give them an advantage. It is so difficult at the Test level for the attackers to win and maintain possession that it is then kicked out. I’d like to understand why you think they keep doing this.
– Bobcat

The idea behind the box kick is to give the kicking side a chance to regain possession at the time of receiving. If they can cause an opponent’s foul, or collect the ball themselves, there is an opportunity to attack an unstructured defense on the next play.

This example comes from the recent match between South Africa ‘A’ and the touring British & Irish Lions.

Lions scrum half Conor Murray chases his own kick to win the ball back, and the tourists immediately spin him wide. They’re better organized in the outer channels, with three outer ridges and a number 8 instead of a second row, and one in the middle that both covered the whole way from the opposite side of the court!

You don’t even have to neatly win the ball back from the box kick.

Tom Banks messes up, and France can match their fullback with two Australian forwards in the next game.

Hi Nick, many of my generation watch rugby and cannot follow the defensive patterns that always leave a winger unmarked. In the old days of drift defense outside your 22 and man-to-man within 22, the winger stayed on his winger so there were no kick-pass attempts etc but maybe a lot more scored a channel or two closer. Can you inform enthusiastic old(er) timers about what they are doing in different parts of the field?
– Banjo Kelly

The game has radically changed Banjo – even since the dawn of professionalism in 1995! In terms of defensive stances, they have become a lot tougher and more aggressive.

Defense in the outer channels by the last two defenders (usually backs) reflects the change in stance. As a wide defender you can do two things: follow the attacker in front of you or follow the passer-by. With the speed of the modern game, you can’t do both effectively.

If you follow the attacker, sooner or later you will end up in a drive to touch. Following the passerby prepares you for a big tackle or interception.

The best defensive coaches don’t like the idea of ​​drifting, play-in and play-out. There is no pressure on the ball and the opposing team can keep it calm for a long time. They prefer to condense the defense and actively look to create passing errors, fumbles and interceptions.

Australia’s approach to get the ball past Damian Penaud on the French right wing has been interesting from start to finish in the recent series. Let’s look at the positives and negatives of the modern way.

Penaud doesn’t care about the two attackers behind him (Rob Valetini and Marika Koroibete). The moment Tom Banks wants to deliver, he stands squarely in front of the passer-by and tries to attack the space between the distributor and the receiver.

Now compare that to one of Australia’s successes in the next test.

Penaud’s stance is exactly the same, but this time the pass beats the man and space is created on the left for Hunter Paisami. About 25 years ago, this move would probably have turned into a try – but that is not the case in 2021.

French center Arthur Vincent comes back into cover to take down Paisami on the 22, and France is back in shape soon after. In fact, the series ended two stages later with a French turnover gain at the breakdown.

The best defensive coaches, like Shaun Edwards, like to trade that linebreak for the pressure they can put on the ball any day of the week.

Be sure to check back in two weeks for the next Coach’s Corner!