The racehorses in Zed Run can’t nibble on an apple or leave a steaming mound of manure for a steady hand to sweep up.

If someone gives you one as a gift, forget to look it in the mouth, but be very thankful – they can be grown, played with and earn you a motza online.

Digital NFTs, or non-fungible tokens, were huge earlier this year when auction house Christie’s sold the digital artwork Everydays: The First 5000 Days, by crypto artist Beeple, for a staggering $69 million.

It’s the same technology — a technology that allows creators and collectors to verify the authenticity of property by encrypting a genuine signature on blockchain — that Australian company Virtually Human Studios has used to power their groundbreaking horse racing game called Zed Run.

Chris Laurent, co-founder of Zed Run, told Bitcoin and Ethereum news site Decrypt that the idea for the game came about when he picked up a takeout order at his local Chinese restaurant in 2017.

He saw an advertisement on the wall for a horse stud that offered a stallion for breeding for a $15,000 fee. Laurent, involved in the horse racing industry by working with a bookmaker, was aware of a trading game called CryptoKitties based on the Ethereum blockchain, and he ran with the idea of ​​creating the breeding system for Zed Run.

Laurent said he and co-founder Rob Salha initially couldn’t believe they had found buyers for their NFT horses, especially before launching racing and breeding aspects of the game.

But within weeks, horses first purchased for $30 were selling in the secondary markets for as much as $10,000.

“When it comes to blockchain adoption, the best way to bring in new users is to give them something they are familiar with,” Laurent told Decrypt.

“The reason Zed does well is because you don’t have to explain it: you buy a horse, pay to enter a race, and take home some of the pot if you’re successful — that’s it literally.”

Zed Run races take place on a floating track that runs through a futuristic landscape – fans of cult film Tron will feel right at home – and are governed by algorithms that assess the abilities of the competing horses, which their owners paid to participate in .

Owners pay a small entrance fee — usually between $2 and $15 — to have their horses race against others for prize money.

At the heart of Zed Run is the NFT, a unique crypto asset that can be linked to digital content, in this case a digital horse. Owners buy and sell horses and enter races with prizes at stake.

Unlike most NFTs—usually works of art or videos that are kept as collectibles or sold for a profit—each digital horse is what the creators of Zed Run call a “breathing NFT.”
“A breathing NFT is one that has its own unique DNA,” Roman Tirone, head of partnerships at Virtually Human Studio, told The New York Times.

“He can breed, has a bloodline, is going to lead a life of his own. It races, it has genes that it passes on and it lives on an algorithm, so no two horses are the same.” 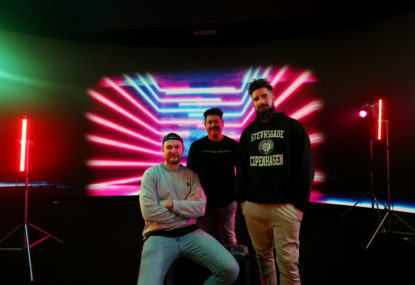 The game and the prizes on offer have now been given a significant boost by partnering with Pony Run, a gaming developer backed by PlayChip’s advanced PLA ERC20 token.

Pony Run will expand the gaming experience within Zed Run by sponsoring annual special racing events, each with a promised token prize pool featuring PlayChip – a universal gaming token. PlayChip is a key player in the incentivized, blockchain-enabled, sports community and gaming ecosystem, and has a vision to unify the $3 trillion global gaming market.

The Pony Run sponsored events will inject an estimated $30 million into the Zed Run community over a three-year period by investing a minimum of 2.5 billion PlayChip tokens in prize pools.

Allocation of the PLA tokens will send unprecedented value directly to stable owners in Zed Run, giving them the chance to win PlayChips in addition to the current Ethereum prize pools.

It is also a big moment for the PlayChip community and its holders, who have been waiting for a special project to launch PLA in the community. PLA is available through Bittrex or HitBTC.

The successful bidder will receive an Asteroids-themed Atari artwork, Asteroids itself, and a unique Atari First Edition skin!???????? #AtarixZEDRUN

We can’t wait to see Asteroids on the track! pic.twitter.com/8GmZgKD1Wi

“The PlayChip was built with the vision to be a universal gaming token and it’s exciting to know it’s being adopted by innovation leaders, Pony Run and Zed Run,” said PlayChip spokesperson Jane Morgan.

“NFT digital horse racing, ownership and breeding is such a great concept that will drive years of new business, product innovation and spin-offs.”

It’s no wonder that the Zed Run ecosystem has received immediate attention and is growing rapidly inside and outside the crypto space.

“The fact that PlayChip has been selected and built into the next stage of development to facilitate and drive community growth is powerful news for PlayChip holders.”

“I’ve followed the team behind Zed Run from the start,” Buckingham said.
“It’s great to see how much traction they’ve gotten. The sports and entertainment area moves at high speed. The NFT space is certainly an area that I am keeping a close eye on and it is clear that the impact that Zed Run has created is significant.”

The innovation of ownership is what sets Zed Run apart from standard online horse racing – and some owners, just like in real life, are big players.

One is Alex Taub, a Miami entrepreneur who owns about 50, including one for his daughter who likes to race it after school.

“Most NFTs you buy and sell, and that’s how you make money,” Taub told The New York Times. “With Zed, you can monetize your NFT by racing or breeding.”

“I wouldn’t be surprised if some of these horses trade for $1 million within a few months,” Yair Altmark, a New York venture capitalist who has spent more than $300,000 on digital horses, told The Times.

Geoff Wellman, one of the game’s co-founders, says its power lies in the connection between humans and animals.

“It’s about bridging the real with the virtual and developing an NFT that you can connect with emotionally,” Wellman said.

“We have stable owners who have traded in their racehorse and tell us they are still monitoring how the racehorse is doing because of the connection they have with it.”