An short circuit on the 15th floor, then the decisive passage, “The Chimney Effect”, made in the gap between the windows and the metal structure that supported the ‘sail’. This is the hypothesis that takes shape after the first technical investigations of the firefighters, supported by the Roman colleagues of Fire investigation unit, on the day after the fire that Torre del Moro from via Antonini, a Milan. The possibility that it was a short circuit that caused the flames is under consideration detectives and investigators, led by the Deputy Prosecutor Tiziana Siciliano, which will open a file with the hypotheses of guilty disaster O negligent fire. On the other hand, the dynamics of the maxi-stake development are taken for granted: after the triggering on the 15th floor, in an apartment that was empty at the time, it quickly spread to the whole building due to the ‘chimney effect’. ‘ generated by the space between the structure in reinforced concrete and the metal lid. AN’cavity of several centimeters in which the air inside accelerated the spread of the flames, which quickly devoured the external structure and the building.

Building fire in Milan, extinguishing work at night. The images from above: several firefighters at work

Structural checks of the building – In these hours they are in progress structural controls on the building, where minor outbreaks are still under control. The judicial police team, together with the magistrate, check the apartments one by one, while the fire brigade is verifying the static of the artifact, to understand whether it is necessary break it off some parts. “There are still outbreaks from floors 12 to 19,” said a firefighter. “You have to remove the ashes and expand, but it takes patience, how many hours it will take I do not know, the work is long because the embers have to be broken and with the wind it starts to burn again”. When asked about the operation of the fire suppression system, he explained that “from the tenth floor upwards it worked”. As for stability, the brigade explained that the floors are damaged, but the structure of the sail and anchors do not appear to be, and the stairwell is also stable.

The Sicilian Prosecutor: “Potential Critiques of the Fire Fighting System” – “Access was carried out up to the twelfth floor, at the moment manually. It has been confirmed that there are no victims, which is the most important, if not a small dog,” said the Sicilian prosecutor. “For now there doesn’t seem to be any major stability issues, at least to get in and inspect it. Inside, you can only enter with extraordinary care, because the great heat developed destroyed the insoles. The structure as a whole holds up, but the insoles are unsafe. It’s very dangerous. Drones – he explained – allow us to have very good images even in the apartments. I feel that in a weather all reasonable you can start to have some answersBut “any hypothesis would be really insane at this point,” he specifies, “it really is.” too early. that of short circuit is one of the hypotheses”. To the journalists who asked her whether the… Fire extinguishing system worked, Siciliano replied: “At the moment there may be some coming up critical issues, which, however, have yet to be evaluated”. 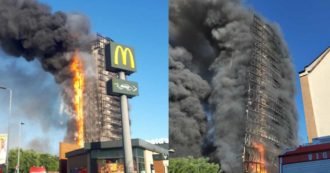 Milan, fire in a 15-storey building in the southern suburbs Mayor Sala: “We have no news about victims for now”

The analysis of the coatings – In the next steps of the investigation, the deputy prosecutor and the deputy Pasquale Addesso will provide all documentation related to: construction method: of the skyscraper and ai materials used. It will have to be ascertained whether the material used to make the building’s cladding panels is some sort of “thermal jacket“, was indicated as fireproof or not. The public prosecutor continues to repeat that “it could have been much worse”, also because there were no casualties or injuries despite the enormous fire. Video taken by a local resident shows the fire igniting on the fifteenth floor and smoke starting to rise from the balcony of an apartment, but investigation will have to determine where it actually started and what causes it. . “We have seen that the aluminum panels that covered the palace caught fire, but you need to examine the material, and those are all things that need to be done in laboratory‘ explained Siciliano again. “Then it will be necessary to check the legislation of the time, because this building has ten years: they seem very few, but in ten years a lot of regulations have changed and there are too new acquaintances about the materials”, he clarified, “so there are so many things to evaluate that will take time and great accuracy”.

Rome, journalist attacked by a protester at the sit-in against the green pass in schools: “Struck in the face with 4-5 punches”

Legislation prior to 2013 – And in fact, as emphasized by the Fire Department’s Central Fire Department Director, Stefano Marsella, the building was designed and built with the fire protection requirements envisioned at the time of construction, so before 2013, when updates were made on the fire regulations regarding the facades. Marsella announced a new decree for the fire safety of the facades and the external superstructure of buildings, including roofs. “In Italy – he explains – there is a fire prevention regulation that specifies how buildings should be designed and a specification for what is called technical”curtain walls“, That is, the coatings of a building, the coatings. In 2013 the guidelines for these coatings, implemented with the decree of January 2019 on fire prevention regulations for civil buildings and now we as the Central Scientific Technical Fire Prevention Committee have defined the new decree for the safety of facades, which updates the technical guide of 2013 : The notification is to the corridor in Brussels and should be ready in 2022”.

The brigade: ‘Never seen anything like it in Milan’ – For now, the priority at the courthouse remains the safety of the building, because internal collapses are mainly feared and the need to tear down parts of the structure for safety, especially the “outer layer”, not excluded. Concerning the structural risk, the commander of Milan Giuliano Santagata he clarified that “it will be verified by a structural engineer. we say for precaution what the building is now unsafe. This facility was compromised of a fire and may suffer as a result injury. The verification will take place in the next few hours, there is a dangerous situation and this cannot be hidden, but no one can say whether the building will collapse. Never seen anything like this in Milan“, concluded the commander of the fire service and emphasized that it is” “plausible” that the facade “was made of” highly flammable material“. A statement confirming what already emerged on Sunday, namely that the material used was polystyrene. A contingency removed from the building manager, Augusto Bononi, who reported how the facade was composed of aluminum bond, a panel consisting of two external sheets of aluminium and a core of fabrics minerals flame retardant or refractory.

Residents: ‘The facade caught fire like a match’ – “To be 70 families without a home, we start all over again today,” says one resident. “I lived on the fourth floor. There is nothing left of the building.” Yesterday in a rush to escape “there are people who have left their pets at home” because “it was not thought to be so fast and devastating,” he added. The facade of the building caught fire “Like a Match”, such as “a handkerchief dipped in alcohol” and in less than 30 minutes it is consumed by flames, other residents of the skyscraper explained. Some have slept in a hotel a few meters from their home and still do not explain how it could have happened and ask that responsibilities be identified quickly. 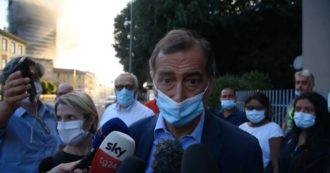 The couple: ‘We are homeless, we want justice’ – Silvana and Carmelo walked up the stairs that separated them from the exit as soon as they smelled smoke and saw the smoke spreading faster and faster from the floors above them to the stairs of the building. “We have the eleven slopes walking up stairs – they explained – We went down and saw that there were flames on the fifteenth floor. In less than half an hour, indeed in a few minutes, there was a match effect. I hope the judiciary inquire quickly why we stayed homeless. A ten-year-old building ended like this. We condominiums want some kind of justice. We saw a very rapid fire throughout the building.” On the accountability front, even the mayor Beppe Sala he quickly asked for answers: “The judiciary – he said – is already working to clarify the dynamics of what happened. I hope the responsibilities are quickly established. The Torre del Moro was built a little over 10 years ago and it is not acceptable that such a modern building has turned out to be completely vulnerable”.