When Jonnie Peacock had tasted the first pain of defeat and emerged from the longest three minutes of his life, he could think that he had just contributed to the greatest sprint final a Paralympic or Olympic Games has ever seen.

The really big are usually decided by a single dominant winner, with the exception of the women’s 100m Olympics in Atlanta, which was decided in Gail Devers’ favor with a photo finish.

But there’s never been anything like it: a race where three-hundredths of a second split the first four runners, with Peacock and Germany’s Johannes Floors so hard to split that they both took bronze. After three minutes and 17 seconds of consultation. 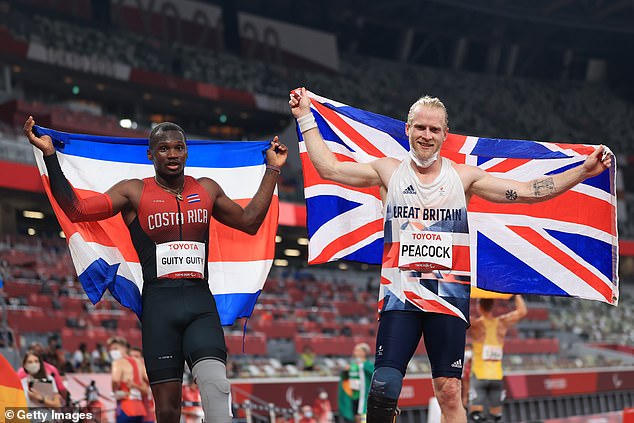 “Did this ever happen?” Peacock asked as he emerged, drenched in sweat that seemed to sting his eyes as he prepared to run. “I didn’t think you could share medals in sprints.”

Not in living memory.

In a technical sense, it was a dethronement for the sprinter who had never lost an international final; one whose triumph over Oscar Pistorius in London 2012 will be etched in our memories forever.

But these Paralympics needed a finish and competition like this. So much – too much – of British gold has been processions, without the drama and compulsive attraction that fuels sport. 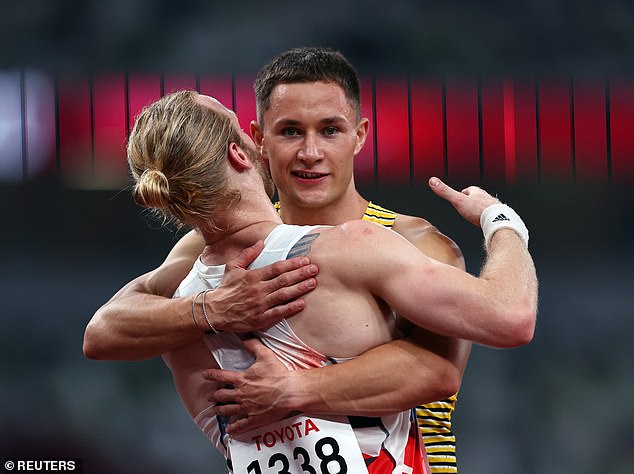 Peacock congratulated winner Felix Streng of Germany in the aftermath

Peacock, merciful and articulate even in this moment of loss, made just that point.

“If that’s not an advertisement for Paralympic sport in 11 seconds, then I don’t know what is,” he said.

More than halfway down the track, it looked like he was about to explode the superiority German Felix Streng had over him this season. And then Stern rocketed out of three lanes outside of him and drifted forward into the last 40 yards, causing Peacock to pump air.

The Briton gave a candid verdict on what, from that distance, should have been gold to him. “I’ve lost it,” he said. “My shoulders started to recede. I could feel it. For me, the position should be shoulders over hips.

“I didn’t do that in the last 20 meters and my top speed has let me down. I was just in the moment. All I can do is take full responsibility.’

The tone of these words was just as important as the content. Peacock was enthusiastic about the way the level of the 100m competition did not allow such a technical failure. The quality of the Paralympic spectacle was important to him.

There’s so much front and superficiality in the sport it can be hard to tell the pretense, but the look on his face when Stern appeared behind him and the mics told you he wanted this competition. He cherished these kinds of challenges.

‘Big man! Big man!’ said Stern, grabbing him by the shoulders. “Next year dude! Kobe, Kobe, it’s going to be fun!’ Peacock replied, referring to the 2022 Para World Championships in this country.

“I’m not afraid,” Stern grinned as he marched away

When David Weir walked through the same interview area after his disappointing wheelchair qualification in the 1500 meters earlier in the day, he suggested that Britain was being left behind by other countries making faster wheelchairs.

“We haven’t invested in the technology side of the chairs since 2011,” Weir said. “That’s 10 years, you know. I still have that frame, but it’s outdated. It needs updating.’

Peacock’s is a different discipline, but for his part, he said it was coaching, not technology, that made it more difficult and brought in new athletes like Sterng.

“With Felix, it comes down to coaching,” said Peacock. ‘That’s what it’s always about. We looked at blades in 2015 and we found that it was a 0.02 second difference over 60 meters.

“I moved coaches to Dan Pfaff and I took three tenths of my PB. Felix has moved from an old-fashioned German coach to an elite system and it has paid off.” That “new system” is Peacock’s former coach Steve Fudge, who helped Streng cut his times from 10.9 seconds to 10.6.

Peacock looked like he wanted to share expertise. “I think this is one of the best races at the Paralympics and that was the advertisement,” he said before leaving the scene.

“I’m proud to be a part of that. I am proud to be competitive. Four people on stage. I don’t think I saw that.’