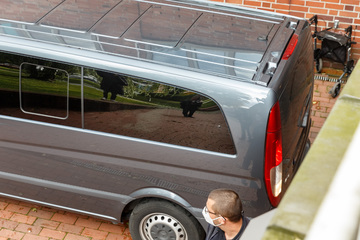 The 96-year-old defendant in what may have been the last Nazi trial in Germany before the Itzehoe court is now in custody.

Itzehoe / Lubeck – The 96-year-old defendant in what may have been the last Nazi trial in Germany before the Itzehoe court is now in custody.

According to information from the German news agency, she was taken to the Lübeck correctional facility. Female prisoners are held there.

The court ordered the suspect’s arrest on Thursday evening.

The criminal chamber reacted to this on the former secretary’s attempt at Stutthof concentration camp to evade the proceedings. The arrest has been ordered until further notice, a spokeswoman said.

Due to the absence of the defendants, the criminal chamber adjourned the trial until October 19.

The woman is accused in more than 11,000 cases of complicity in murder. As a typist and typist at Stutthof’s headquarters near Danzig, between June 1943 and April 1945, she is said to have assisted those in charge in the camp with the systematic killing of prisoners.

According to the Ludwigsburg central office responsible for investigating Nazi crimes, about 65,000 people died in the German concentration camp and its subcamps, as well as on the so-called death marches at the end of the war.

According to the court spokeswoman, the 96-year-old left her residence between 6 a.m. and 7:20 a.m. Thursday and took a taxi to Norderstedt/Hamburg-Ochsenzoll.

According to photo information, she was walking on the Langenhorner Chaussee in Hamburg in the afternoon when police officers noticed her.

According to a spokeswoman for the court, she wrote a letter to the court a few days before the start of the trial that she did not want to come.