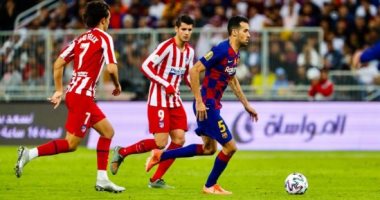 Atlético Madrid coach Diego Simeone revealed the list of Roji Blancos in preparation for Barcelona tonight, Saturday, in the eighth round of the Spanish League.

The date of the match between Atletico Madrid and Barcelona

Barcelona will host Atletico Madrid tonight, Saturday at 9 a.m. at the “Wanda Metropolitano” stadium, the stronghold of Rokhi Blancos, in the eighth round of the Spanish League 2021-2022..

Barcelona are sixth in the Spanish league standings with 12 points, collected from three wins and the same from draws, and the Catalan club has a postponed game..

While Atlético Madrid are fourth in the La Liga rankings with 14 points, they have won four games, drawn twice and lost once..

And the Catalan newspaper, “Sport”, stated that in tonight’s game, Roji Blancos will rely on a double, Antoine Griezmann and Luis Suarez, following their departure from the Camp Nou..

Luis Suarez only played one game against Barcelona last season, ending in a goalless draw, while missing the first round match due to the new Corona virus infection..

On the other hand, Griezmann played a total of 26 games against Barcelona in the shirts of Real Sociedad and Atlético Madrid, scoring six goals and providing five assists, including all of them, and racking up just four wins, losing 16 and drawing. in 6 games..

The French star, in 12 games against Barcelona in La Liga, Antoine Griezmann did not score a single goal against the Blaugrana..