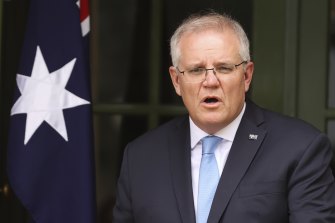 Australia has six former prime ministers rattling around the country, a mixed bouquet of personalities and ideas, all sharp in their own way. Kevin Rudd was the one who famously said he was here to help, but actually all the ex-prime ministers at the moment are doing their best to offer ideas and criticism, although some of them are less constructive and more… ballistic.

With the exception of Julia Gillard, who is sticking to issues within her new post-political portfolio (mental health and women in leadership), the ex-prime ministers come up with thoughts about our relationship with China, nuclear submarines, Australia’s invasion of Afghanistan and how far the French have a right to be pecked at us.

Tony Abbott has been unusually discreet for a while, as if sitting out his turn, but that came to an end on Friday when he published an op-ed in the Australian. If Scott Morrison didn’t have an agenda when he took on the premiership, and is now striving for it, Abbott will gladly give him one.

Abbott’s reformist zeal (which has always conflicted with his identity as a conservative) has not diminished with the passage of time. He suggested a post-COVID policy agenda for Morrison, including vetoing the design of the national curriculum (too politically correct), spending cuts on immigration, building new “low-emission” coal-fired power plants (I hear so much about these low-emissions factories, but I have yet to meet one – are they avoiding me?), a halt to the pension guarantee increase, and a Senate constitutional amendment to make it easier for governments to implement their agendas.

Abbott may have a slight personal bias here — his sweeping, welfare-austering 2014 budget was largely blocked by the Senate. It seems strange to single out an entire parliament building as a target for personal revenge, but Abbott was always unusual.

Morrison is unlikely to bring a proposal for a referendum on constitutional reform to the Senate in the next election. The prime minister is also unlikely to propose building new coal-fired power plants – the famed coal-lover has long since moved away from fossil fuels in his rhetoric. He just did it quietly because the Nationals don’t need any more startling ones—they’re surprising enough as it is.

Despite the theater recently delivered by their outspoken rightists (George Christensen calls for police arrest, Matt Canavan claims Britain’s empty supermarket shelves are caused by emissions reductions), there are only about six Nats in a banquet hall of 21 who say they are adamantly opposed to a net-zero target by 2050. Nationals leader Barnaby Joyce will have to negotiate with the Prime Minister to make it happen, because otherwise the government risks losing the next election.

Even if you don’t believe in climate change, you do have to believe in capital markets — and they’re moving away from carbon as fast as crickets.