Since they were beaten by Melbourne in the Melbourne decider last year, a number of Panthers players have played in two State of Origin series. 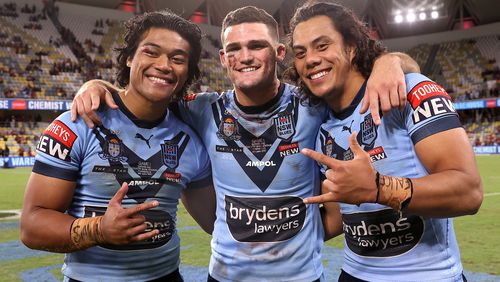 Although the Panthers are a young group in age, Sterling believes the experience Ivan Cleary’s team has will be vital.

“Although they are the youngest team in the final, I love that they have a lot more experience when it comes to big games,” Sterling told Nine’s. NRL Sunday Footy Show.

“Seven of them played in the Origin series this year, there was an Origin series after last year’s Grand Finals, so they now have the big games under their belt.

“Last year’s pain is significant, but to me they’re just a much more experienced group now.”

Young players who know what it takes in pressure situations to get the job done and I think they are well prepared to do that tonight.

“Many of the Panthers who played at Origin level were on Brad Fittler’s Blues squad and he appreciated the way they attacked this season after last year’s disappointment.

“They love what they do and they show up every day smiling, ready to go. No matter what you ask them, they just attack and that is clearly what they have done.

“Since the grand final last year they went away and said, ‘We have to get better’, and that’s how they approached their season and their training every day.” They all seem to have improved.

“I thought Stephen Crichton had a bit of a slow start to the year. He changed positions and that might have hurt the ego a little bit, but he was fantastic on the wing and played fullback and did a great job.

“Nathan Cleary added something to his game, his kicking was invaluable in the final as they only really scored goals. I feel like they’ve all improved.”