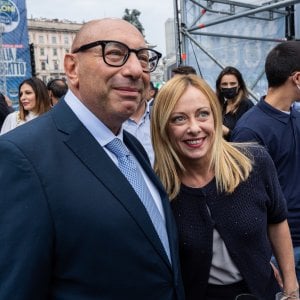 Carlo Fidanza, MEP for the Brothers of Italy, and Roberto Jonghi Lavarini, known as the “Black Baron,” are being investigated for the illegal financing and money laundering hypothesis in the Milan investigation that stems from Fanpage’s journalistic investigation into alleged black people. funds to finance the FdI election campaign in Milan. The GdF’s economic-financial police unit, delegated by the Milan prosecutor’s office, searched the house, as well as other places in Jonghi Lavarini’s availability, and seized IT equipment.

The black lobby supporting the FDI election campaign in Milan. Dureghello: ‘There is no place for those who praise Hitler’

Not searched, given his institutional role, the house of Fidanza who suspended himself from his party after the broadcast of the first episode of the investigation, on the basis of which the prosecutors Piero Basilone and Giovanni Polizzi, coordinated by the deputy prosecutor Maurizio Romanelli, have investigation file opened with the hypothesis of illegal financing and money laundering crimes. There are no other suspects at this time. “I learned from the press that after the Fanpage investigation I was registered in the suspects register,” said Fidanza. “At the moment I have not received any official communication. I am calm and of course at the disposal of the Public Prosecution Service to clarify all aspects of this case as soon as possible”.

Chiara Valcepina, the lawyer of the investigation into the black lobby that supports FdI, joins the city council in Milan

Both are under investigation for the two crime hypotheses being challenged in the investigation based on the sentences handed down in the video recorded with a hidden camera by the Fanpage journalist. Prosecutors yesterday obtained the full video recording (more than 100 hours) of the dialogues between the reporter pretending to be an entrepreneur interested in financing the election campaign of the candidates of the party of Giorgia Meloni, Jonghi. Lavarini – many of whom in FdI have distanced themselves in recent days – the MEP and Head of Delegation of the Brothers of Italy Fidanza and the new councilor of the Municipality of Milan, and at the time an Fdi candidate, the lawyer Chiara Valcepina (who is not is currently under investigation). In these dialogues, Jonghi and Fidanza explain an alleged “laundry” system to clear out money paid by the black – the “black”, as the possible illegal financing is defined in the recordings – which is intended for the election campaign and is also used for other elections. And then also encounters with explicit racist, fascist and sexist jokes as well as references to Hitler’s speech in the Munich brewery and Roman greetings.