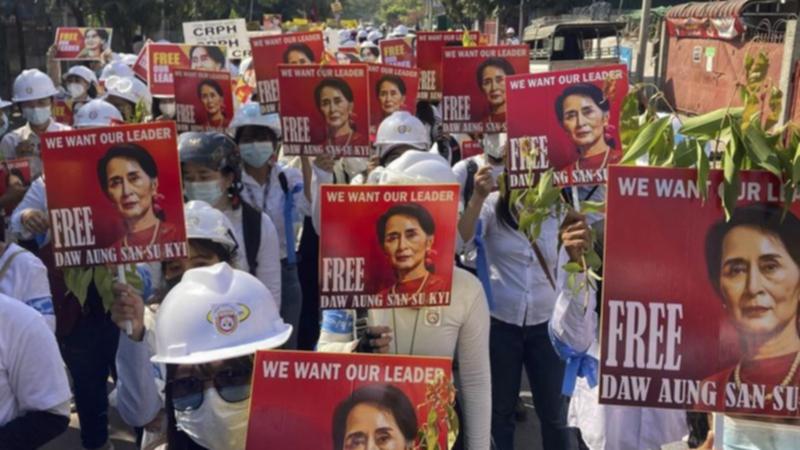 Myanmar’s deposed leader Aung San Suu Kyi will testify in court for the first time in one of several cases against her since the military took power in February.

She and two co-defendants charged with sedition will testify in their own defense but will not call any other witnesses, lawyer Khin Maung Zaw said.

The prosecution has finished presenting its witnesses in the case which is being heard in a special court in the capital Naypyidaw.

Suu Kyi’s supporters and independent analysts say the charges against her are contrived and attempt to discredit her and legitimize the military’s takeover.

She is being tried by the same court on two counts of violating the COVID-19 pandemic restrictions during the 2020 election campaign, illegally importing walkie-talkies and subsequent use of those radios without a license.

Sedition, defined as spreading false or inflammatory information that could disrupt public order, is sometimes referred to as sedition and is punishable by up to three years in prison.

The case concerns statements posted to a Facebook page of her National League for Democracy party after she and other leaders were arrested.

All proceedings against Suu Kyi are closed to the public and press. She is being held by the military at an undisclosed location in Naypyidaw.

Her co-defendants in the sedition charge are former Vice President Win Myint and former Mayor of Naypyidaw, Myo Aung. All have denied the allegations.

Faced with further cases on Tuesday, 76-year-old Suu Kyi asked the court for health reasons to hold Monday and Tuesday sessions only every two weeks. The court is expected to rule on her request on October 12.

During a separate trial of Suu Kyi on Friday on charges of corruption, a former political ally testified that he handed her large amounts of cash and gold.

Suu Kyi faces four corruption charges in these proceedings, each of which carries a prison term of up to 15 years, the longest possible prison term for the numerous offenses she has been accused of.

Preparations have also begun to try her for violating the Official Secrets Act, which carries a maximum sentence of 14 years.

The military seized power just before Suu Kyi and her National League for Democracy were set to start a second five-year term in office.

It said it acted because last November’s elections were marred by widespread fraud, a claim that is widely questioned.

Protests against the military takeover continue and have killed more than 1,000 civilians so far.