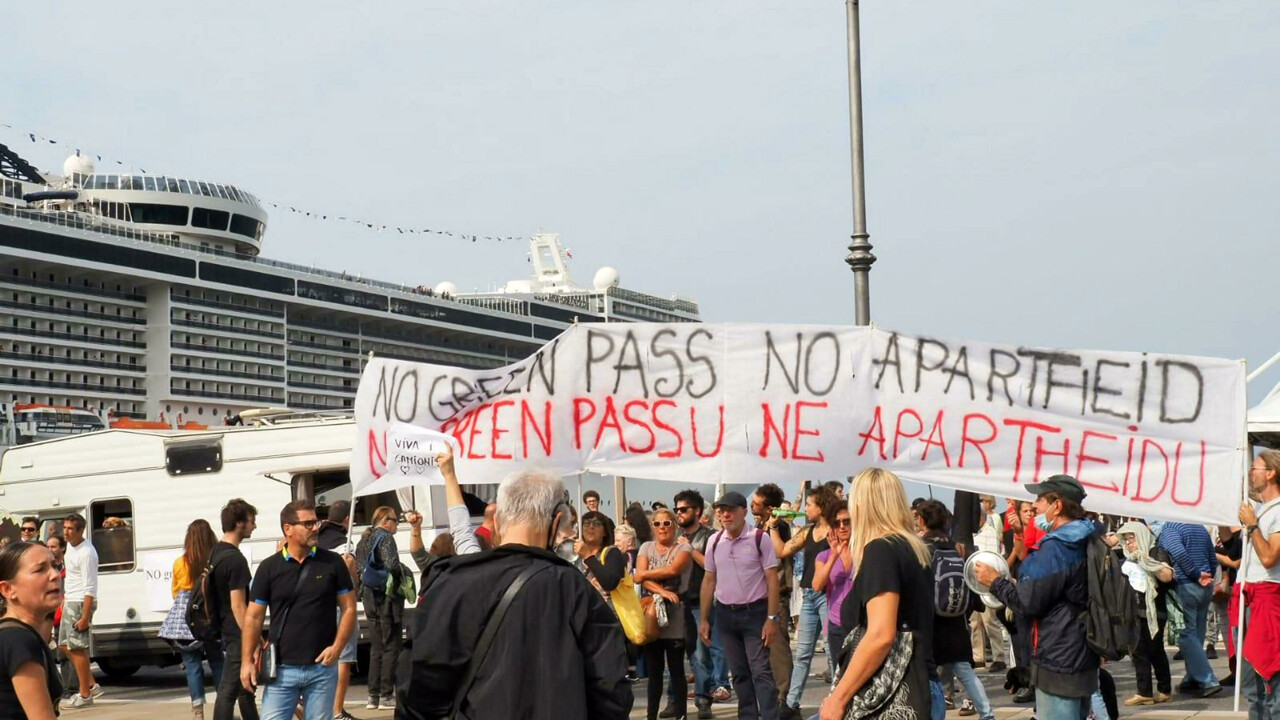 High tension for the Green Pass Day when Italians have to show their vaccination passport to work. The categories are on a war base because, despite a quota of unvaccinated people, they don’t want to deprive people of work. In the foreground are the dock workers, who are preparing for a general strike, the hottest core of which is the port of Trieste, where Stefano Puzzer, spokesman for the Julian dock workers, told Today: “No mediation with those who want to protect the freedoms and rights of Italian citizens. The only possible way for us is the abolition of the Green Pass.” Arms crossed to the bitter end until the goal is reached, even if there were divisions among the workers: all for the strike, but there is there is no consensus on the idea of ​​taking it to the bitter end.Faced with a government determined to go straight, there are those who fear for their jobs.

Meanwhile, the front of the protest is expanding from ports to highways. “If foreign carriers can come to Italy without the green pass and it is imposed on Italian companies instead, we will consider inviting companies to stop the trucks. We hope not, but we are talking about it,” said Conftrasporto-Confcommercio president Paolo Uggè. The national industry association of road hauliers, Assotrasporti, is also pessimistic, putting the risk of the entire “transport in Italy being blocked” on October 15-16.

But the hottest front remains the port of Trieste. In these hours the workers negotiate with the president of the region Massimo Massimiliano Fedriga, even if the one between institutions and workers does not seem to be a mediation because Puzzer does not seek compromises. Either he takes the Green Pass or he strikes. Blackmail? “No, – Puzzer always says – It is blackmailed by the state when it does not oblige you to take the vaccine, but forces you to go to work with the Green pass”. And if you consider that about 40% of the dock workers in Trieste do not have a green passport, there is a risk of total blockade in the Friulian capital, with unimaginable damage.

Strike by the dockers of Trieste against the Green Pass

But the rift in the economy of a country that has just risen has already begun. On the desk of one of the major terminal operators in the port of Trieste, the number of cancellations from the Eastern Mediterranean is growing hour by hour, generating incalculable losses. While the front of the main airport in Italy for handling (and one of the largest at the continental level thanks to connections with Central and Eastern Europe) is mobilizing to block operations in view of October 15, on the other hand, the possible solutions very distant. The government is not stepping back, says the Trieste Port Workers Committee (CLPT). A week ago they asked for tampons, today they are aiming to withdraw the Green Pass.

The risk of the port of Trieste being blocked is real. The scenario is that of an economic catastrophe. The first to leave the Adriatic port are the organizers of Formula 1. The cars and logistics of the Istanbul Grand Prix were in fact at home in the Julian capital, using the highway of the sea built between the port and Turkey . The return is already planned for Marseille. The chaos of the Green Pass is not present there. The ClpT goes straight ahead and knows no mediations or compromises. The chairman of the Adriatic Port System Authority Zeno D’Agostino flew to Rome to try to convince the government to apply an exemption to the Green Pass. Draghi doesn’t give up. The Veronese manager at the helm of the Julian port has threatened to resign.

One scenario is that involving the devastating economic and image repercussions for the entire city. Just a few weeks ago, the government sent Minister Giorgetti to bless British American Tobacco’s €500 million investment in the freight village of Trieste. Salvini, on the other hand, winks at the anti-Green Pass protesters and supports the dock workers’ protest. On Friday, the ClpT threatens to block the gates and the critical problems also come from the lack of green certificates among truck drivers. Most come from Eastern European countries and according to the Rai of Friuli Venezia Giulia, at least 30 percent are not vaccinated. The main Italian port is in danger of being paralyzed. In the background is the mood to crown the city’s next mayor. On the one hand, there is the outgoing mayor, Roberto Dipiazza. On the other side the dem Francesco Russo. The government has given the green light for the 416 million euros that the PNRR has planned for the airport. In short, the game being played in front of the port of Trieste is much bigger than the protests.

Strike against the Green Pass: monitoring in ports

The Friulian capital is probably a powder keg. Reassurances are coming from different parts of Italy, although no one a priori excludes critical problems and inconveniences. The port of Venice should not be in trouble from Friday: “In Venice, most workers are vaccinated, an alignment with the national data is estimated, namely about 80%. The risk could be shifted to other aspects of the logistics chain : – speculates Alessandro Santi, the national president of Federagenti – there could be a breakdown in the road freight sector, so industries and inter-ports could also face problems”.

In Genoa, some terminal operators are standing by to pay tampons to employees who do not have a Green Card. This was confirmed by Beppe Costa, president of the association of Genoese terminal operators of Confindustria at the end of a meeting in the prefecture where it was revealed that there are an estimated 20% of unvaccinated workers in the Ligurian port.

Even in Puglia, where there are five major stops, there should be no problems: Manfredonia, Barletta, Bari, Monopoli and Brindisi. The Secretary General of the Port System Authority of the Southern Adriatic, Tito Vespasiani, said that “in some sectors vaccination coverage is reaching 100%”. tensions in Trieste.

The same exploration also took place in the Tyrrhenian ports of Piombino and Livorno, where the System Authority does not register specific critical problems. That is stated today in a note from the Authority itself. In Tuscany, companies have reported that they have no specific critical operational issues”.