Israel, Jordan and the United Arab Emirates will reportedly sign an agreement next week, according to which a solar cell plant in the Jordanian desert will generate electricity for Israel in exchange for a desalination plant in Israel that will supply Jordan with water.

According to the report on the Walla news site, the agreement is scheduled to be signed in Dubai next week after months of secret negotiations between the three nations. It was supposed to be signed two weeks ago at the International Climate Conference in Glasgow, but Prime Minister Naftali Bennett requested that it be postponed until after Israel’s controversial budget votes.

The report, which quotes five Israeli officials familiar with the negotiations, claims that the Biden administration was also aware of and involved in the massive project. US Special Envoy John Kerry reportedly spoke several times with both Secretary of State Yair Lapid and Jordanian King Abdullah about the proposal.

Under the terms of the agreement, a UAE company will build the solar plant in Jordan, from which Israel will purchase electricity. The agreement was reportedly first raised at the September meeting between Elharrar and the United Arab Emirates’ ambassador to Israel, Mohamed Al Khaja, during discussions on how the United Arab Emirates can help mediate future regional agreements following the Abraham agreement.

Elharrar met with Jordan’s Al-Najjar last month for a signing ceremony doubling the amount of water Israel supplies to the eternally dehydrated Jordan. That agreement, she said at the time, is proof that “we want good neighborly relations” with Jordan. 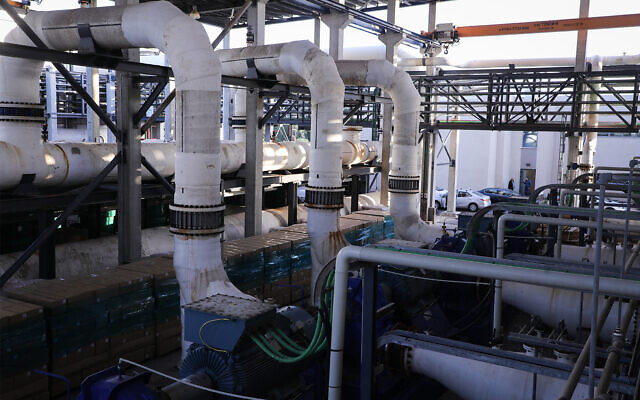 Despite signing a peace deal with Jordan 25 years ago, relations have been remarkably cool in recent years, especially during the tenure of former Prime Minister Benjamin Netanyahu. But with the new government led by Bennett in place, signs of thaw have emerged with Israel’s eastern neighbor.

Jordan’s cooperation with Israel on water precedes their 1994 peace agreement. Israel is also a hot, dry country, but desalination technology has opened up opportunities to sell fresh water.

Two weeks ago, Economy Minister Orna Barbivai and her Jordanian counterpart, Yousef Alshamali, met in Jordan to discuss bilateral relations, the first meeting of its kind in a decade.

In July, Bennett met with King Abdullah II in secret at the Crown Palace in Amman, at the first summit between the countries’ leaders in over three years.

Give a Hanukkah gift that illuminates

Here is a Hanukkah gift that stimulates knowledge and insight about Israel and the Jewish people.

A Times of Israel Community Gift Membership entitles your recipient to a one-year membership benefit at a special discounted price.

Learn more Learn more Already a member? Log in to stop seeing this