In the autumn, the Street Artist Ardif installed in the Zoological Park in Paris his collages of creatures half animal, half machine. Faced with the inhabitants of Vincennes Zoo, these mechanisms bring a little art to the alleys and depressions of the establishment of the National Museum of Natural History.

Recently, wonderful creatures have joined the Paris Zoo. On the occasion of the Rendez-vous sauvage d’automne and its theme “In Search of Fascinating Species”, the establishment of the National Museum of Natural History (MNHN) invited Ardif to install several of his works on the route. . Thus, since October 23, giraffes, lions, wolves and bats have been rubbing shoulders with the street artist’s mechanical animals in a treasure hunt that combines nature, art and imagination.

A first carte blanche given to a street artist

For this first collaboration with a Street Artist at the Paris Zoo, it seems that things have gone quite naturally. After discovering Ardif’s collages on the walls of the 13th arrondissement during the confinement, Pierre-Michel Forget, professor of tropical ecology at the MNHN, goes to meet the artist under “Ardif. Let’s go into the woods” at the Cabinet d’amateur (Paris , XI. Arrondissement) and asks him to come to the Zoo to create a unique carte blanche. “ I grew up in Vincennes. This order is for me a culmination, a reward, the artist explains during his conference on October 30 in the Park. Discovering species, being able to draw animals that I had never represented before, gave me new desires to draw. » 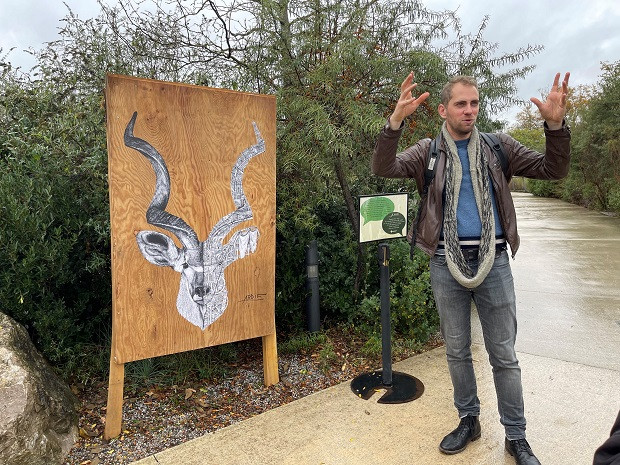 Ardif in front of his Grand koudou in the Paris Zoo. © Agathe Hakoun

After a year of discussions, scout work, preparations, drawings, collages and paintings, 17 Mechanical animals joined Vincennes Zoo to create a true Street Art version of safari. Microscopic, monumental, extinct, imaginary, amazing species … Ardif’s bestiarium here consists of lion, giraffe, penguin, bat, spider, lemur but also tardigrade or even a blue dragon inspired by Japanese legends. Each creature’s fur, plumage or other shell is interwoven with gears and mechanics Steam Punk, reminiscent of 19th-century architectural drawings, a hallmark of the artist (who trained as an architect) since his inception on the streets five years ago. 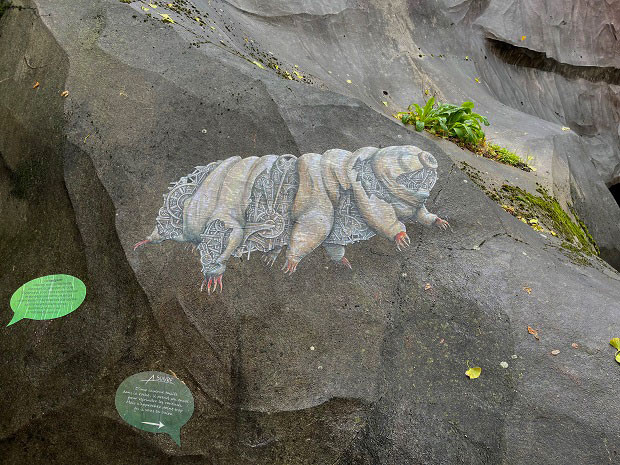 If initially the exposure of these Mechanical animals only planned during the two weeks of the All Saints holiday, these extraordinary animals will finally remain visible until they are degraded by bad weather. Visitors can thus continue their safari in the park’s alleys and depressions in search of these amazing hybrid creatures and hope for future Street Artesques collaborations within the museum’s institution. On the Ardif side, in 2022 the artist will give up the time for one solo show his usual fauna to show at the H Gallery (Paris, XI. arrondissement) his “Mechanatomy” and this time exploring the theme of the human body.