When Dominic Cummings abruptly left Downing Street as Boris Johnson’s chief adviser last year, a new team of number 10 officials ushered in an era of harmony and competence, with an end to the factions that undermined the British Prime Minister’s first 18 months in office.

But a year later, the problems remain at the heart of the British government. Several ministers, officials and lawmakers have told the Financial Times that a sense of urgency has developed in the Johnson administration.

The clearest sign of this dysfunction is the number 10’s deteriorating relationship with conservative MPs over a series of political missteps, starting with a messy attempt to revise parliamentary standards to save the disgraced former Tory minister Owen Paterson.

MPs are increasingly blaming Johnson’s number 10 operation, which they believe lacks political experience and is struggling with a number of major challenges this winter – including the cost of living pressures involving rising energy prices, disruption of the supply chain in the run-up to Christmas and rising pressure on the NHS , partly due to Covid-19.

Uprising from conservative MPs has highlighted the unrest. In a crucial vote in the House of Commons on social care reform this week, the government majority was cut from 79 to 26, to the tory-whipping alarm. A longtime ally of Johnson admitted: “This is the first major turbulence we have experienced.”

Senior Conservatives disagree on whether this is typical of a government two years into office, or is a sign of deeper issues concerning Johnson himself and how his government works. One minister said: “Every government goes through a phase where something happens and the prime minister probably needs some rest.” Another added, “It’s just a bump.”

But some in the government claim that there are structural problems behind the dissent, while others put them down to Johnson’s personality. A Whitehall official described recent weeks as “a series of unforced errors that cross the path of a battle with your own people that you would not get with a well-functioning team”.

Officials working closely with the prime minister acknowledge that the atmosphere at number 10 has improved since the Vote Leave faction, led by Cummings, left. They say there is a greater sense of unity despite the emergence of different camps.

A Downing Street veteran felt there was more focus under the new regime. “Last year there seemed to be u-turns every week because Dominic Cummings would make decisions and then Boris Johnson would see what happened and say, no, I do not want this and then politics would be dropped ,” he said. said the official.

But the U-turns have not stopped. Another senior government figure dismissed the lack of “strategic direction” in the government. “Everything feels pretty scratched and scratched. The Peppa Pig incident [at Johnson’s CBI speech on Monday] was a vector to capture a broader accident over the operation. “

Number 10 is roughly divided into four groups, each with separate priorities fighting for the Prime Minister’s ear. The dominant camp consists of senior aides who have close ties to the level up secretary Michael Gove. The “Gove gang” counts among its members key advisers who have the most access to Johnson.

The dominant faction in Johnson’s Downing Street is a group of mostly young advisers who have worked closely with Michael Gove, the secretary of the level up. Many also have close ties to Carrie Johnson, the Prime Minister’s wife. The Gove gang robbed the Vote Leave faction, which was broadcast from number 10 with Dominic Cummings’ departure last year. Their reach extends far beyond Downing Street, with key allies installed in other Whitehall ministries.

Political instincts: Pro-Brexit, ambivalent over traditional Tory economics, with a clear focus on delivering improvements in living standards and public services to the “red wall” of former Labor heart areas.

The second most powerful faction is a group of officials, most notably Cabinet Secretary Simon Case and Chief of Staff Dan Rosenfield, who worked in the Treasury Department as senior mandarin for many years.

Whitehall officials thrive in a power vacuum and no more than the two most senior figures in Downing Street. Dan Rosenfield, an 11-year-old finance mandarin, was recruited as chief of staff with orders to instill discipline and leadership competencies. He found a close ally of the young Cabinet Secretary Simon Case and other officials. But some fear that the faction lacks the political instincts to cope with a mercury figure like Johnson.

Third is the Joint Economic Unit of Special Advisers, which is shared with Chancellor Rishi Sunak and sets the government’s agenda in many areas of domestic policy, but which has increasingly been in conflict with others in number 10. Johnson’s team was appalled at where openly Sunak defied Prime Minister on Covid-19 restrictions over the summer. An insider called the relationship with the chancellor’s team at number 11 “pretty awful”.

Downing Street declined to comment on reports of factional fighting. A spokesman said: “The Prime Minister and the Chancellor and the whole government are simply focusing on moving forward on delivering on the priorities of the people.”

Tensions between the Prime Minister’s Office and the Ministry of Finance have undermined successive governments. Johnson sought to address this by creating a joint team of special advisers who would work across Number 10 and Number 11 Downing Street to even out political differences. Under Chancellor Rishi Sunak, the team got off to a good start with Johnson’s other factions. But some are increasingly concerned about the group’s independence, and more clashes are said to be taking place with other factions.

The last camp includes those who worked with Johnson at London City Hall during his tenure as mayor of the capital. The Prime Minister’s longest-serving ally is in this group, and he recently empowered them with his decision to re-employ former City Hall fixer Ben Gascoigne as deputy chief of staff.

Johnson’s longest-serving allies are those who worked with him when he was mayor of London. They are intensely loyal and understand his talents and weaknesses and long experience of working closely with him. Sir Eddie Lister’s departure as prime minister’s top fixer this year weakened their influence, but Ben Gascoigne’s recent return suggests they remain Johnson’s allies in a time of crisis.

Political instincts: Pro-Johnson above all else. Brexit supporters who enjoy engaging in cultural and intellectual debate.

Critics complain that Johnson’s inner team is incoherent and lacks traditional Tory voices that will challenge him when making bad decisions. “Even in Henry VIII’s court, he had people who would have said to him, ‘this is a bad strategy,’ or ‘this is tone deaf,'” a Whitehall official remarked.

Still, some tories believe the focus on the Downing Street operation is a red herring, and lawmakers must come to terms with Johnson’s unique style of governing. “Everyone is talking about the number 10 team, but basically this is about the boss. He’s a celebrity, not a conventional Tory, and people have to let Boris be Boris,” said one minister.

Another official said the attempt to save Paterson spoke to Johnson’s personality. “The problem is that we have a prime minister who makes decisions because MPs have whispered in his ear, that is one of his weaknesses. But every PM has a weakness of some kind.”

Few in the Tory party or Downing Street believe a serious leadership challenge is imminent. A handful of letters of no confidence have been sent to Sir Graham Brady, the Tory magnate representing Conservative MPs on the back table, but it is nowhere near the 54 required to trigger a formal competition.

An ally of Johnson rejected a challenge, pointing to his popularity among voters. “Who else could command that size of the electoral coalition? You have to be quite sober to think you could connect the Red Wall and the South.” 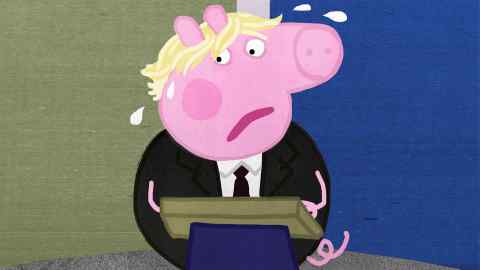 But even as the talk of a leadership challenge unfolds, Johnson’s team stands ready for a difficult period. Ministers hope that the forthcoming publication of a government white paper on its agenda to “upgrade” Britain and tackle regional inequalities will be a reset moment.

Parliamentary relations are expected to remain full, and officials accept that it will be difficult to secure support for controversial polls in the wake of Johnson’s U-turn on his efforts to save Paterson. Many on the Tory benches were reluctant to support the attempt to acquit the MP and resented being left exposed to public anger after the Prime Minister’s swift return.

“The consequence of the Owen Paterson affair is that it has undermined the office of the whips. “The danger is that there will be another vote in the coming weeks where they have to keep track of the ranks.”

Senior aides at the Conservative Party’s headquarters hope more discipline will return as the government moves into a “campaign phase” in early 2023. Isaac Levido, the Australian political consultant who was behind the successful Tory election campaign in 2019, is likely to take a more formal role on strategy at this point, insiders suggested.

Despite the recent turbulence, those close to Johnson remain phlegmatic. One minister said number 10 was “lucky” that Christmas was near, suggesting that the momentum of anger is likely to disappear during the Christmas season. “It would have been more dangerous if it was another time of year. So far, I think it will be fine.”

One minister added that the recent unrest had not resonated outside Westminster and that the prime minister’s position was secure. “Looking at the polls, we’re still on par with Labor. If we were in real trouble, they would definitely be miles ahead.”