This week, events unfolded in Ankara that would have been unthinkable not so long ago: Mohamed Bin Zayed, the powerful Crown Prince of Abu Dhabi and the de facto leader of the United Arab Emirates, flew out to Turkey to meet with President Recep Tayyip Erdogan. Following Wednesday’s meeting, the two countries entered into multi-billion dollar cooperation and investment agreements in trade, energy, technology, banking and investment.

The last visit to Turkey by MBZ, as he is popularly known, was in 2012. In the ensuing decade, bilateral relations between the nations collapsed.

In the wake of the so-called Arab Spring, which overthrew Sunni Arab regimes throughout the Middle East, Erdogan began pushing for a regional order rooted in political Islam, supporting the Muslim Brotherhood in Egypt and the Islamic Ennahda party in Tunisia. In this project, Turkey allied itself closely with the UAE’s neighbor Qatar, which also sought to expand its influence through Islamist movements.

The United Arab Emirates, which saw the Muslim Brotherhood as a concrete threat to its own internal stability, regarded the burgeoning Turkey-Qatar network as its main opponent in the region, a more pressing threat than that posed by Iran. Abu Dhabi sought to counter Turkey’s burgeoning Islamist network with its own alliance based on a moderate, pro-Western model.

Turkey, meanwhile, was fighting back on the ideological front. Ankara pressed for the statement that it represented democratic rule against authoritarian monarchies in the Gulf and – after Egypt’s Abdel Fatah el-Sissi led a military coup in 2013 against Muslim Brotherhood President Mohamed Morsi with the backing of the UAE and its Gulf allies – against military regimes such as. in Cairo.

The affair reached a nadir in the wake of the military coup attempt against Erdogan in 2016. Turkish intelligence sources then accused the United Arab Emirates of sending money to the plotters through former senior Palestinian official Mohammed Dahlan, who is believed to be a close confidant of MBZ. 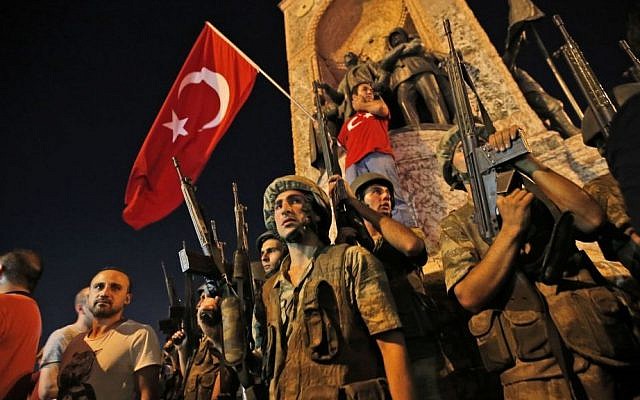 The rivalry bled all over the region.

In 2017, the United Arab Emirates, Saudi Arabia, Bahrain and Egypt blocked Qatar and accused Doha of supporting terrorism and being too close to Turkey and Iran. Senior officials in the United Arab Emirates were particularly resilient in their condemnation of a new Turkish military base in the peninsula. In 2020, UAE Secretary of State Anwar Gargash said that “the Turkish army in Qatar is a source of instability in the region. Our region does not need regional protectors or the restoration of old colonial ties.”

The crisis was finally resolved earlier this year.

The UAE has also sought to join the EastMed Gas Forum, an alliance of Turkey’s regional and European rivals seeking to develop and protect their natural gas assets in the Mediterranean. 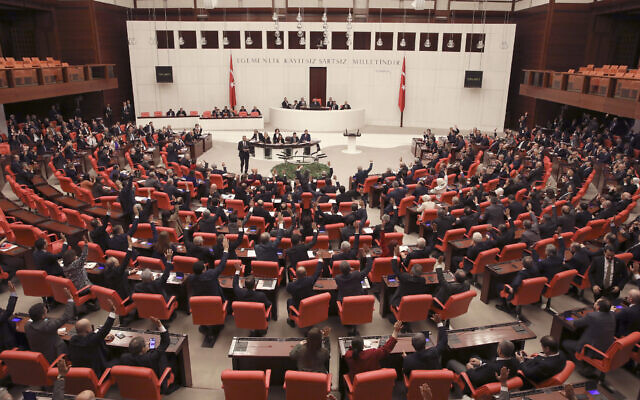 The Horn of Africa was another arena for rivalry. Turkey has invested heavily in Somalia, while Qatar, which has been an important presence in the region for many years, has led peace efforts in Sudan, Eritrea and Djibouti. Meanwhile, Saudi Arabia and the United Arab Emirates are investing heavily in Ethiopia and see the Red Sea region as critical to their own security.

Following the announcement of the Abraham Accords in August 2020, Erdogan – whose own country shares open, whose full ties with Israel – threatened to normalize relations between Israel and the UAE, by suspending diplomatic relations with Abu Dhabi. “The move against Palestine is not a step that can be tolerated,” he said.

According to Moshe Albo, a modern Middle East historian and researcher at the Dado Center for Interdisciplinary Military Studies, “The rivalry between the United Arab Emirates and Turkey in Libya, the Horn of Africa and the EastMed creates areas of friction – through proxies, but still very clear – between the two countries that characterize the last decade.

“It is not only ideological, geopolitical, it is also personal. So is Erdogan himself. “

And yet the powerful leaders of the two countries met despite the ongoing, multidimensional feud and signed agreements this week in which both sides sound optimistic.

Several factors pushed them toward the meeting and the less antagonistic relationship it may be.

First, the UAE, whose prosperity has traditionally been rooted in its oil and natural gas reserves, has made a strategic decision to rapidly diversify its economy.

“The great strategy of the United Arab Emirates is to position itself as a hub for global trade, linking economic interests between East and West,” explained Brandon Friedman, research director at the Moshe Dayan Center at Tel Aviv University. “Given the pandemic and the global economic downturn, the UAE saw opportunities to promote intraregional trade.”

Abu Dhabi also noted that Turkey is facing a series of crises at the same time. After spending most of the last decade picking up battles with regional rivals such as Greece and Egypt – and of course Israel – Ankara have found themselves more and more isolated lately, with Joe Biden, a personal opponent of Erdogan, now in the White House. 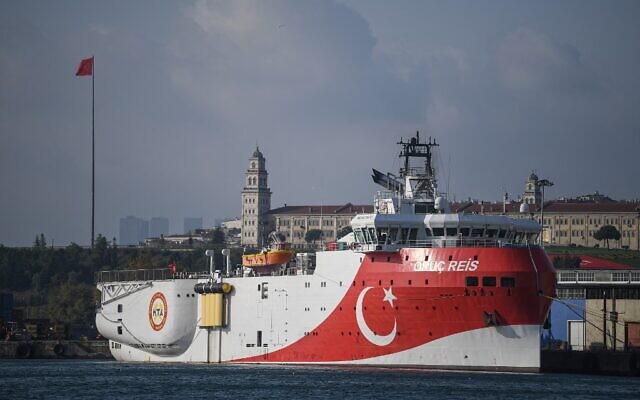 This file image taken on August 23, 2019 in Istanbul shows a Turkish seismic research vessel docked at Haydarpasa port searching for hydrocarbons, oil, natural gas and coal reserves at sea. On 11 August 2020, Greece demanded that Turkey withdraw a research vessel at the heart of its growing dispute over maritime rights, and warned that it would defend its sovereignty (Ozan KOSE / AFP)

In addition, Turkey’s lira continues to fall and inflation in 2021 is approaching 20 percent.

“Turkey’s regional isolation and slow-motion economic crisis have provided the UAE with an attractive economic opportunity to invest on favorable terms in the Turkish economy,” Friedman said.

It seems that Turkey also understands the weakness of its position. Turkish authorities have ordered the media of the Muslim Brotherhood in the country to stop attacking Egypt’s Sissi regime, and Qatar has followed suit. Erdogan has recently made conciliatory statements to Greece, the EU, Egypt and Israel. 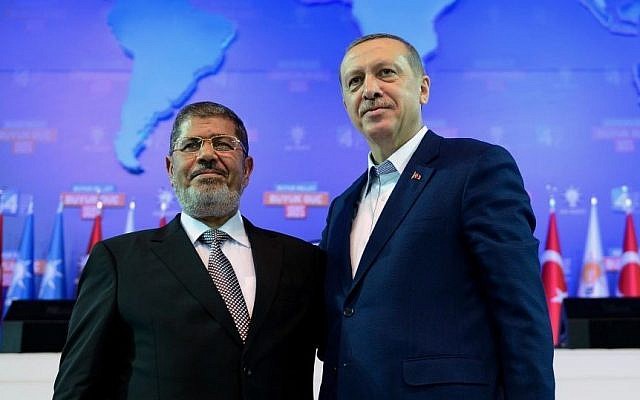 The United Arab Emirates appears to be betting that changes in Turkey’s fortunes will make it more likely to compromise natural gas exploration in the eastern Mediterranean, a potential economic blessing as European demand for natural gas continues to rise towards winter.

The election of Biden in the United States, which is also a key factor in changing Erdogan’s approach, prompted US allies across the region to change their approach as well. They concluded that the United States is determined to conclude an agreement with Iran, that US involvement in the Middle East is declining and that there will be a particular focus on their domestic human rights policies.

For the UAE, this prompted its leaders to seek to reduce tensions and seek dialogue with Iran, Syria and Turkey.

“We are seeing more dialogue in the region and fewer proactive steps than before,” explained Moran Zaga, an expert on the Gulf region at Mitvim – the Israeli Institute of Regional Foreign Policy. “There are many conflicting interests, but the path that regional states choose is changing in the direction of soft power.”

Today in Ankara, I met Turkish President Recep Tayyip Erdogan and we had fruitful discussions that focused on opportunities to strengthen our economic ties. We look forward to opening new and promising horizons for cooperation and joint work that will benefit the two countries and achieve their common interests and ambitions for development and prosperity. pic.twitter.com/ZkPFo3AQLj

The United Arab Emirates remains highly suspicious of Turkey and its allies, but is willing to pursue a pragmatic ad hoc policy of dialogue when it serves its interests.

For Israel, there are also potential opportunities in the new Middle Eastern reality.

“The Turkish-Emirati-Israeli connection is still under the table, but it exists,” Zaga said. “It may be that we got a hint about it with the release of the Israeli couple.”

Tourists Mordy and Natali Oknin were released by Turkey this month after spending eight days in jail for photographing a palace of Erdogan, in a drama that gripped Israelis for fear the two bus drivers risked lengthy jail time of improbable allegations of espionage. 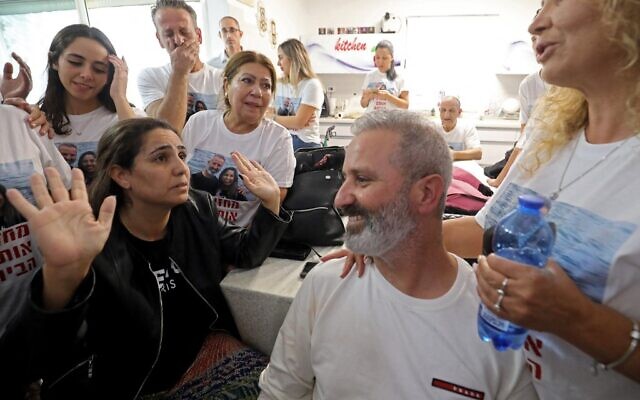 The Israeli couple Mordi and Natalie Oknin, who were detained in Turkey for a week on suspicion of espionage, will be welcomed on their arrival in Modiin on November 18, 2021 after their release. (GIL COHEN-MAGEN / AFP)

The Israeli government specifically thanked Erdogan for his role in setting them free, and Prime Minister Naftali Bennett and President Isaac Herzog both had rare talks with the Turkish leader.

The incident followed other positive signs in Turkish-Israeli relations since Biden’s election. Last December, Erdogan had stated that “Our heart wants us to be able to move our relationship with [Israel] to a better point. “(Although this week he once again accused the Jewish state of” oppressive “policies toward Palestinians.)

Despite the indications of a new Turkish approach, there are still gaps in core interests. The Palestinian terrorist group Hamas is one such issue as it retains offices in Turkey and, say Israeli officials, directs terrorist activity against Israel from Turkish soil.

On Monday, Foreign Minister Yair Lapid demanded that Turkey close Hamas offices in the country after Jerusalem announced the arrests of a sophisticated 50-man Hamas cell in the West Bank, which was routed from Istanbul. 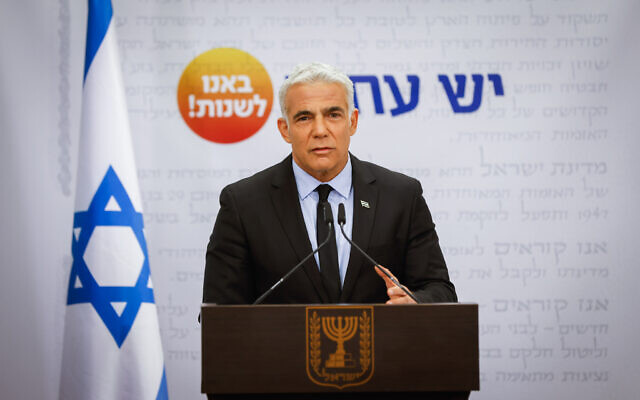 “Hamas’ offices in Istanbul will be shut down. We must prevent these heinous terrorist acts against Israeli citizens,” Lapid said, the day after another Hamas terrorist carried out a deadly terrorist attack in Jerusalem.

Given the cell’s connections to Turkey, Israel reportedly kept announcing the arrests, which were originally planned until 10 days ago, until it had succeeded in securing the release of the windows.

Israel is also concerned about Turkish support for anti-Israel organizations in Jerusalem and the West Bank.

Yet a Middle East with countries that want to uncover their efforts and open dialogue with rivals can open up new diplomatic and economic opportunities for Israel, not least with Turkey. It certainly does not hurt that even the central state supporters of the Muslim Brotherhood in Ankara are willing to walk away from them when it comes to serving their interests.