A new Europe is emerging from the tragedy of Ukraine 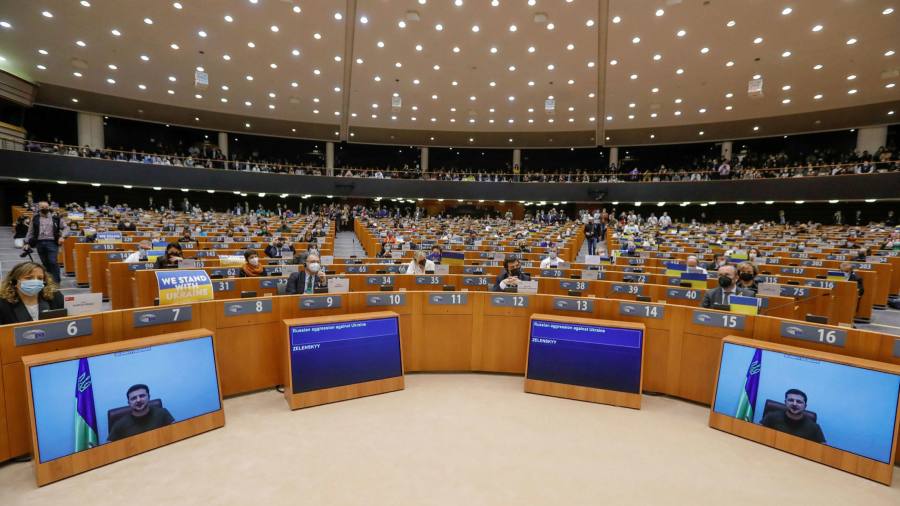 The writer is editorial director and columnist at Le Monde

Who would have thought only a month ago that the EU, an organization so unwieldy that Britain chose to leave, would be seen as the ultimate refuge by nations desperately looking for security?

Less than a week after Russia invaded Ukraine, the Ukrainian government, followed by those of Moldova and Georgia, urgently applied to join both NATO and the EU, seeking a fast-track entry procedure that does not exist. France – a founding member of the EU and notoriously reluctant about enlargement – now agrees that a way must be found, as an Elysée official put it last week, to “anchor in Europe” the countries most exposed to the Russian threat. This means Moldova, Georgia and also the western Balkans, where Moscow’s influence has been growing.

Asked about Kyiv’s request for EU membership a week ago, Ursula von der Leyen spontaneously answered that Ukrainians “belong to us”. German and French officials may think the European Commission president got carried away, but she was reflecting a new sense of responsibility among her fellow Europeans. However this war ends, Europe has already been profoundly transformed.

Jean Monnet, a founding father of the EU, said that Europe “will be forged in crises”. He is being proved right again. It took the Covid pandemic for the EU to make the giant step of financing a huge recovery plan with common debt. Now a war on the continent has moved the EU to decide, over the course of a weekend, to finance weapons deliveries by member states to a country outside the union, thus turning an economic and political organization into a security provider. Chancellor Olaf Scholz, then Germany’s finance minister, called the EU recovery fund, agreed in May 2020, “a Hamiltonian moment” for Europe, in reference to Alexander Hamilton’s mutualisation of American war debt in the late 18th century. We could well experience a second such moment later this week, when the 27 heads of state and government meet at Versailles to discuss new common tools to protect their citizens from the war and future threats.

French president Emmanuel Macron, whose country currently holds the rotating EU presidency, sees this shift as a validation of his crusade for strategic sovereignty. He will no doubt seize the opportunity to push that agenda further, notably in defense and energy. His role as a statesman in this crisis will also increase his chances of being re-elected next month. He now has a powerful ally in Germany, which, courtesy of Vladimir Putin, has accomplished its own, belated, revolution. Overnight, Germany broke with 30 years of complacency towards post-Soviet Russia. It has shelved the Nord Stream 2 pipeline, is sending military equipment to Ukraine and will set up a € 100bn fund for defense investments.

Over the past few days, both Scholz and Macron have spoken of “a new era” for Europe. As taboos fell in Brussels and Berlin, Helsinki and Stockholm also had their watershed moments, with polls indicating majorities in favor of joining NATO. In this new era, former communist countries such as Poland, the Baltic states and Romania – which joined the EU in the 21st century but are now on the front line of the war – will carry more political weight within the EU. In return, these countries, which were previously more focused on NATO, should now turn their attention to strengthening the EU.

Meanwhile, European leaders will also have to ask themselves tough questions. How could they have so badly misread Putin’s intentions? Why did they satisfy themselves with a ceasefire agreement hastily negotiated by then French president Nicolas Sarkozy when Russia invaded Georgia in 2008, then never hold Moscow to account for breaching its terms? Why did they not react more forcefully when Russia annexed Crimea in 2014, intervened in the Donbas and provided the missile that shot down a Malaysia Airlines plane?

Then there are further oversights: Angela Merkel stubbornly resisting pressure from European and US peers to give up Nord Stream 2; Macron assuming he could charm the Russian president into negotiating a new European security order; continental Europeans dismissing US and UK intelligence warnings on Russia’s preparations for the Ukraine invasion as too alarmist.

Was it denial? Was it appeasement, that 20th-century European disease? Was it a false sense of security? Was it sheer disbelief, because we had built the EU precisely to ensure full-scale war would never return to our continent? The soul-searching has not yet started in earnest. But, as a new Europe is emerging from the tragedy of Ukraine, these questions will have to be answered.