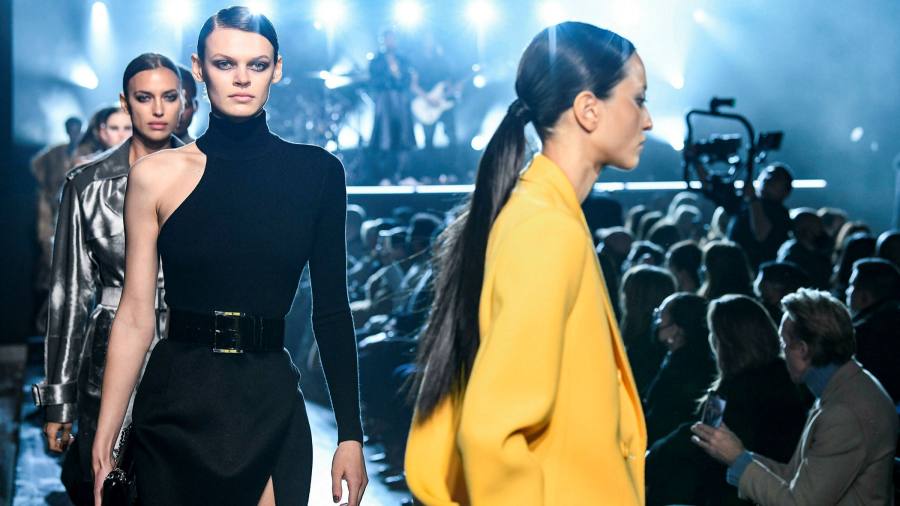 It was a cry echoed by other designers at New York Fashion Week, which drew to a close Wednesday evening after six days of shows at which masks, IDs and proof of double-vaccination (and often a booster jab) were requirements for admission. It is a desire not to return to normal – “I avoid using that word,” said Coach executive creative director Stuart Vevers in a separate preview – but at least to shed the tracksuit bottoms and other slovenly hallmarks of work-from-home dressing and to serve up something a little more daring and streamlined.

So, against the buff-colored brick and polished concrete of the Brant Foundation Art Study Center edging Manhattan’s Alphabet City, Hernandez and Jack McCollough introduced what they dubbed “a new formality” – two-toned strapless dresses with slim knit tops and molded hips from which hung wide skirts of black jersey; polished silk shirts and shirt dresses that buttoned from wrist to collar, worn over glove boots and ballet flats; and angular coats and straight-leg trouser suits that buttoned on the side, hugging the waist.

They were not so much fashion as sensible wardrobe investments – sleek, elegant, versatile clothes for professional women to go to work and then to dinner in, and which, particularly in the case of the molded knit-jersey dresses, looked as comfortable as pajamas. “It’s the idea of ​​dressing up again but doing it in a way that feels contemporary, through knitwear and flat shoes and ease,” said Hernandez.

American designers are simultaneously celebrated and derided for being “commercial” – for showing clothes on the runway that are familiar and therefore “safe”, and that women actually want to buy. That approach has served them well during the pandemic: designers, usually loath to talk numbers backstage, boasted of sales growth of 20 to 55 per cent over 2019, propelled by investment in their core product lines and websites, a boom in domestic luxury spending, and strong demand from department stores that found themselves woefully short on inventory after canceling orders at the start of the pandemic.

Yet a sense of caution lingered. Though many spoke this week of a desire to “take risks”, to “be creative” and “extreme”, for the most part designers did what they’ve long done best, offering practical, on-brand clothes that answer the needs of the moment.

Michael Kors layered large, lush faux fur and blanket-like camel coats of double-faced alpaca over thick ribbed-knit dresses, cashmere leotards, or (for evening) slim, short racerback dresses and snug over-the-knee “stocking” boots in gray or camel suede. “It’s all about glamor and polish but [not needing] to give up the comfort, ”Kors said in a preview before the show.

“It’s about comfort for sure, but also freedom,” echoed designer Tory Burch after her night-time show across from Manhattan’s iconic New Yorker Hotel, on which the Tory Burch name and logo had been beamed in red lights. This confident collection married the best of American sportswear – car coats and high-waisted slacks of the Lauren Bacall variety, hoodies and loafers, and color-blocked dresses in soft, clinging jersey – done with lots of texture and zingy color combinations of mustard and pistachio, and chocolate and neon yellow.

Freedom, too, was on the mind of Gabriela Hearst – namely freedom from gender. She and her team have taken a series of lectures from Stanford art history professor Emanuele Lugli, whose teachings resulted in a merging of shapes and silhouettes across Hearst’s men’s and women’s collections.

The craftsmanship was exquisite: trench coats in black and caramel were topped with storm flaps in fine woven leather, a dress of yellow and orange teardrops was hand-crocheted by Madres y Artesanas in Bolivia, and a pastel drawing by New York artist Ana Martínez Orizondo was beautifully transferred on to an ankle-length cashmere poncho.

Forty-nine per cent was made from recycled or deadstock material, including linen-wool suits in yellow and black made from upcycled fabrics. Thick knits, amazingly soft to the touch, were made of recycled cashmere felt colored with botanical dyes.

Hearst wore one of the jumpers backstage, in gray. “This jumper, made in my country, feels amazing, but it also does something good,” she said, underlining the reason to be or her brand. “More important than how you look, or what you wear, is: what is it doing for others?”

Not every designer was keen to swaddle their models in cashmere and jersey. Celine alum and 2014 LVMH Graduate Prize winner Peter Do sent out a razor-focused, largely monochromatic collection of sharp narrow coats, backless gilets and deconstructed suits softened by fluid, wide-leg trousers and denim.

Other designers turned up the volume. Puff sleeves, exaggerated ruffles and full skirts abounded at Carolina Herrera and Jason Wu, which were enlivened by more youthful, short cocktail dresses.

I just feel like everything I should do now should just be the most extreme, the most creative version of an idea

Joseph Altuzarra acknowledged he used about three times as much fabric as usual to create the wide, floor-skimming pleated silk skirts and military-inspired coats, made grand with their stand-up shearling collars, that were the cornerstones of his excellent, mermaid- inspired autumn / winter line-up.

“I’ve been really approaching the idea of ​​risk very differently post-pandemic, and I just feel like everything I should do now should just be the most extreme, the most creative version of an idea,” he said backstage. The final two dresses were made of heavy golden metal sequins that overlapped like fish scales and sounded like the crashing of waves.

“Comfort”, “freedom”, “ease” – if there was a fourth buzzword of New York Fashion Week, it was certainly “metaverse”. Jonathan Simkhai staged his runway show in the game Second Life; the clothes were surprisingly detailed, if difficult to envision how they might look in the physical world. Maisie Schloss, of the Kanye West-backed label Maisie Wilen, showed her collection via holograms. Dressed in lab coats, glittering dresses and stretchy, laser-cut bodysuits, models were transformed into fantasy creatures with gills and elf ears. Though the format drew attention away from the clothes, it did enhance their otherworldly feel.

Less technologically impressive, but perfectly on point, was Collina Strada’s collection video – a riff on reality TV series The Hills that follows a young Collina Strada intern (played by Tommy Dorfman) as she attempts to navigate the not-entirely-glamorous world of “sustainable fashion”. Censored for using disposable coffee cups and bringing a pastrami sandwich to a vegan team lunch, the video is amusing and paints an inviting portrait of Collina Strada’s cute, colorful and inclusive universe.

“We’re trying to do our part [with climate change] but we can also make fun of ourselves, ”said designer Hillary Taymour. It’s the kind of daring American fashion could use more of.

Bonus season 2022 survey: will you invest, save or spend?