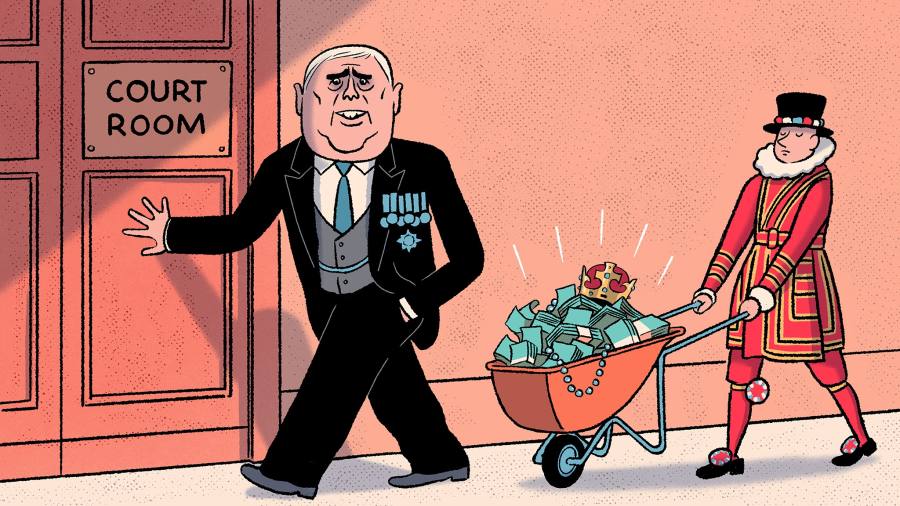 Nota bene: the Duke of York has agreed to a multimillion-dollar, out-of-court settlement with Virginia Giuffre, who was suing him for sexual abuse in connection with the Epstein saga. The deal includes his regret for any impugning of her character, a hefty donation to her fund supporting victims’ rights and a pledge to support the fight against sex trafficking.

In previous eras, accusations of shameful royal behavior were more easily hushed up, allowing royals to do as they pleased without censure or sanction. Even so, the FT has found reports of previous out-of-court settlements from British history.

King Richard III yesterday reached an out-of-court settlement with Elizabeth Woodville, former Queen consort to his brother Edward IV, over her claims that he had murdered three of her sons and her brother as part of his plot to seize the throne of England. The King continues to dispute claims that he ordered the killing of the rightful monarch Edward V and his younger brother Richard, then imprisoned in the Tower of London. King Richard said he could not possibly have been responsible since he had been taking relatives to the Venison Express in Woking at the time of the alleged murder. The King has also denied any liability for the deaths of another of Ms Woodville’s sons and her brother at the hands of the Pontefract Castle executioner.

While the details of the settlement remain private, the King is understood to have paid an undisclosed sum to the Queen dowager and to have agreed to become patron of the Woodville Foundation against regicide, an issue on which the King now feels rather strongly.

The King’s lawyers stressed that this was not an admission of guilt and that the allegations against him were perpetuated by royal propagandist William Shakespeare, the Omid Scobie of his day.

King Henry VIII last night reached an out-of-court settlement with surviving members of the Boleyn family. A statement issued yesterday declared that: “King Henry VIII, most magnificent and merciful, and the Boleyn family have reached a settlement over the claims that he executed his wife and her brother on trumped-up charges of treason and adultery because she could not have a son and he got bored of her. While admitting no liability, the King has agreed to pay an undisclosed sum, a substantial part of which will go to the Boleyn Foundation, which campaigns against the beheading of royal wives. The King has also agreed to join the global struggle against the mistreatment of spouses in whom he has lost interest.

“While the settlement admits no wrongdoing on the King’s part, it does make clear that he never intended to impugn his late wife’s character, loyalty or sexual mores when he accused her of treason and sleeping with her brother. It further accepts that she has suffered both reputational and decapitational damage. He also acknowledges that the marriage was in no way a mistake and, as proof, has decided to hold on to the proceeds of the dissolution of the monasteries. ”

Before the settlement, the King insisted that he had never in fact met Ms Boleyn and could not account for the tapestry of the two of them, which appeared to have been woven in the upstairs chambers of her London residence. He also denied dancing a volta with her at the Mead-Dog nightclub in Richmond.

King Henry said he had come to regret his association with the now-disgraced wife-trafficker Thomas Cromwell who masterminded her fall and told Newsknyghte that he had only maintained their friendship because it gave him access to a fascinating range of businesspeople and future brides. Under the settlement, the King will retain the rights to all future proceeds from the gift shop and café at Hever Castle, as well as copyright of all images, and profits from the Guthrie Pavilion restaurant and café.

There follows a separate news report six years later in which the King renewed his commitment to ending the practice of beheading wives after an out-of-court settlement with the family of Catherine Howard. The settlement includes a commitment to join forces with the Howard Foundation, which campaigns to end the beheading of queens. The King also acknowledged the good work of the Boleyn Foundation, which had become sadly less active since he executed its remaining trustees.

King Edward IV yesterday reached an out-of-court settlement with Majestyk Wines, producers of malmsey wine to the nobility, over allegations that he had overlooked the contamination of a consignment of the spirit. The King has denied all knowledge of allegations that he had his brother drowned in a butt of the aforementioned wine, but off-licenses near the vicinity of the Tower have reported clear notes of the Duke of Clarence in some servings. Lawyers for the King have stressed this is not an admission of liability and that the incident has nothing to do with the monarch’s sudden preference for a nice Chianti.