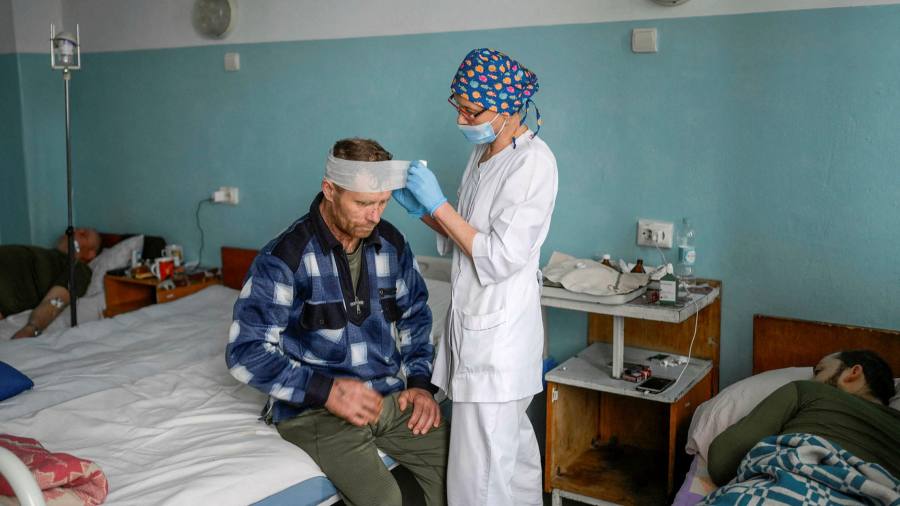 Dan Pasko was getting married in Bali when Russian forces invaded Ukraine. Two weeks later the private equity banker from Kyiv is managing frantic efforts by a group of Harvard University alumni to tackle a critical shortage of life-saving medicines in his war-torn homeland.

“Supply chains have broken down because of the fighting and there is an urgent need to get healthcare supplies to people under siege,” said Pasko, who is liaising with healthcare vendors, logistics companies and Ukraine’s government to source and distribute supplies.

The humanitarian crisis is worsening in the country, where the World Health Organization has verified 26 attacks on medical facilities, including the bombing of a maternity hospital in Mariupol. Cramped conditions in shelters, 1.85mn internally displaced people and the outflow of 2.5mn refugees are raising concerns among health experts that a polio outbreak and a new Covid-19 wave could spread disease beyond its borders.

The WHO declared Europe polio-free in 2002. Huge global health efforts have been focused on eradicating the disease, which is only endemic in Afghanistan and Pakistan. But the virus returned to Ukraine in 2015 and 2016 and the latest outbreak poses a risk to decades of work to contain a disease that can cause paralysis and death.

A multibillion-dollar aid effort is under way involving global agencies such as Unicef, the Red Cross, national governments and businesses. Many Ukrainians at home and abroad are also rallying to their country’s cause, including Pasko – a former Harvard student who co-founded Diligent Capital Partners in 2016 in Kyiv.

“Delivering medicines and equipment via road from the Ukrainian border is now the only option,” he told the Financial Times. But this is challenging because of intense fighting and Russia’s failure to guarantee safe passage through humanitarian corridors, added Pasco, who has relocated some staff to Ukraine’s border with Poland to help the relief efforts.

Ukraine’s health department has asked the Harvard Club of Ukraine – an alumni group including business people with links to the country – and other aid groups to source drugs, which are running out. Medical oxygen and blood are also desperately needed, as well as basic equipment such as syringes and bandages, according to the department’s list seen by the Financial Times.

“We are using our private equity connections with local trucking, logistics and healthcare vendors companies to get supplies in as fast as possible before the blockades get worse,” said Dennis Kogan, a Harvard alumni who runs a San Francisco-based health technology company.

Louise Quy, who leads supply chain operations for Crown Agents, a non-profit international development company that works with Ukraine’s health ministry, said the government had not been stockpiling to prepare for a war.

Since the invasion, she said it has made an “absolutely radical” shift.

“Their plea to us again and again is we need response for trauma, trauma kits, oxygen, PPE,” said Quy, who has just arrived back from Poland’s border with Ukraine.

Crown has been sending trauma kits – packages that include bandages and tourniquets to stop people bleeding out, which UK drugmaker GlaxoSmithKline helped fund.

National health services and drugmakers including GSK, Novartis’ Sandoz, and Bayer have been sending antibiotics to stop sepsis and other diseases caused by bacteria.

The NGO is also hunting for more supplies of protective equipment such as vests with metal shields to keep paramedics safe on bomb sites. Quy said there is a global shortage of the vests as other countries snap them up, fearing the war could spread, and that manufacturers are dependent on China for their raw materials.

Ukraine’s health ministry has set up ways to accept humanitarian aid at the border but it is challenging to get medical supplies to the east of the country, as roads have been jammed with refugees.

“You need a plan A, plan B, and plan C to be agile,” Quy said. “It honestly feels like these two weeks have been a year.”

On top of supplies to treat war injuries, Crown has managed to import drugs including an order of polio vaccines so Ukraine can keep up its infant vaccination campaign in the face of a nascent outbreak.

In October, the health ministry declared a “biological emergency on a regional scale” in response to the outbreak in the Rivne region in the country’s west. The WHO has warned of a “high risk” of national spread because of low immunization coverage and almost two dozen cases have been identified.

“Shortages of vaccine because of corruption and a lot of disinformation about the safety and efficacy of vaccines, and not just for polio but for all preventable childhood illnesses, are [contributory] factors, ”said Judyth Twigg, professor of global health at Virginia Commonwealth University.

Twigg said a lot of the vaccine disinformation originated from Russia, which has been targeting the US and other western nations in a campaign aimed at sowing doubt in the minds of parents over childhood vaccinations.

“Ukraine has been a primary target of that Russian disinformation,” said Twigg, an expert in the Russian and Ukrainian health systems.

Ukraine’s immunization coverage for polio vaccines was 83 per cent in 2020, well below the WHO recommendation of 95 per cent and likely to have fallen further during the pandemic. Just 35 per cent of its population have had two doses of a Covid-19 vaccine – one of the lowest levels in Europe and the reason behind a surge in infections prior to the war breaking out.

The first stage of a WHO-backed “catch up” polio vaccination plan targeting 140,000 children began on Feb 1 but was interrupted when Russian tanks rolled into Ukraine. Unicef ​​is setting up polio vaccination efforts along refugee routes but the huge numbers of displaced people and the destruction of health infrastructure will make it hard to contain the spread of the disease beyond the country’s borders, experts said.

“One you have a war, people crowd together, you get poor sanitation, a lack of clean water, malnutrition and disease,” said Ali Mokdad, professor of global health at the University of Washington in Seattle.

“This war is creating a disaster for the economy and for people’s health but it also raises alarm among scientists about a potential setback to global efforts to eradicate polio.”