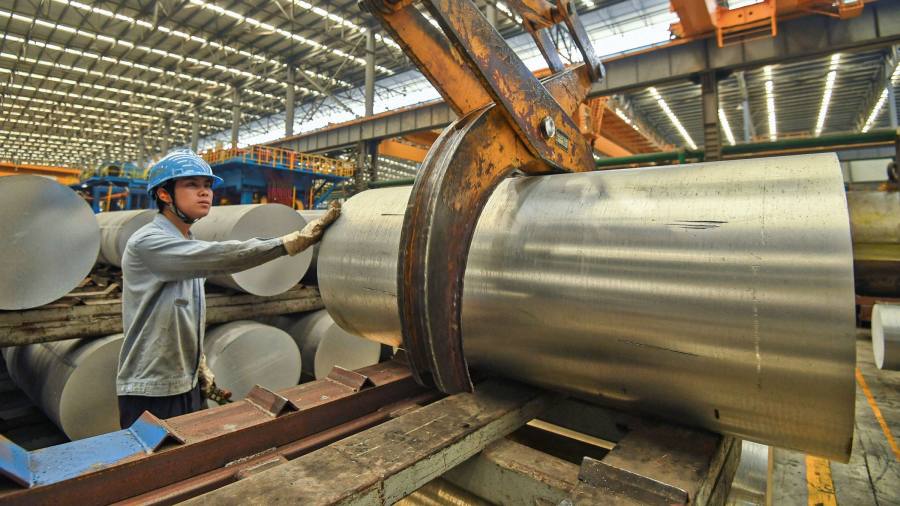 Tight supply, strong demand and escalating tensions in Ukraine have pushed the price of aluminum to its highest level since the global financial crisis, further fueling inflationary pressures.

Aluminum and other important raw materials, including crude oil, natural gas and nickel, have charged out of the blocks this year. Supply has struggled to keep pace with demand as the world emerges from the coronavirus pandemic.

That has left several key industrial commodities trading in backwardation – a market structure that indicates traders and consumers are prepared to pay large premiums for the immediate supply of goods.

Aluminum has risen 13 per cent since the start of the year on the London Metal Exchange and is closing in on its record high of $ 3,380 a tonne set in 2008. Those gains have also boosted shares in Rio Tinto, which hit a six-month high on Tuesday. The Anglo-Australian miner is one of the world’s biggest producers of the metal.

The energy crisis in Europe and power rationing in China, combined with strong demand underpinned by rising sales of EVs, has put the 66m tonne a year aluminum market on a path to “inventory depletion” by 2023 according to Goldman Sachs,

“We believe aluminum markets are facing a melt-up in prices this year,” said Goldman analyst Nicholas Snowdon, citing already low inventory levels – just 1.5m tonnes in official warehouses – and supply shortfalls in China and the rest of the world.

Supply has been at the forefront of traders’ minds again this week. On Monday, Slovak aluminum smelter Slovalco, which is majority owned by Norsk Hydro, announced it would cut production to about 60 per cent due to high energy and carbon prices.

Aluminum is often referred to as solid electricity because of the large amounts of power required to transform its key ingredient, alumina, into refined metal. Smelter capacity losses in Europe now stand at more than 800,000 tonnes, while in China just under 3mn tonnes of output was suspended last year due to power constraints and tough energy control regulations.

More capacity could be sidelined after local authorities in one of China’s most important producing regions imposed strict lockdown measures due to a Covid-19 outbreak.

Guangxi, which borders Vietnam, is China’s third-biggest producer of aluminum, with most of its smelting capacity in Baise City, where travel has been banned.

“Environmental protection policies in Shanxi, Shandong and Henan are also still in place due to Winter Olympics, and with the ongoing tensions on the European continent, it does feel like aluminum will continue to perform strongly in the short-term given the good fundamental story , ”Said traders at Marex Spectron.

The Ukraine crisis has raised fears that the US and its allies could slap sanctions on Russia and some of its important industries and companies. Russia accounts for around 13 per cent of global primary aluminum outside China. Prices would rise sharply if any measures were imposed, given the current low inventory levels.

Analysts believe that such a move is unlikely, although rising tensions over Ukraine could push up gas prices and force more smelter closures.

When Rusal, the biggest aluminum producer outside China, was hit by US sanctions in 2018 and blacklisted by financial institutions, it threw metal markets into chaos and caused significant supply chain disruptions.

This was particularly true in Europe where the halting of shipments to Rusal’s Aughinish alumina refinery left smelters producing metal for carmakers such as BMW as well as Airbus, the manufacturer of the A380 superjumbo jet, scrambling for supplies.

“Given the significant costs this generated for developed market downstream industries and subsequent lobbying for a reversal in policy, it would appear improbable that a similar approach would be followed by western governments in the current episode,” said Snowdon.


Demolishing our past is vandalism in the name of regeneration