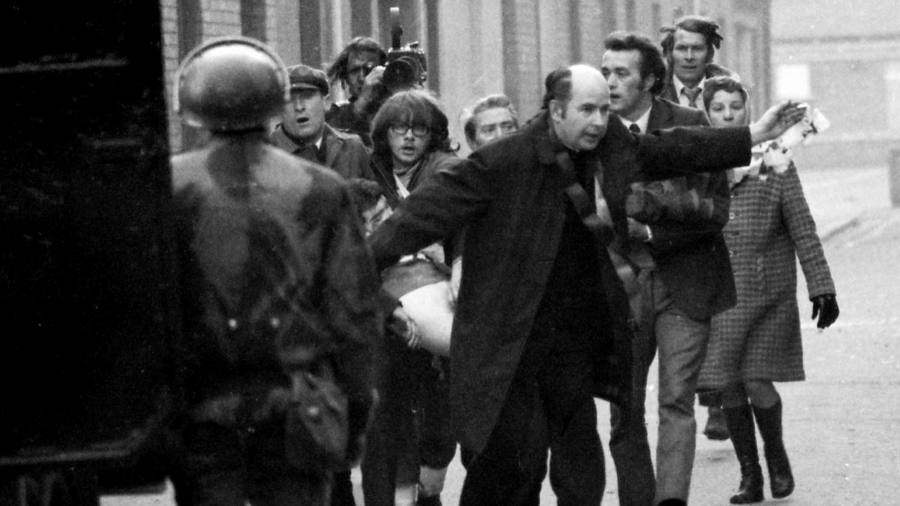 The shooting lasted less than 10 minutes. But the events of Bloody Sunday, which took place 50 years ago this weekend, were to go down in history as one of the worst atrocities of Northern Ireland’s three decades-long Troubles – and would change the entire course of the conflict.

When the British Parachute Regiment took to the streets of Londonderry, also known as Derry, on January 30 1972, the red beret-wearing force was supposed to be on hand in case a civil rights march against a new policy of arresting suspected nationalists and interning them without trial turned ugly.

Instead, the soldiers in the British-ruled region opened fire indiscriminately on the crowd, shooting more than 100 rounds and killing 13 men and teenagers; a 14th victim later died as a result of his injuries.

Nearly a quarter of a century since the 1998 Good Friday Agreement, which ended the conflict between republicans fighting for a united Ireland and loyalists battling to keep Northern Ireland British, the anniversary is particularly poignant.

It comes as London presses ahead with a planned amnesty for all Troubles-era crimes, shielding security forces as well as paramilitaries on either side from prosecution. The move has united unionists, nationalists and politicians in opposition, similar to the opprobrium that greeted the flying of Parachute Regiment flags in some parts of Derry this week.

However, the relatives of Bloody Sunday victims are still fighting for prosecutions. Many of their family members were shot in the back as they fled. One man was finished off by a soldier while already on the ground. Another was shot in the head after going to the aid of a dying man, saying: “If I take a white hanky and go out, they will not shoot me.”

“Truthfully, I believed they enjoyed every second of that day,” said John Kelly, who helped his 17-year-old brother Michael into an ambulance after he had been fatally shot. “They also knew they would be protected.”

The atrocity was whitewashed in the first official inquiry in April 1972, which concluded that some “firing bordered on the reckless” but that paratroopers “had been fired upon first”. It took a further 38 years for a new inquiry to exonerate the victims and for then prime minister David Cameron to tell parliament in 2010 the shootings “should never, ever have happened. . . I am deeply sorry ”.

“There are so many, many people [in Northern Ireland] who can not just draw a line and forget, ”said Maeve McLaughlin, manager of the Bloody Sunday Trust, which was established on the 25th anniversary of the atrocity to support relatives in their quest for justice.

She called the amnesty plans “shameful”. “For so many families, this is about putting the truth out there, allowing the truth to be told,” she added.

Molly Carson, project manager at Families Acting for Innocent Relatives, a group that represents victims of atrocities carried out by the nationalist paramilitary Irish Republican Army, said some relatives and survivors believed official British letters issued to suspected IRA members after the Good Friday Agreement telling them they would not be prosecuted meant that “in a way the government already offered those IRA members an amnesty”.

She added: “FAIR victims do not wish to see the perpetrators of heinous crimes seen on an equal parallel as police officers or soldiers who were trying to retain peace at a time of rioting and mayhem within Northern Ireland.”

Conservative MP Sir Mike Penning, who served in Northern Ireland, appealed to the government to speed up its implementation of the amnesty, which the government describes as a “statute of limitations”. “We must not have any delay. . . getting to a conclusion on this so that veterans. . . can live their lives in peace, rather than in fear of being dragged before the courts, ”he told parliament this week.

Brandon Lewis, secretary of state for Northern Ireland, insists the government’s amnesty plans are intended to “move things forward” and ensure that people should have access to the truth. The government hopes to introduce legislation before the region’s elections in May.

“People should not be waiting decades for information,” he told Westminster. The government argues that there is a diminishing prospect of successful prosecutions as the years pass. “[We] have to be honest with people about what is achievable and the reality of what we can do, ”Lewis added.

However, Colin Harvey, a professor of human rights law at Queen’s University Belfast, blasted the government’s approach to amnesty as “extremely reckless and irresponsible” and said it was “essential that we never forget where this society has come from and the legacy of the conflict and what happened here ”.

Kelly said he could still see his younger brother’s face as he sought help for him, adding: “I remember every second”. He fears the government’s plans are “about protecting soldiers, it’s as simple as that”.

The march on Bloody Sunday in 1972 came at the height of the civil rights movement in Northern Ireland, in a city whose majority Catholic population was crammed into inadequate housing and mostly denied voting rights because only ratepayers were allowed ballots.

In August 1969, British soldiers had been deployed to Northern Ireland following three days of rioting in Derry, dubbed the Battle of the Bogside. In August 1971, as soldiers sought to smash the IRA by rounding up suspected nationalists and jailing them without trial, the Parachute Regiment shot dead nine people in Ballymurphy in Belfast.

Many saw that incident as a trigger for a tragic chain of events that strengthened support for and recruitment in the IRA. Like Bloody Sunday, Ballymurphy was initially passed off by the British army as an IRA gun battle and the victims were not declared “all entirely innocent of any wrongdoing” until May last year.

None of the soldiers involved in either incident have been prosecuted and last July Northern Irish authorities abandoned the prosecution of the only British soldier charged over the Bloody Sunday killings, believing it would not be possible to secure a conviction.

Some believe that too much time has passed for perpetrators of Troubles-era atrocities – whether security forces, the IRA or loyalist paramilitary groups – to be put behind bars.

“We need to bring this to an end, somehow,” said one official in Derry who asked not to be named. “Very few people want to see any more people go to prison. There’s nothing to be gained. ” He added that if convictions could be secured “that’s a punishment in itself”.