‘Another Stalingrad’: assault on Kharkiv shatters ties that once bound two nations 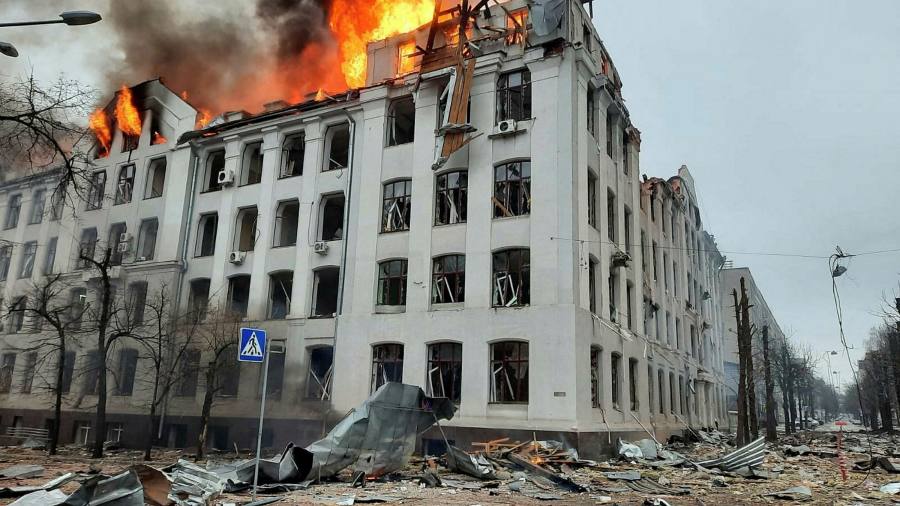 Nadezhda Gurkalenko used to look at Russia with a mixture of envy and admiration. Now, she says: “I realize I was an idiot.”

She is a native of Kharkiv, the city that has borne the brunt of Russia’s invasion of Ukraine, enduring a relentless artillery barrage that has laid waste to residential areas and left dozens dead and injured.

The bombing has wrecked local government buildings, schools and a maternity hospital. But it has also destroyed something more intangible – the respect and even affection that millions of people in eastern Ukraine used to feel for Russia.

That sympathy was deeply embedded in the region’s culture. Kharkiv is just 50km from Russia. Many people there speak Russian, have close relatives across the border and identify more closely with Russian than with Ukrainian culture. For them, the past week has brought a terrible reckoning.

“I’m Russian, I loved and was proud of Russia and everything Russian,” said Larisa Frantsuzova, a poet and writer from Kharkiv, in a message sent from the city. Now, a week into the invasion, she added: “I have no love left.”

Russia’s invasion was driven in part by the ideology of “Russky Mir” (“Russian World”), the idea that Moscow should wield influence over which Russian is spoken – including in Ukraine. To many, including Vladimir Putin, who has said that Ukrainians and Russians are essentially “one people”, Ukraine is an inalienable part of this world.

The credo underpinned Russia’s annexation of Crimea in 2014 and its fomenting of a separatist rebellion in the eastern region of Donbas that same year. It is an ideology that used to enjoy some support in parts of eastern Ukraine. Not any longer.

“Even the most dyed-in-the-wool Ukraino-phobes now support Kyiv,” said Alexei, a surgeon in Kharkiv, contacted by phone. “How can it be otherwise when the Russians have turned this city into another Stalingrad?”

Across Ukraine, Russian soldiers who expected to be greeted as liberators have had a rude awakening. The reception has been hostile even where Russian speakers dominate, such as the south-east: videos from the southern city of Melitopol published on social media on Wednesday showed crowds of local residents holding Ukrainian flags and confronting Russian troops, shouting “Go home”, “Putin is a dickhead”, and “Melitopol is Ukrainian”.

Even politicians from the old “Party of the Regions”, a pro-Russian outfit that used to dominate politics in eastern Ukraine, are changing their tune. Among them is Mikhail Dobkin, a former mayor of Kharkiv who was investigated in 2014 on suspicion of backing the Donbas separatists. “Much of what I believed in collapsed overnight. . . just burned out, ”he wrote on Facebook after the invasion began. “May this war be damned.”

“How can anyone in this country support the idea of ​​the ‘Russian World’ after they started bombing our cities,” asked Oleksiy Plotnikov, a former Party of the Regions MP. “The vaccination Ukraine just got from the Russian World is even stronger than Pfizer and Moderna.”

Gurkalenko, a manicurist, said she long eyed Russia with envy: Putin was a “strong and sensitive” leader who had been in power for more than 20 years while Ukraine was rocked by near-constant government crises. “They had stability, we had none,” she added.

Now, she saw things entirely differently. “I am rethinking all of my values,” she said, speaking by phone from a bomb shelter in Kharkiv.

The shift in her view has alienated her from her mother, who lives in Moscow and receives her news about the war from Russia’s state-run TV channels.

“She says – just be patient and wait it out, it’s just a little ‘special operation’,” Gurkalenko said. “She said Ukraine had let in fighters from the west who were going to attack Russia. She has no idea what’s going on here. ”

Ties of friendship have also broken. Olga Sitkovska, 34, another resident of Kharkiv who has now fled the city, exchanged angry texts this week with a Russian friend she met on holiday in Turkey in 2016. “She started to send me propaganda videos, saying: ‘You see, in Ukraine Russians are suffering and Putin must come to their aid ‘, ”said Sitkovska, a local TV presenter.

She said she did not want to cut off contact with her friend, but added: “I feel this lack of understanding, this lack of believing. It makes me sad and angry. ”

Cross-border traffic between Kharkiv and nearby Russian cities used to be brisk, especially at weekends. It diminished after 2014, but family and friendship ties were never entirely cut. That will change now.

Frantsuzova said she was heartbroken. “Our grandfathers, Russians and Ukrainians, who fought shoulder to shoulder in the second world war. . . thank God they did not live to see this day, ”she added.