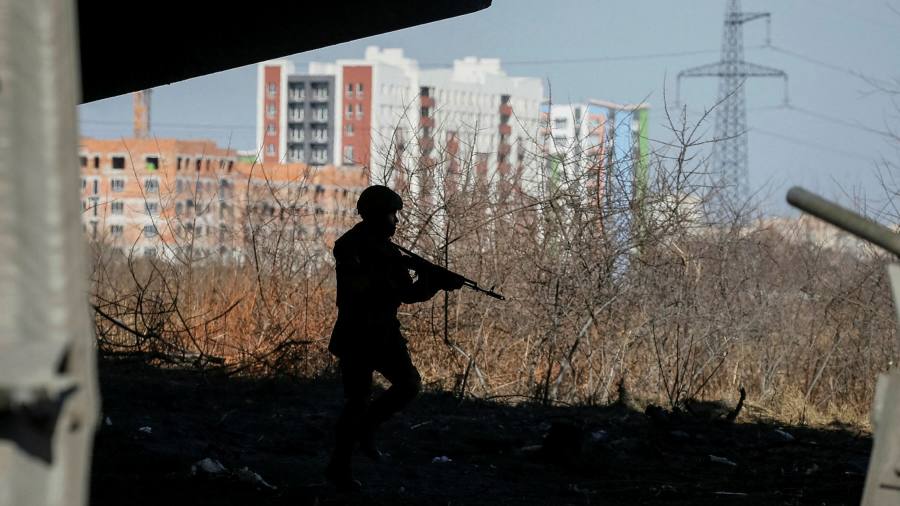 He was flying high as he described how he and his unit had repelled a Russian tank thrust into Irpin, 25 minutes’ drive from the center of Kyiv.

In the distance, columns of black smoke billowed from the neighboring town of Bucha to the relentless soundtrack of “boof, boof, boof” as invading Russian forces and Ukrainian defenders fought an artillery duel for the gates of the capital.

For five days the Russians had not advanced, said 34-year-old Artem, speaking underneath the remaining elevated section of the Irpin bridge on Saturday. It was blown up by Ukrainian forces soon after the Russian invasion began on February 24 to slow the advance of Vladimir Putin’s troops, if or when they reached here.

The battles of Bucha and Irpin are key to the defense of Kyiv and with it the country’s battle for survival. If the Russians break out of Bucha, already captured, and take Irpin, they will stand at the outskirts of the capital. From the destroyed bridge, the first high-rises of Kyiv are just a five-minute drive through forest.

But, with every passing day, it is clear that the Russians will have to fight every inch of the way. On the Irpin-Kyiv road, by billboards advertising the price of new flats, soldiers have been digging positions and artillery pieces are hidden from prying drones and satellites under forest pines.

For days thousands of refugees have picked their way across the remains of the Irpin bridge as they flee fierce fighting. On Saturday the flow had slowed to a trickle. In the opposite direction came a steady stream of soldiers, police in black uniforms and volunteers carrying boxes of food and supplies. Under the span of the bridge, a man sewed a camouflage covering for a mobile anti-aircraft gun.

The road into Irpin is jammed by scores of abandoned cars. Several vehicles lie burnt and gnarled, hit by shells. The petrol flaps on the others have been left open, their fuel siphoned out.

Vans driven by volunteers weave their way through before embarking on the Irpin run, speeding through the deserted town to collect residents from shelters or new arrivals from Bucha. Between Irpin and Bucha, burnt-out buildings line a debris-strewn avenue.

Until the Russian invasion began, Irpin had been a flourishing town. In the past few years smart blocks of flats have been built for middle-class residents of Kyiv. Now the windows of an elegant office block have been shattered. A few hundred meters away a dead man lay on the pavement. A woman walked her dog as if it was just another day.

Further into town is a church center where refugees congregate to be picked up by the volunteer drivers. Food and drink have been laid out on a table but with few takers. Most of Irpin’s residents have already fled.

But not everyone wants to leave. In the lobby cradling a coffee sat Faina Avdeeva, aged 58, a construction engineer until the day the invasion started. Her son had failed to persuade his stubborn mother to leave with him – even though she has no electricity, running water or heat. “I am staying in my home,” she said smiling, “because I have got five cats. Two were mine before and three were left with me by people who have left. ” And as an afterthought she added: “Oh yes, I am feeding the strays in the yard too. I am the only one left in my block. ”

Holdout civilians are the bane of Ukrainian forces, though they are not forcing them to leave. Ihor Zadorozhnyi, a 30-year-old professional soldier, prepared for a mission with his comrades nearby. Ukrainian troops said that the Russians had taken about a fifth of Irpin. They were waiting for as many civilians as possible to flee before beginning a counter-offensive to drive them out.

“Now is not fighting time,” said Zadorozhnyi. But Ukrainian forces are preparing, gathering information from remaining locals about the location of Russian tanks and troops.

On Sunday, Ukrainian authorities closed Irpin to journalists after an American photographer was shot dead in the town.

Determination to fight the Russians is high in part because Irpin became home to many Ukrainians who fled the separatist war in Donbas, in the east of the country, orchestrated by Moscow in 2014. Zadorozhnyi, like many in Ukraine’s forces, has fought in the Donbas war.

Two hundred meters before the final Ukrainian checkpoint, smoke still rose lazily from the pastel blue and white Soviet classical temple-style House of Culture, which was hit by Russian shells on Friday night. On the other side of the road is a Ukrainian tank, but “it has broken down” said Casper, a local commander who gave his call-sign rather than real name.

Behind the tank stood the administration building of a factory hit in the same bombardment. Chunks of masonry lay scattered in front of it. In a Soviet-era shelter underneath the building, soldiers and holdout civilians shared cooking facilities. The soldiers slept on one side of the shelter while the few elderly people and one family with a five-year-old girl slept on the other. Keeping a beady eye over them are four caged cockatoos left by a fleeing family. “I live in Irpin!” said Svitlana Kravchuk, age 52, breaking into English when asked why she had not she left.

Nearby was the forward Ukrainian troop position. Close by that, two dead Russian soldiers lay where they fell. The Russian lines were just 700m away down a wide street. It was a short sprint to a wrecked armored personnel carrier that marked the limit of Ukrainian control. “Zigzag! Zigzag! ” yelled Casper.

Just beside it two Alsatians sniffed the charred remains of another Russian soldier – a jolting, revolting reminder of Ukraine’s unfolding horror.

Back across town there was a scene from the Middle Ages. In a supermarket car park three men were bound to signposts with clingfilm. Their trousers and underpants had been pulled down to their ankles, potatoes shoved in their mouths.

Standing guard was black-uniformed Ira, aged 33. She said they were a gang of looters caught stealing from empty flats in Irpin. They were also believed to have robbed refugees.

“Oh, has your potato fallen out?” said a soldier with a voice of mock concern. In a second, he rammed the potato back into the prisoner’s mouth and then patted him on the cheek. Photographers swarmed around the spectacle. In the distance came the “swoosh, swoosh, swoosh” sound of Grad missiles being fired.

It was bitterly cold. Ira pulled up her balaclava. She had been in Indonesia, working remotely, when the war began, “because I do not like to spend the winter in Ukraine”. In previous years she had wintered in California. She imported cars and owned a car-repair bodyshop. She had come back, she reflected philosophically, “because if I do not fight, who will?”