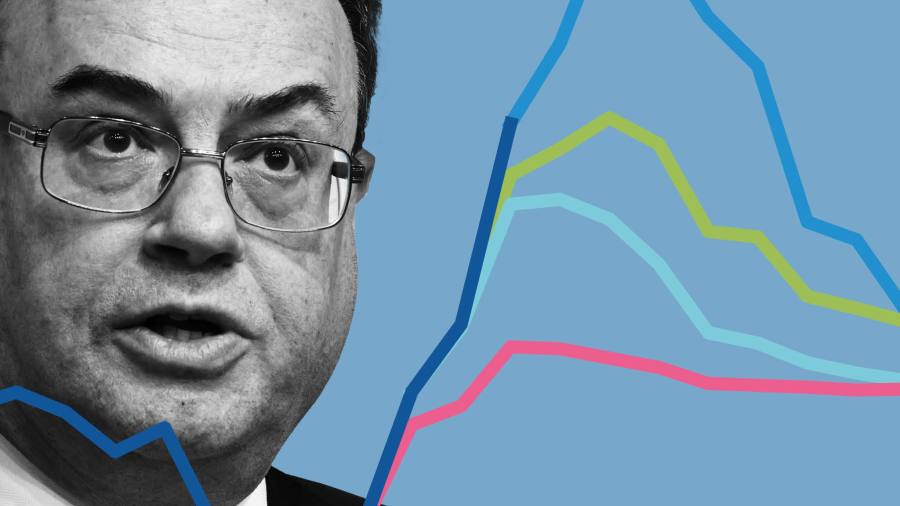 Thursday at noon was the moment the Bank of England got really tough with the British public.

To return inflation from an expected peak of 7.25 per cent in April to the central bank’s 2 per cent target, the BoE announced action that will hurt most households at the worst possible moment.

The BoE monetary policy committee’s members voted five to four in favor of raising official interest rates from 0.25 per cent to 0.5 per cent, with the minority wanting a larger half-point increase.

This came shortly after regulator Ofgem said the energy price cap, affecting about 22mn households, would rise 54 per cent to an average of £ 1,971 a year from April.

The move laid bare how Britons are contending with a cost of living crisis, in which surging energy prices propelled consumer price inflation to a 30-year high of 5.4 per cent in December.

The BoE also announced it had begun quantitative tightening of the £ 895bn stock of assets it has bought to stimulate the economy since the financial crisis. Initially the BoE will no longer reinvest the proceeds from government bonds it holds when they mature, reducing the total by £ 70bn over the coming two years.

Andrew Bailey, BoE governor, was clear that this was not the end of the tough love for the British public, saying he felt he had to give a “hard message”.

“We are facing a squeeze on real incomes. . . and it is necessary for us to raise interest rates because if we do not do that, the effects would be even worse, ”said Bailey.

He added there would probably be more “modest” rises in interest rates in the coming months, because the MPC’s forecasts showed inflation staying above 2 per cent throughout the next three years if it left them at 0.5 per cent.

Since November, the committee has been spooked by just how much it failed to anticipate the surge in inflation and the spread of price growth pressures beyond energy.

Most troubling for the BoE was information from its regional agents showing companies expect pay settlements to rise to 4.8 per cent in 2022 amid a hot labor market, while a central bank survey found businesses saying they would raise prices by a similar amount.

Financial markets’ expectations of inflation in the medium term are similarly high.

Tighter monetary policy to address this concern about high inflation would have multiple effects, according to BoE officials.

Bailey said part of the way higher interest rates would work was to make borrowing more expensive and life harder for households, but he also wanted to send a message to companies as well as consumers that they should expect inflation to fall back to 2 per cent.

If businesses did not, and kept raising prices by around 5 per cent or more, the thinly veiled warning from Bailey was that he would play even rougher to get inflation under control.

The effects, he stressed, would not be pleasant. Inflation would be higher, economic growth lower, incomes falling and unemployment rising.

In its forecasts, the MPC showed the UK economy would grow 1.8 per cent in the coming year before slowing to an anemic average 1 per cent for the following two years, with the unemployment rate rising from a low of 3.8 per cent to 5 per cent .

These forecasts were considerably worse than those in November, reflecting the 2 per cent cut the BoE expects in real household disposable incomes during 2022 as pay and benefits fail to keep pace with price growth.

Economists and financial market traders almost universally took the view that the BoE was taking a very hawkish stance, especially following a knife-edge MPC vote that almost involved interest rates rising half a percentage point. That has not happened since the central bank gained operational independence to set monetary policy in 1997.

Allan Monks, economist at JPMorgan, said there were “some significant hawkish surprises in [the BoE’s] communications ”such as the hint that the next rate rise might be as early as March.

Steffan Ball, economist at Goldman Sachs, said the BoE language was consistent with another two increases in rates over the next three months, taking them to 1 per cent by May.

But Bailey was keen to stress his message was not that the BoE had turned into an inflation-fighting warrior, seeking to increase the cost of borrowing whatever happened.

He repeatedly pointed to the MPC’s forecasts showing inflation would fall below the central bank’s 2 per cent target in three years’ time if interest rates followed market expectations and rose to 1.4 per cent.

“Please do not get carried away,” he urged journalists looking at the forecasts. “There is a downside to this forecast that would end up with less action being taken than some observers think.”

But there was a double-edged sword lurking in the governor’s comments. If energy prices were to fall, giving households some respite, the implicit warning was this was likely to create too much growth and an even hotter labor market, so the BoE might still have to raise rates in these circumstances.

The BoE has not had to play bad cop for the past 15 years of low interest rates.

The central bank did not like the message it sent on Thursday, but Bailey was clear that the UK would be even worse off if the BoE did not clamp down on what is now a serious inflation problem that has occurred on his watch.

IMF defends deal with Argentina to restructure $44.5bn of debt