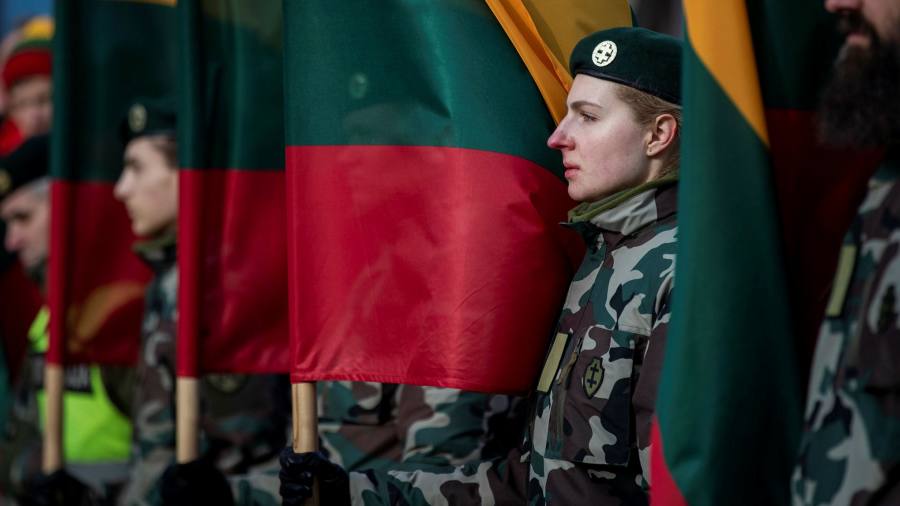 As the world waits to see how the Russian threat to Ukraine plays out, the three Baltic states are focused on what Moscow is up to in neighboring Belarus and what it means for their security.

Some 30,000 Russian troops have been on the ground in Belarus this month ostensibly for a military exercise. But ministers and security officials in the Baltics believe some will remain when the maneuvers end on Sunday, leaving Russian troops on their doorstep.

While an imminent attack on the Baltics seems unlikely, the three countries worry about Russia’s ability to cut them off from the rest of Europe via the Suwalki gap, the narrow 65km Polish-Lithuanian border, seen as one of NATO’s most vulnerable points. To the west lies the heavily armedised Russian exclave of Kaliningrad; to the east is Belarus.

“We are becoming West Berlin, as a smaller country surrounded by an enemy that has much more military might,” said Marius Laurinavicius, an independent security consultant in Lithuania.

Illegally annexed by Moscow after the second world war, the Baltic states are the only ex-Soviet countries to have joined the EU and NATO, providing an example to the likes of Ukraine and provocation to Russia through their fierce defense of freedom.

Kusti Salm, permanent secretary at Estonia’s ministry of defense, said the war games in Belarus meant Russia had 10 times the number of forces in the region than NATO has on its eastern flank in the Baltics and Poland.

He said Russia’s show of military strength and readiness was “a dramatic change that has not happened in decades”. If the situation remained, he said, “there needs to be a dramatic change in force posture in NATO too.”

Belarus was seen by the west as a satellite state, even before next week’s referendum in the country that could end its formal neutrality and agree to host Russian nuclear weapons.

“With every year, with every exercise, we see the integration getting closer. There is a military imbalance in the region. We will never match the military strength the Russians have. But we can deter, ”said Margiris Abukevicius, Lithuania’s deputy defense minister.

“The Suwalki corridor is where the many weaknesses in NATO’s strategy and force posture converge,” said a 2018 study co-authored by Ben Hodges, the former US commanding general in Europe.

A senior Baltic security official said that during last year’s Zapad military exercises by Russia and Belarus, troops practiced closing the Suwalki gap and a mock invasion of Lithuania. “That was definitely an alarm,” the official added, which showed Russia’s superior capability in the region.

“If you seize control of [the Suwalki gap] you will make efforts to reinforce the Baltics much more of a challenge. It is possible with sea and air, but all the reinforcements are via land currently. It’s a complex issue that would very seriously affect the ability of allies in a crisis situation, ”said Abukevicius.

Alar Karis, Estonia’s president, spoke for many in the region when he said he did not think there was currently “a direct threat to Estonia” but he said Russia was “an opportunist, ready to challenge Europe and NATO”. The senior Baltic official said “the most dangerous scenario for us” is that Russia makes a very limited incursion, possibly using separatists, something that NATO could struggle to respond to quickly.

Nato allies have been rushing to reassure the Baltics. The UK, Germany, Norway, and Denmark have all sent extra troops to the region this month as part of three multinational battle groups of about 1,000 each in Estonia, Latvia, and Lithuania. The US also has a battalion on rotation in Lithuania, and has sent reinforcements to its base in Poland. But the Baltics would like more.

Mikk Marran, director-general of Estonia’s foreign intelligence service, said some Russian troops were likely to remain in Belarus after the exercises. “That would reduce preparation time for an attack against the Baltics. . . If Russia is successful in Ukraine, it would encourage it to increase pressure on the Baltics in the coming years, ”he added.

“We need to use some tactics used by western countries in the cold war,” said Laurinavicius, the Lithuanian security consultant, including increased defense spending by the Baltics, a permanent US troop presence, and NATO reinforcements in the region.

Estonia, Latvia and Lithuania are all increasing their defense spending to 2.5 per cent of gross domestic product compared to the NATO target of 2 per cent.

NATO is gradually increasing troop numbers in eastern Europe, but is still a long way from matching Russia’s strength in its western regions. The senior Baltic official said: “Having a cold war-style permanently established force, it’s a fantasy. What we have now can be improved so reinforcement is the name of the game, allied boots on the ground. Credible defense is not achieved by x number of troops in Estonia or Latvia or Lithuania but the quality of the equipment. ”

For now, Baltic officials are watching Belarus as anxiously as Ukraine. Gabrielius Landsbergis, Lithuania’s foreign minister, said: “Everything is on the table – hybrid provocations, Anschluss of Belarus, leaving troops permanently there, creating these tension points near the Suwalki corridor. It is very difficult to predict the outcome and we need to be prepared for many possible outcomes and have answers to them. ”