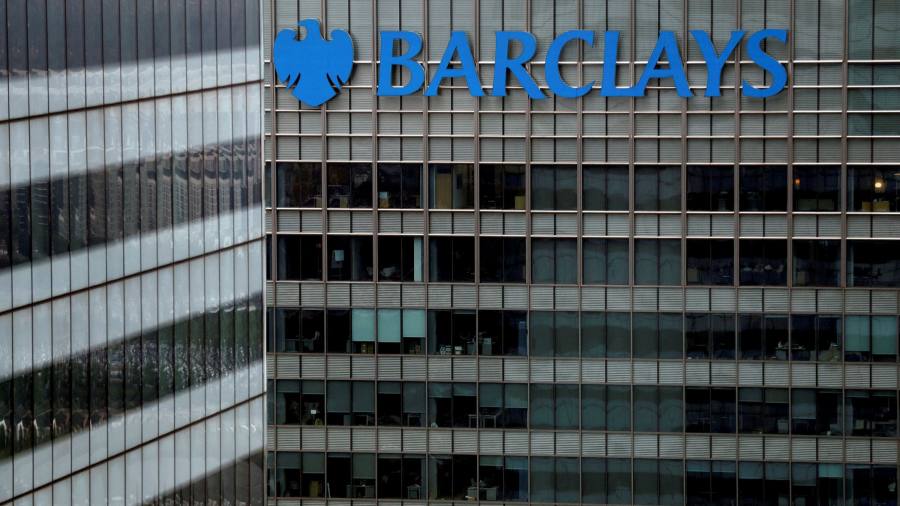 Barclays’ profit more than quadrupled in the fourth quarter as a dealmaking boom boosted its investment bank and it released more reserves that it had set aside to cover potential loan-losses linked to Covid-19.

As the economic outlook continues to improve, the bank released £ 31mn of loan-loss reserves set aside to cover defaults caused by the coronavirus pandemic, compared with adding £ 492mn in the same period in 2020. Analysts had expected Barclays to take another £ 157mn in loan provisions.

The bank said it would pay a total dividend of 6 pence a share for 2021 and buy back another £ 1bn of stock in addition to the £ 500mn already announced. Its shares were up 3.7 per cent in early London trading.

Barclays also increased its bonus pool for 2021 by almost a quarter to £ 1.9bn.

The results are the first under chief executive CS Venkatakrishnan, the lender’s former chief risk officer and trading head. Venkatakrishnan replaced Jes Staley in November after Staley resigned amid an investigation by UK regulators into his past relationship with convicted sex offender, Jeffrey Epstein.

The Financial Times has reported that when Staley worked at JPMorgan Chase several years ago he exchanged 1,200 emails with Epstein over a four-year period, with content that included unexplained terms such as “snow white”.

The cache is at the center of regulators’ concerns that Staley mischaracterized how close his relationship was with the deceased financier. Staley is contesting the preliminary conclusions.

Barclays ‘board separately announced that it had frozen Staley’s unvested share awards worth millions of pounds until the outcome of the regulators’ probe.

Venkatakrishnan, who worked with Staley at JPMorgan, has vowed to maintain the core of his predecessor’s strategy, which is based on building up the investment bank into a viable competitor to Wall Street. He said he had recused himself from any board discussions or decisions about Staley because of their longstanding relationship.

“2021 is the year in which Barclays demonstrated the results of the strategy we set out in 2016,” the chief executive said, pointing out that its consumer, payments and investment banking divisions exceeded targets for profitability.

“We recognize that the economic environment is more than usually uncertain, with rising inflation rates and tighter monetary policy, while many parts of society continue to recover from the severe social and economic effects of the Covid-19 pandemic,” he added.

In 2020 and for much of 2021, revenues surged at the investment bank as turbulent markets during the peak of the pandemic were followed by a record dealmaking boom that lifted the advisory unit. However, this now shows signs of fading.

Pre-tax profits at the unit jumped 32 per cent to £ 1bn in the quarter, exceeding analysts estimates for £ 753mn. However, this was largely due to lower costs, while revenue was flat at £ 2.6bn, missing analysts’ estimates.

Fees from capital markets and M&A rose 27 per cent to £ 956mn, comparable to the big gains posted by Wall Street rivals earlier in the month.

This partially offset a steep drop in revenue from trading, which fell 23 per cent to £ 1bn as market volatility returned to normal from the chaos of late-2020. Analysts at Citigroup pointed out that both fixed income and equity trading significantly underperformed US rivals.

Barclays also said that its chief financial officer Tushar Morzaria would retire in April and be replaced by his deputy, Anna Cross.