Beijing will help “formulate and implement” epidemic-control policies to contain Hong Kong’s largest coronavirus outbreak yet, increasing the chances that harsh lockdown measures routinely enforced on the mainland could soon be extended to the increasingly isolated financial center.

China’s State Council office responsible for Hong Kong affairs said that officials from the territory would travel “in coming days” to southern Guangdong province for meetings with central and regional health officials. The office added that it was “highly concerned” about the Hong Kong outbreak, which has been stoked by the fast-spreading Omicron variant.

Chinese policy advisers and state media have publicly criticized the Hong Kong government, led by chief executive Carrie Lam, over the past week for failing to hold the line on Beijing’s “zero covid” policy.

Similar outbreaks in mainland cities with much larger populations than Hong Kong’s have been successfully contained by harsh lockdowns that in some cases lasted for weeks.

“The Hong Kong government has made mistakes in its decision-making,” Tian Feilong, a policy adviser to the Chinese government on Hong Kong, told the Financial Times. Tian, ​​a director at the Beijing-based Chinese Association of Hong Kong and Macau Studies think-tank, said senior civil servants in the territory had been too influenced by “western” approaches that emphasized “living with Covid”.

Regina Ip, a member of the territory’s legislature and Lam’s de facto cabinet, said: “The government is torn between adhering to western norms of respecting individual liberties and choices and adopting the more aggressive mainland model.” 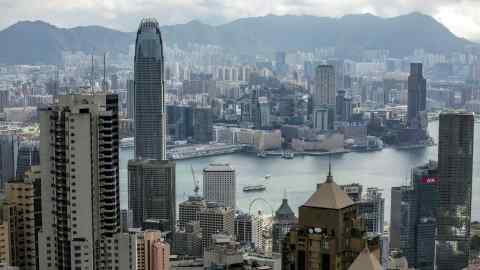 Lam’s administration has rolled out a series of increasingly stringent measures to combat the outbreak, including forbidding people from gathering publicly in groups larger than two. Hong Kong logged more than 1,325 new infections on Friday.

“If the new social distancing measures do not work within two weeks. . . a period of lockdown should be considered, ”said David Hui, infectious disease professor at the University of Hong Kong who also heads one of the government’s Covid advisory committees.

A senior Hong Kong government adviser said the territory would struggle to find the human resources needed to achieve a lockdown similar to those recently enforced in Xian, Tianjin and other large Chinese cities. “How are we going to do that?” the adviser asked. “We do not have enough policemen.”

The new measures, as well as shortages and soaring prices for vegetables, have heightened the city’s sense of isolation. Hong Kong has been cut off from both China and the outside world for almost two years as a result of strict quarantine measures that have brought inbound and outbound travel to an almost complete halt.

This week, Fitch Ratings slashed its 2022 gross domestic product growth forecast for the territory to 1.5 per cent from 3.0 per cent, citing the social distancing measures.

Hong Kong lawmakers, almost all of whom are pro-Beijing figures after opposition candidates were barred from recent elections, have also urged Lam to accept Chinese government assistance in expanding a medical facility in the city.