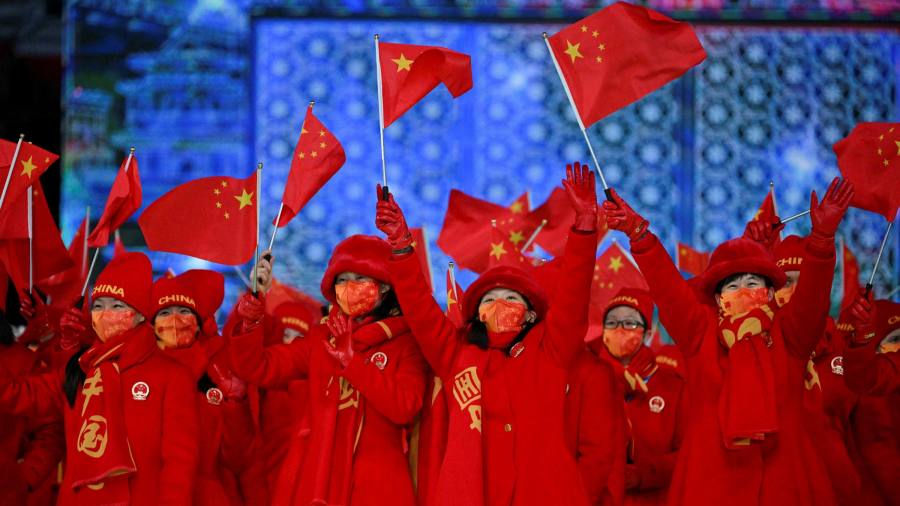 China’s first Winter Olympics got under way on Friday with a muted opening ceremony that exemplified the closed nature of the games and the country’s increasingly complex attempts to defeat coronavirus.

President Xi Jinping briefly removed his mask to formally open the Beijing Games in the same Bird’s Nest stadium at which China announced itself on the international stage at its inaugural Olympics in 2008.

But the mood on Friday contrasted sharply with the triumphant scenes 14 years ago, with Beijing 2022 already marked out by a western-led diplomatic boycott over human rights abuses and China’s battle to contain the spread of the virus two years after it first emerged within its borders.

Athletes entered the stadium amid a throng of masked cheerleaders and were escorted to seats encircled by staff in hazmat suits, reflecting the strict measures China has taken to try to limit the spread of the virus both at the games and across the country.

But a closed loop system has also cut the nearly 3,000 athletes and other visitors off from their surroundings in an effort to stop transmission of the virus, with participants confined to their hotels and specific event venues which they can access only through official transport.

“Unfortunately, the global pandemic is still a reality for all of us,” Thomas Bach, head of the International Olympic Committee, said in his opening remarks, acknowledging those athletes who “because of the pandemic can not make their Olympic dream come true.”

The tense geopolitical backdrop was on show as Xi met his Russian counterpart Vladimir Putin before the opening ceremony. One of China’s torch carriers, Dinigeer Yilamujiang, is from the Xinjiang region where persecution of the Uyghur minority has prompted the diplomatic boycott by countries including the US and UK.

Efforts to mitigate the spread of the virus are extreme, with staff donning full personal protective equipment and dousing floors and surfaces with disinfectant at regular intervals. Robot systems deliver food and mix drinks in some common areas, and individuals within the closed loop are required to wear high-grade face masks.

But with about 300 Covid-19 infections among the athletes and personnel arriving in Beijing’s closed loop – and a daily tally that now surpasses that for the rest of China combined – the competition outlook and training regiments for some top sports stars have already been disrupted. Elena Meyers Taylor, a US bobsleigh favorite, is in isolation after contracting the virus upon arrival in Beijing, while Johannes Thingnes Boe, a reigning biathlon champion from Norway, will have to train and live in isolation after being identified as a close contact of a confirmed positive case.

Olympic tickets are not on sale to the public, though organizers said this week that 150,000 individuals would be invited to watch events without providing exact details. While fans are absent, proceedings are supported by thousands of masked Chinese volunteers who will be required to quarantine for up to three weeks when they leave the bubble.

It was not clear who organizers had invited to attend Friday’s ceremony or whether they were already part of the closed loop or other invited guests. The IOC and Beijing organizing committee did not immediately respond to requests for comment.

Zhang Yimou, the film-maker who directed Friday’s event and the 2008 opening ceremony, cited the need to consider pandemic safety precautions and said the cold weather had limited the spectacle this time around.

“The 2008 opening ceremony was a perfect stage for us to showcase ourselves to the world for the very first time,” he said. “Now things have changed. China’s situation today is totally different compared to the past in terms of China’s position in the world. ”