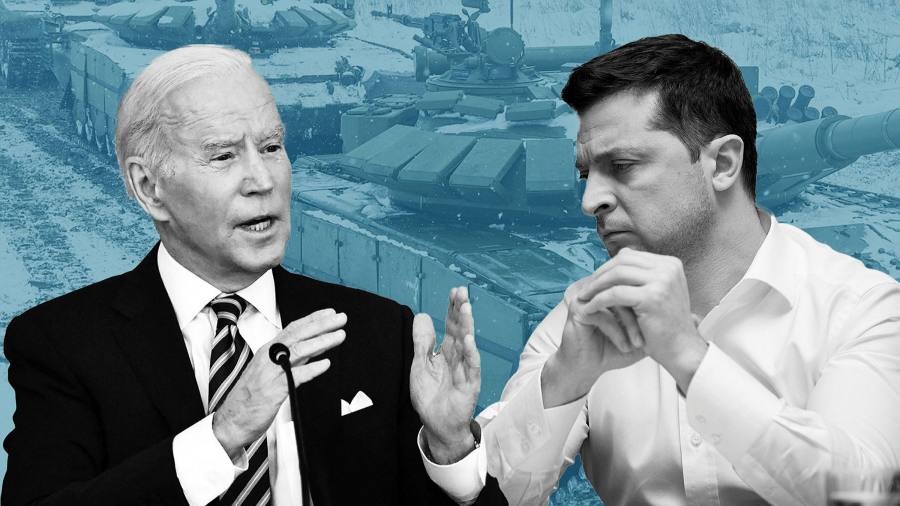 Joe Biden has tried to ensure that the US and its partners remain united in responding to the threat to Ukraine from Russia’s military build-up, but one source of discord has come from an unlikely source: Ukraine’s own leader.

Last month, President Volodymyr Zelensky rebuked Biden on Twitter for suggesting that a “minor incursion” by Russia might not prompt a severe response from the west – forcing Washington to row back on the comments.

He then complained that the west, including the US, was exaggerating the prospect of an attack by Vladimir Putin’s forces and unnecessarily pulling diplomats’ families out of Ukraine. “We do not need this panic. . . we do not have a Titanic here, ”Zelensky said.

The relationship between Biden and Zelensky could be a critical factor as the stand-off over Ukraine reaches its endgame in the coming weeks, with Putin either stepping back from the brink or ordering his troops to invade.

Andrew Lohsen, a fellow in the Europe, Russia and Eurasia program at the Center for Strategic and International Studies, said any rift between Biden and Zelensky on the Russian invasion threat risked becoming “grist for Russian disinformation” and a “real gift” for Moscow . He said he expected a “very concerted effort to get back on the same message”.

In a notable shift after Zelensky’s pushback, Jen Psaki, the White House press secretary, said on Wednesday that the Biden administration was no longer using the word “imminent” to describe a possible Russian attack, and instead, that it might happen at any moment .

“We stopped using [imminent] because I think it sent a message that we were not intending to send, which was that we knew President Putin had made a decision, ”she said.

But some foreign policy experts say the tensions have been serious.

“The US is doing all it can to support Ukraine, getting its allies on board, and sending them more defensive equipment. And yet you have President Zelensky publicly chastising the United States, ”said Angela Stent, a senior fellow at the Brookings Institution in Washington.

Ukraine certainly has to look out for its own economic wellbeing. And I think that’s what we’re seeing is really driving these comments. Whereas the US is really in the driver’s seat, in terms of making sure that Ukraine’s partners are still presenting a united front, ”he added.

That view is shared in Kyiv. Maria Zolkina, an expert at Kyiv’s Democratic Initiatives Foundation think-tank, said the US “to some extent exaggerates” the Russian threat, while Kyiv “partially underestimates it. This is a reflection of the interests of both sides in negotiations with Russia. ”

The US and Ukrainian leaders are certainly coming to the crisis from very different backgrounds. Biden, 79, has been involved in foreign policy for decades. He was chair of the Senate foreign relations committee and as vice-president took a leading role when Russia annexed Crimea in 2014.

The following year he addressed Ukraine’s lower chamber of parliament, telling lawmakers: “If you succeed, you will be the founders of the first truly free, democratic, united Ukraine.” In contrast, 44-year-old Zelensky, a former comedian, was a political novice when he became Ukraine’s president in 2019.

“The difficulty of managing Zelensky is to be expected and that’s because he is an iconoclast, he won the presidential election as an outsider standing up to the establishment,” said Charles Kupchan, a professor of international affairs at Georgetown University.

Shortly after becoming president, Zelensky was pressured by Donald Trump to dig dirt on Biden’s family for political reasons, revelations that led to Trump’s first impeachment trial and a souring of relations between Washington and Kyiv.

After the Trump era, US-Ukraine relations were rekindled, but there were still hiccups. Kyiv was unhappy over Biden’s withdrawal of sanctions on Nord Stream 2, the gas pipeline that links Russia and Germany, bypassing Ukraine. Zelensky was also not pleased that Biden met Putin in Switzerland last June, more than two months before his own meeting with the US leader.

When Zelensky eventually met with Biden in Washington in September the talks resulted in a new agreement on a strategic partnership between the two countries.

Still, some Ukrainian officials privately fear that the US is ratcheting up pressure on Russia in order to quickly strike a deal involving autonomy for breakaway eastern Ukrainian regions, allowing Washington to turn back to China as its main foreign policy priority.

Washington, meanwhile, has been at pains to underline its support for Ukraine, and both sides are trying to stamp out any sense of division. A US official this week pointed out that Biden had spoken three times with Zelensky recently, while contacts between other US officials – particularly Jake Sullivan, the national security adviser, and Mark Milley, the chair of the joint chiefs of staff – and Ukrainian counterparts have been frequent. There are talks between Washington and Kyiv over a new emergency economic aid package.

“We may have a difference of opinion on some issues, but those are friendly, open and candid discussions,” said Oksana Markarova, Ukraine’s ambassador to the US, in an interview with CBS on Sunday.

Mykhailo Podolyak, an adviser in Zelensky’s administration, was also keen to talk up the relationship. “There are no disagreements and no frustration and the presidents work quite productively. President Biden understands the Ukrainian context very well. His administration provides Ukraine with more support than ever before. ”

Meanwhile, the US still harbors some of its own doubts about Zelensky’s presidency. For instance, it has reacted skeptically to the trial on treason charges of former Ukrainian president Petro Poroshenko, saying it should be based on the “rule of law” rather than “politics”.

But for now, despite the friction with Zelensky, some commentators believe Biden may be satisfied that the Ukrainian president is underreacting rather than overreacting to the Russian threat. “Measured behavior is better than hot-headed behavior in Kyiv,” said Georgetown University’s Kupchan. “That’s in part because the international community – the US and NATO – are trying to be firm without being provocative.”