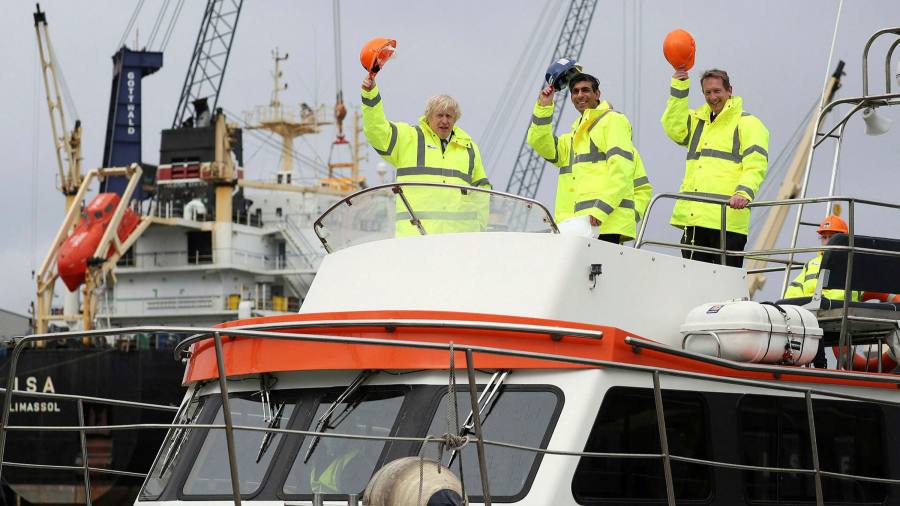 Boris Johnson announced the creation of two new freeports in Scotland on Monday, as he attempts to move on from questions about his leadership by focusing on domestic policy priorities.

The UK prime minister is hoping the week-long parliamentary recess will give him some respite after facing intense pressure from backbenchers in recent weeks.

Tory MPs are waiting for the Metropolitan Police’s investigations into the so-called “partygate” scandal to conclude before deciding whether to call for a no-confidence vote in his leadership. Johnson is due to complete a police questionnaire this week about his involvement in several Downing Street parties that broke coronavirus restrictions.

The police’s inquiries are not expected to be concluded until early March, according to those with knowledge of the process. The questionnaire, which was sent to Johnson on Friday, will be completed in co-operation with his lawyer. One Whitehall insider said it would not be dealt with in Number 10 as “people in the PM’s office may be potentially implicated.”

One senior aide said that Johnson would be “beavering away on domestic policy” throughout the week, but added that he was prepared to “clear his diary” if Russia invades Ukraine in the coming days.

The prime minister hopes to shore up his position with several announcements designed to appeal to backbench MPs. Steve Barclay, Number 10’s new chief of staff, pledged on Sunday that the Johnson government would “step back” and favor “a smaller state.”

Writing in the Sunday Telegraph, he said it was “a priority to restore a smaller state – both financially and in taking a step back from people’s lives, adding government needed to“ trust the people, return power to communities, and free up business to deliver. ”

The plans for two Scottish freeports, special economic zones that benefit from lower taxes, follow the eight announced in England last year. The government said the program would add £ 24bn to the UK economy and encourage £ 25bn of private sector investment. Some leading economists question their value, however, suggesting that they simply relocate activity.

The two Scottish projects will have a focus on green investment, in part to please the Scottish government, which has been skeptical about freeports. Bidding will open in the coming months and be completed by the summer, with £ 52mn of seed funding from the UK government. They are expected to be operational by spring 2023.

Johnson said that the two projects would “accelerate our plan to level up communities” across the whole of the UK. “They have the power to be truly transformational by creating jobs and investment opportunities to enable people to reach their potential, and I am delighted that people across Scotland will reap the benefits.”

Kate Forbes, Scotland’s finance secretary, said that the green element “recognizes the distinct needs of Scotland” and would help the commitments of government in Edinburgh to achieve net zero.

She added: “Scotland has a rich history of innovative manufacturers and so as we look to grasp the many opportunities of achieving net zero, the establishment of green freeports will help us create new green jobs, deliver a just transition and support our economic transformation. ”

UK Chancellor Rishi Sunak said the freeports would “boost innovation and trade, create new jobs, and level up communities as we deliver lasting prosperity across the UK.”