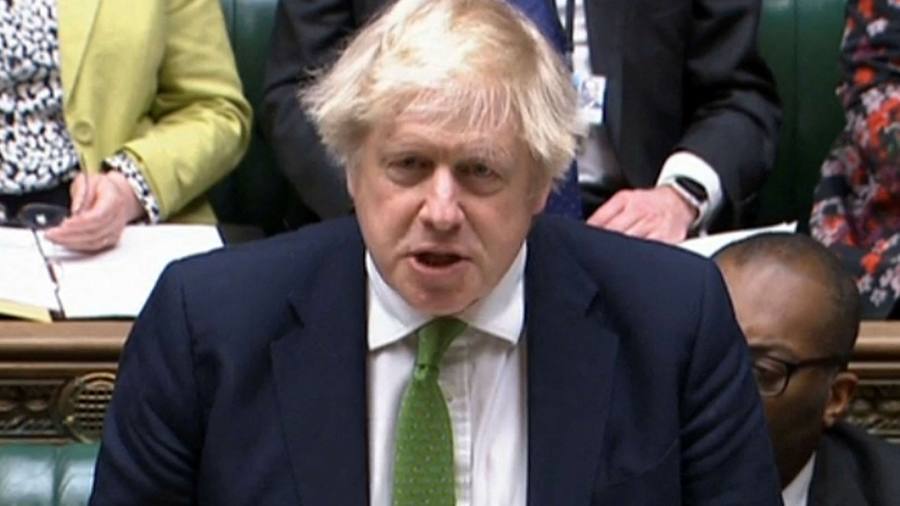 The reaction came after the UK prime minister announced punitive measures in the House of Commons that targeted five medium-sized or small Russian banks and three billionaires close to Vladimir Putin.

The move followed the Russian president’s decision on Monday night to recognize the separatist rebel enclaves in Ukraine’s Donbas region and send in the military.

But in light of Germany taking the big step of pulling the plug on the Nord Stream 2 gas pipeline earlier in the day, many British MPs were disappointed that Johnson’s promised “first barrage” of sanctions against Russia was not more robust.

Johnson claimed the measures were “draconian” and would be ratcheted up, but Sir Iain Duncan Smith, former Conservative leader, warned the first sanctions did not go nearly far enough to “hit” the Russian government.

Tom Tugendhat, Tory chair of the Commons foreign affairs committee, said: “The ratchet could be misinterpreted as giving a free pass at an early stage, rather than drawing a clear line that needs not to be crossed.”

Sir Keir Starmer, Labor leader, “understood” why sanctions were being held back to deter further Russian aggression, but said: “A threshold has already been breached. A sovereign nation has been invaded. ”

Starmer called for Russia to be excluded from financial mechanisms such as the Swift international payments system, a ban on trading the country’s sovereign debt and for RT, the Kremlin-backed news channel, to lose its license, preventing it “from broadcasting propaganda around the world ”.

In what he described as the “first tranche” of sanctions, Johnson announced an asset freeze and a ban on entering the UK on three oligarchs: Gennady Timchenko, and Boris and Igor Rotenberg. All three are already on the US sanctions list.

Assets of five Russian banks, which Johnson claimed were involved in bankrolling the Russian invasion, were frozen with immediate effect, although UK officials could not say what assets they – or the three oligarchs – had in Britain.

The banks facing sanctions are Bank Rossiya, which Britain claims is close to the Kremlin, Black Sea Bank for Development and Reconstruction, IS Bank and GenBank. All four are already subject to US sanctions. 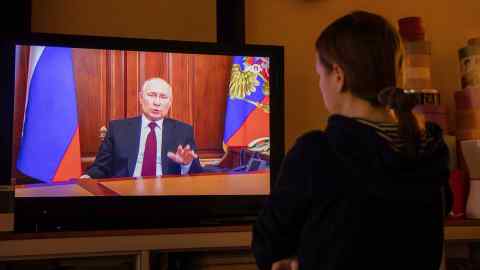 The assets of a fifth bank, Promsvyazbank, which has close links to Russia’s defense sector, have also been frozen. It is the only institution among the country’s top 10 biggest banks that was targeted.

Tom Keatinge, an expert in finance and security at the Royal United Services Institute think-tank, was dismissive of the UK measures. “All the talk on sanctions so far has meant to be a deterrent and we have turned up to a gunfight with a peashooter.”

Jason Hungerford, partner specializing in sanctions at Mayer Brown, agreed. “To say the UK sanctions list is underwhelming is an understatement,” he said.

Anton Lopatin, senior director at Fitch Ratings, said: “Promsvyazbank is the largest bank in this list, but this is a bank focused on military financing. It operates with companies operating in the defense industry. Adding it to the UK sanctions list will have very little impact. ”

Johnson insisted Britain would impose much tougher sanctions if Putin ordered troops further into Ukraine. He said those measures would include “stopping Russian companies raising money on London markets or stopping them even trading in pounds and dollars”.

British officials said the sanctions package was being “closely co-ordinated” with the EU and NATO allies and that new measures would be unveiled “in waves”. Downing Street has said Russian aggression so far did not amount to “a full-scale invasion”.

Subsequently, Liz Truss, UK foreign secretary, said Britain would “prohibit a range of high-tech exports and further isolate Russian banks from the global economy” if Putin did not “pull back from the brink”. Russian defense, chemicals, tech and energy companies would also be targeted.

Britain would also impose sanctions on members of the Russian parliament who voted to recognize the independence of Donetsk and Luhansk, while no UK individual or business would be allowed to deal with non-Kyiv-controlled regions in eastern Ukraine, she added.

British officials said the UK would apply more sanctions in the event of further Russian aggression but that more measures would also be introduced if Putin refused to de-escalate and withdraw troops from eastern Ukraine.