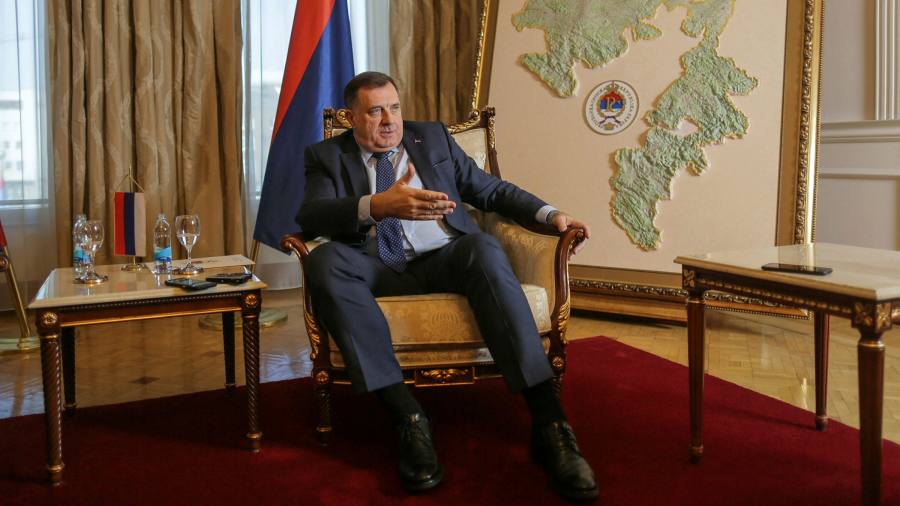 Bosnian Serb leader Milorad Dodik says he remains determined to defy the west and win greater autonomy for ethnic Serbs in Bosnia, reversing years of gradual centralization he insists outsiders have forced on the country since the postwar settlement of the 1990s.

Such a move could destabilize the entire western Balkans and risk plunging it back into violence, according to regional and western leaders.

Asked if he was prepared to make good on his threat to withdraw the Serb Republic – one of two ethnically based entities that make up Bosnia – from national-level institutions, Dodik told the Financial Times in an interview: “Of course. I do not think we should be taken lightly. We are fully convinced we are right. ”

But Dodik, a former center-left politician who has become increasingly nationalistic, said he would stop short of risking violence in pursuit of his goals. “I do not want a war. That is not our agenda, ”Dodik said. “I will not sacrifice peace for the status of Republika Srpska.”

Bosnia’s entities, the Serb Republic and the Bosniak-Croat Federation, were established by the 1995 Dayton Agreement that ended the wars of the 1990s after the break-up of Yugoslavia. In December, lawmakers in the Serbian regional parliament in Banja Luka alerted western powers by voting to separate the Serb Republic’s tax authority, judiciary and armed forces from Bosnia.

While the vote was non-binding, opponents saw it as advancing Dodik’s agenda for secession from Sarajevo – reigniting fears among regional leaders and diplomats of a collapse of the Dayton deal and a domino effect, with violence spreading across the western Balkans.

In response, the US imposed sanctions on Dodik. “Dodik’s actions threaten Bosnia’s stability, sovereignty and territorial integrity and undermine the Dayton Peace Accords, thereby risking further regional instability,” the US Treasury Department said as it announced the move last month.

Dodik rejected accusations that his ambitions undermined Bosnia’s stability. He envisaged Bosnia as a loose federation with wide regional autonomy, and insisted secession was not among his goals.

“If there is no agreement that will satisfy all stakeholders, a question arises of what happens to Bosnia then,” he said. “But there is no secession plan.”

Dodik insisted Bosnia must maintain the ethnic boundaries established by Dayton, and the wide autonomy he said it granted to the country’s three main groups: Muslim Bosniaks, Catholic Croats and Orthodox Serbs. Later changes had tipped the power balance away from the separate entities to the federal level and so given Bosniaks – the largest group in Bosnia – greater influence, he argued.

“Constitutional competencies have been changed. The state level of Bosnia was given undue powers, ”he said. “We are not enthusiastic about Bosnia. Bosnia was imposed on us. “

He added: “Westerners came to me saying: never mind [the original Dayton deal], let’s do something that will appeal to generations in a century. And I tell them: well, never mind your idealism. Bosnia will be realistic. . .[foreign politicians]should not take sides. ”

He contended that under Dayton, Banja Luka also had the right to control public assets such as land and that the original accord had not given Sarajevo powers over military, judiciary or fiscal matters.

“How come, then, that I am being called out for trying to make sure the [original Dayton] agreement is honored? ” he said.

Dodik was initially backed by the west as he confronted war crimes and sought to move forward from the divisions of the past. He served two terms as the Serbian Republic’s premier between 1998 and 2010, when he became the entity’s president. Since 2018 he has been the Serb representative in Bosnia’s national three-person presidency.

However, his growing nationalism, ties to Russia and allegations of corruption, which Dodik denies, have soured relations with NATO and western capitals.

Dodik denied his agenda was linked to Moscow’s and said Bosnia should “stay neutral” as fears grow of a Russian invasion of Ukraine.

While the west ignored Bosnian Serb opinions on the perceived dangers of multi-ethnic societies and limiting external influence, hardline leaders such as Russian President Vladimir Putin and Hungarian Prime Minister Viktor Orban embraced them, he said.

Like Russia, Serbs everywhere were suspicious about the role of NATO in Europe, Dodik acknowledged.

“I have sympathy for Russia believing its security is inviolable and that it should protect its security,” he said. “Nato twice bombed Serbs without [UN] Security Council backing. . . That has shaped Serbs’ collective sentiment. It is unfair to expect us to sympathize with those who dropped bombs on us. ”

Dodik visited the Kremlin in December. “Putin never told me I should do anything[and]always said he respected the Dayton Agreement, ”the Bosnian Serb leader said.

In his state of the nation address at the weekend, Orban criticized “superpower arrogance” in the western Balkans and said Hungary would not support the EU if it moved to impose sanctions against the Bosnian Serbs.

“We will not accept decisions in Brussels that are against Hungary’s interests,” he said. “Since Hungary has an interest in peace, economic development and the inclusion of the region in the EU, there can be no question of sanctions and punitive policies.” 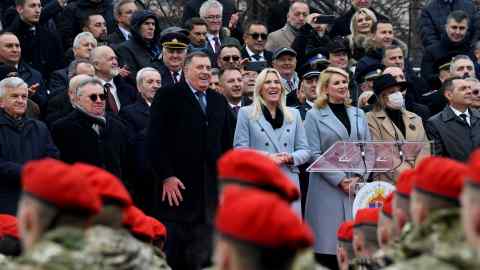 The west had sought to nudge Bosnia toward a western-style liberal democracy, Dodik argued. Last year, he ordered Serb lawmakers to boycott work in the Sarajevo parliament in protest over a genocide denial ban imposed by the then high representative Valentin Inzko.

Dodik singled out the UK for criticism after foreign secretary Liz Truss endorsed the US sanctions in January. “Britain returns here. . . telling us stories about integration just as they left the EU. They have the right to their position, and we do not? ”

Sanctions would only strengthen him and his party ahead of national and regional elections in October, he said.

“We will pull off a landslide,” he said. “Somewhere else, American sanctions might help take down politicians. Here, if foreigners. . . want to punish or disqualify someone, [that person] will gain in popularity. . . I enjoyed less support before the [US] sanctions than now. ”