Canada inspires other nations to consider tariffs on Russian trade 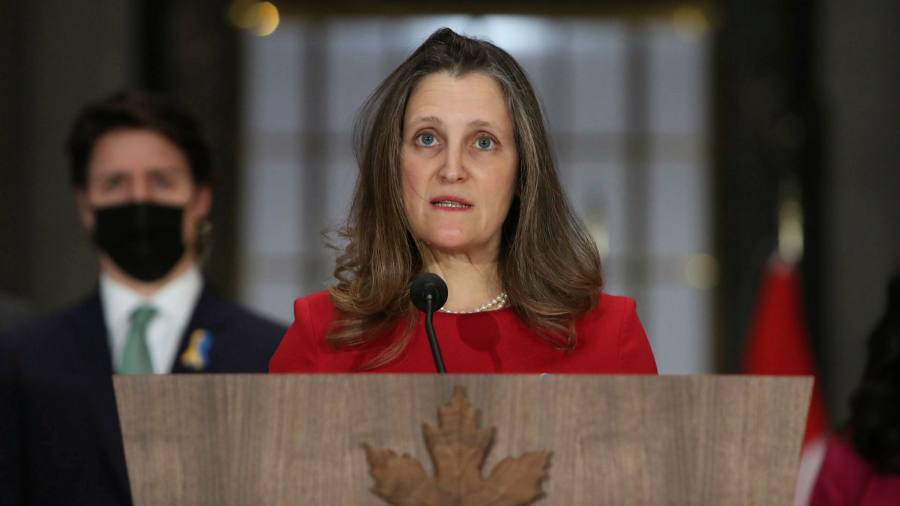 Russia faces the prospect of widening trade sanctions as countries consider following Canada by imposing tariffs on almost all Russian imports in response to Moscow’s invasion of Ukraine.

Ottawa on Thursday withdrew Russia’s “most favored nation” trade status, putting tariffs of 35 per cent on the bulk of imports. The US and EU said on Friday they were also considering further action on trade.

“USTR is considering a range of options, and working with members of Congress, to advance a resolute, effective and united global response to Putin’s premeditated, unprovoked and unjustified attack on Ukraine,” a spokesman for the US trade representative told the Financial Times.

A European Commission spokesperson said member states had agreed in principle to end MFN status for Russia. “There is strong support to work with like-minded countries on a joint statement and a willingness to take appropriate trade measures as an action,” she said.

Under World Trade Organization rules, countries cannot discriminate between members and must trade with them on the same terms offered to others, known as “most favored nation” treatment.

Canada has used an exemption in WTO legislation that allows members to take action to “protect their security interests” during a war.

The move affects Russia and Belarus, which has applied to join the WTO. The two countries and North Korea will be the only nations subject to Ottawa’s general tariff.

Chrystia Freeland, Canada’s Deputy Prime Minister, said: “We are working closely with our partners and allies to encourage them to take the same step.

“Russia and Belarus will no longer receive the benefits – particularly low tariffs – that Canada offers to other countries. . . The economic costs of the Kremlin’s barbaric war are already high and they will continue to rise. ”

The EU measures could involve complete bans on products, officials said. Last week the bloc banned imports of potash, cement, steel and other products from Belarus.

Bernd Lange, chair of the European parliament’s international trade committee, tweeted: “We can not continue with business as usual in the WTO when it comes to trade with Russia. One step could be to remove MFN status. ”

The EU is Russia’s biggest trade partner and imported € 95.3bn of its goods in 2020, although more than two-thirds was oil and gas.

Geraldo Vidigal, assistant professor of international trade law at the University of Amsterdam, wrote on Twitter: “There is little doubt that we are in a ‘war or other emergency in international relations’,” referring to the wording of the WTO exemption. “So, in the abstract, the exception applies in the sense that [WTO] members can do some things that they otherwise would not be allowed to do. ”

They can “protect their essential security interests” under the exemption, which could include the preservation of international borders, he said.

Countries could impose any tariff level they wished but were wary of setting a precedent for future conflicts, he added.

Two US congressmen have proposed legislation calling for Russia to be expelled from the Geneva-based body but experts have said this would not be possible.

“Suspending Russia from WTO activities or membership is a completely different set of issues and probably impossible under WTO rules and procedures, unless Russia itself wants to leave,” said Peter Ungphakorn, a former WTO official.

England’s law, not its lawyers, is to blame for the oligarch gold rush


Letter from Ukraine: the language of war