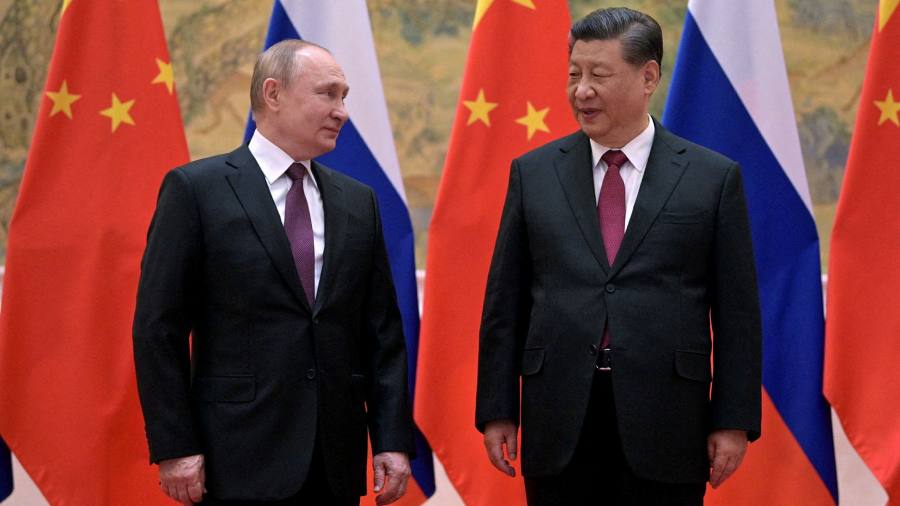 Russia’s invasion of Ukraine threatens to reshape the world, carving two rival camps out of today’s highly interconnected international order. On one side would be Russia and its “strategic partner” China. On the other would be the US and also a Europe that has tended to consider its relationship with China primarily in terms of commerce.

Just over a week ago such a scenario might have been seen as paranoid. But so much has changed since Vladimir Putin launched a full-scale attack on Ukraine that a return to cold war dynamics, more complex than 30 years ago, seems in prospect.

Already, the sanctions on Russia imposed by the US, EU and UK are unprecedented. They include planned measures against leading figures – including Putin himself – as well as sanctions on Russia’s central bank and the removal of some of its lenders from the Swift payments system. Other nations also announced moves.

In this context, China’s role is crucial. Beijing should be aware that a failure to condemn Russia risks portraying China as an enemy in the eyes of European powers. That may sound extreme, but is in fact logical when Putin is issuing veiled nuclear threats.

So far, China’s statements suggest a clear affinity with Russia, in spite of signs that it may be growing cooler towards its neighbor. China should follow through with urgency on signals this week that it is ready to play a role in finding a ceasefire. It should also make clear that it condemns Russia’s killing of civilians. If it does not, the west may regard it as complicit in slaughter.

Hua Chunying, spokesperson for Beijing’s foreign ministry, declined to describe Moscow’s attack as an invasion. Before the fighting started, Hua also described the US as the “culprit” in the crisis, “heightening tensions, creating panic and even hyping up the possibility of warfare”.

At the Winter Olympics, Putin met with Xi Jinping, China’s president, and declared that their countries’ friendship had “no limits”, with no forbidden areas of co-operation. Beijing abstained from a draft UN resolution last week that would have deplored Russia’s invasion of Ukraine – though it did not join Moscow’s veto.

The west’s focus now will be on whether and to what extent China steps up economic support for Russia, helping it to withstand sanctions. When Putin met Xi this month, the two sides signed a raft of deals, including a 30-year contract for Russia to supply gas to China via a new pipeline.

Yet Beijing should realize that if its state-owned banks provide direct support to sanctioned Russian lenders, they will risk western sanctions on their own international business. The fact that Ukraine’s invasion has not been the pushover Russia may have planned for should also be a salutary lesson for China when it comes to Taiwan.

More broadly, China’s general attitude in this crisis will do much to determine how it is viewed. The Ukraine crisis strikes a visceral chord, especially in Europe. A China that backs a brutal regime waging an unprovoked war with democratic Ukraine cannot be excused. Beijing should start clearly and deliberately setting limits on its ties with Putin’s Russia.

It should reflect that if cold war dynamics do start to take hold and China finds itself hemmed in to a Russia-China axis, it risks cutting itself off from the most lucrative trading relationships it has. Although its trade with Russia grew last year by 36 per cent to $ 147bn, this figure amounted to no more than one-tenth of its combined trade with the US and EU. For its own sake, Beijing should be wary of going too far in its support for Putin’s war.