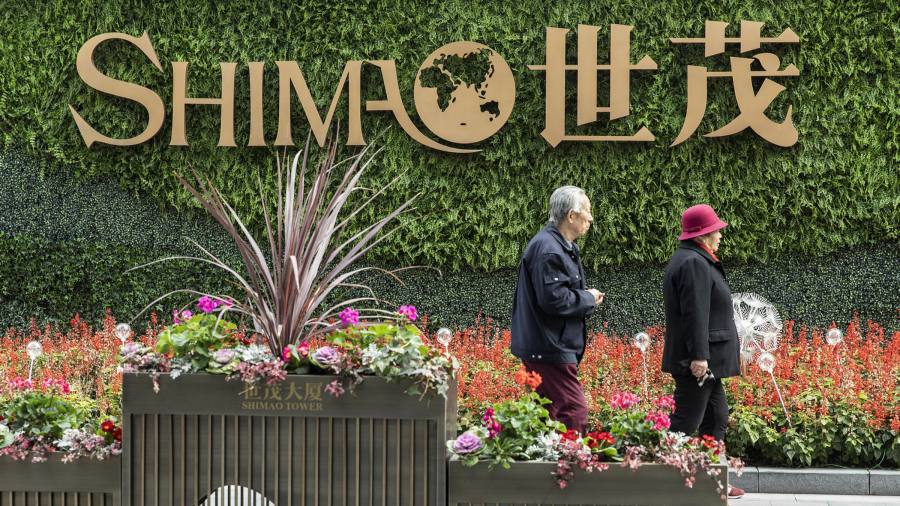 In late September, as a liquidity crisis at Evergrande put traders on high alert around the world, the bond prices of another Chinese property developer told a different story.

Shanghai-based Shimao, named after a father and son duo who have run the company since 2001, was rated investment grade by Fitch and deemed a safe bet. Even as Evergrande’s bonds plummeted, Shimao’s held firm.

But months later, its bonds are trading at 63 cents on the dollar and the company with a market capitalization of close to Rmb22bn ($ 3.5bn) has been forced to sell its prized assets after being sucked into a property bond market sell-off that has hit China’s biggest offshore borrowers.

The fate of Shimao highlights the vulnerability of China’s real estate companies to the sudden loss of market confidence in the wake of Evergrande’s collapse. Today a wave of top rated developers are struggling to refinance and being forced to dispose of assets quickly to repay upcoming debts.

“It’s very hard not only for Shimao but for almost all privately owned developers to refinance in any channel,” said Iris Chen, a Hong Kong-based credit analyst at Nomura.

Evergrande has struggled to complete asset sales. In January, Oaktree Capital, the US investment firm, seized one of its Hong Kong projects, as the world’s most indebted property developer embarks on the largest restructuring in Chinese history.

China’s property sector is grappling with deleveraging measures introduced by Beijing in 2020 that have contributed to a real estate slump and economic slowdown.

Working to avoid a deep property downturn, Xi Jinping’s government has softened its stance on real estate. In January, it cut interest rates and the lending rate used to price mortgages for the first time since April 2020.

The measures have helped calm the offshore bond market, which is a small portion of overall finance for Chinese real estate but one of the most widely used signals of its health in international markets.

An Ice Data Services index tracking Chinese high-yield bonds on international markets – which in November hit yields of 30 per cent, its highest since the financial crisis – is now trading at an effective yield of 22 per cent.

But the pain is not over for companies such as Shimao. Kenneth Ho, head of Asia credit strategy research at Goldman Sachs, said the default rate in 2022 could remain at the high level of 19 per cent this year, following a 28 per cent rate last year.

“The fact the dollar bond market is so stressed is reflective of the fact policymakers have tightened in a relatively short period of time,” he said. “Investors were not expecting credit conditions to be as tight as they are.”

In its 2021 interim report, Shimao said it had 424 projects in more than 110 cities across China, with its land bank concentrated in the Guangdong-Hong Kong-Macau area and the Yangtze River Delta.

By November, Shimao had been downgraded to junk status. Despite assurances in December that business was “normal”, Shimao has been forced to embark on vast asset sales to raise cash. It has to refinance public bond maturities worth Rmb6.4bn in the first half of the year and Rmb11.7bn in the second, according to analyst estimates.

In early January China Credit Trust, a company that raised trust financing on behalf of the group within mainland China, said in a letter to investors that one of Shimao’s units had defaulted after missing a Rmb645mn payment. Shimao responded by saying it had not defaulted on public debt.

Shimao’s bond maturing on July 22 is trading at 63 cents on the dollar. Up until October, it had been trading at par value.

Chinese state-backed companies have been buying assets from cash-strapped developers. Shimao has sold the Hyatt on the Bund, one of its prime assets in Shanghai, to state-owned enterprise Shanghai Land and has been marketing commercial real estate to investors in Hong Kong, according to an investor contacted on the matter.

Agile Group, another developer, last month sold a stake in a Guangzhou joint venture to the state-backed China Overseas Land and Investment, a real estate conglomerate.

“Shimao is very proactive in terms of trying to solve their problem. We have seen various assets they would like to sell, ”said the investor, contrasting the company’s approach to that of Evergrande and Kaisa, the sector’s second-biggest offshore bond issuer, which have struggled to close asset sales deals.

“This is not for show, this is for real. They are really trying to sell assets to help the cash flow situation, ”the person added.

Chen estimates Shimao will raise about Rmb25bn from asset sales, which should be enough to manage upcoming maturities.

The company’s future depends on confidence being restored, said Chen. “If the market sentiment does not change and they can not reopen financing channels and there is no material policy easing, then eventually they may need to do a debt restructuring,” she said.