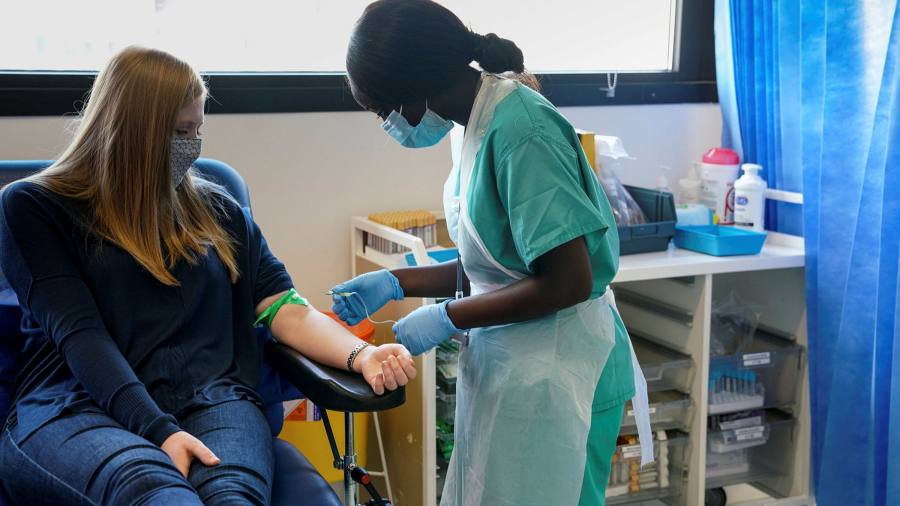 The world’s first study in which volunteers were deliberately infected with Covid-19 found that people started to develop symptoms and become infectious to others after just two days, much quicker than expected.

Scientists had previously estimated this incubation period to be five days.

The UK government-funded “human challenge” trial found that levels of the Sars-Cov-2 virus in the nose and throat peaked after five days, though participants remained infectious for an average of nine days and a maximum of 12 days after exposure.

The researchers said their results support guidance that people should quarantine for 10 days after they first feel Covid symptoms or have a positive test result.

The study took place in a special unit at the Royal Free Hospital in London. Eighteen of the 34 volunteers aged 18 to 29 became infected after receiving a low dose of the original Sars-Cov-2 strain via droplets in the nose.

None suffered serious symptoms though 13 temporarily lost their sense of smell. Only one volunteer still had that symptom after six months.

“Our study reveals some very interesting clinical insights, particularly around the short incubation period of the virus and extremely high viral shedding from the nose,” said Christopher Chiu, professor of infectious diseases at Imperial College London, who was the trial’s chief investigator.

The trial was a partnership between Imperial, the Royal Free and hVivo, a company specializing in human challenge studies that is part of the London-listed Open Orphan company.

Participants started to develop symptoms within two days of being given a tiny nasal dose (10 micrograms) of the virus. High levels of viral infection appeared first in the throat and almost immediately afterwards in the nose.

Levels peaked after five days, by which point the nose was the main site of infection. The researchers said the findings highlighted the importance of wearing face masks covering both mouth and nose.

Lateral flow tests were also shown to be a good indicator of whether someone was infectious.

“We found that overall, lateral flow tests correlate very well with the presence of infectious virus,” said Chiu. “Even though in the first day or two they may be less sensitive, if you use them correctly and repeatedly, and act on them if they read positive, this will have a major impact on interrupting viral spread.”

His Imperial colleague Professor Wendy Barclay said that, although 10 days of self-isolation was good guidance in the absence of testing, the results supported cutting that to five days followed by negative lateral flow test results on two consecutive days.

The study was initially launched to help test experimental vaccines, before Pfizer and BioNTech announced they had developed an effective jab in late 2020.

Jonathan Van-Tam, England’s deputy chief medical officer, said it had provided more “key data” on the virus, while further human challenge trials could be used to accelerate the development of other Covid vaccines and antiviral drugs.

Andrew Catchpole, chief scientist at hVivo, said that although the study focused on the original Sars-Cov-2 strain, and there are differences in transmissibility between it and the other variants, “the same factors will be responsible for protection against it, meaning the findings remain valuable for variants such as Delta or Omicron ”.

Open Orphan said it was developing a Delta strain of the virus with Imperial that could be used in future trials.