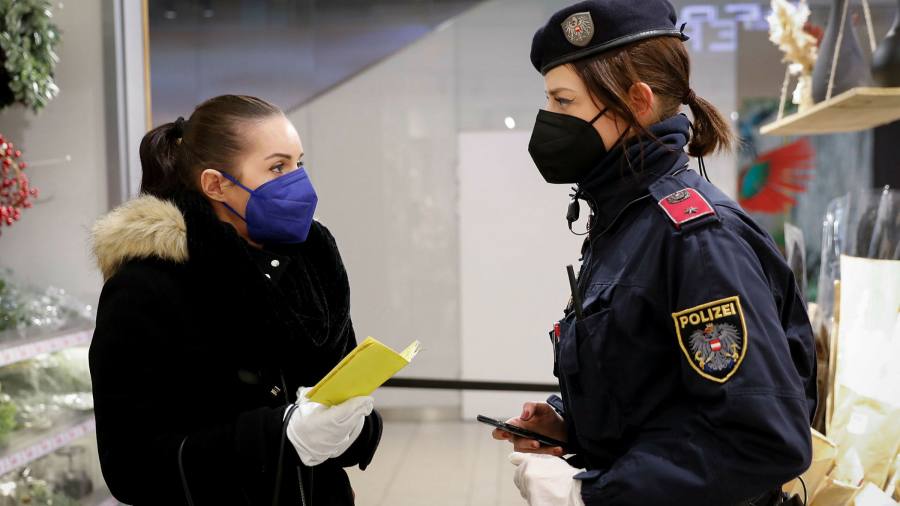 Austria became the first developed world country to write compulsory Covid-19 vaccines into law this week, with any citizen refusing the jab soon to be guilty of a criminal offense.

When the country’s conservative-led government announced its vaccine mandate plans late last year, surging infections in much of Europe left some wondering if Vienna was ahead of the curve.

Three months on and the opposite is the case: numbers are falling and many European countries, including neighboring Switzerland, have moved to loosen legal obligations on their citizens.

The turnround is a sign of the volatility and unpredictability of pandemic politics. Austria’s government now finds itself in a bind: committed to a policy that has broad public support, but with the prospect of that support very rapidly eroding.

“The government is really stumbling around and I think a lot of people perceive that,” said Thomas Hofer, a Vienna-based political consultant. “Polls show a majority are still in favor of the new law, but it’s hard to see how that does not fall.”

A sizeable minority of Austrians are resolutely opposed to the obligations contained in the Compulsory Vaccination Act, which President Alexander Van der Bellen will sign into force in the coming days. Large – and sometimes violent – anti-mandate protests have taken place in several Austrian cities in recent weeks.

Austrian chancellor Karl Nehammer, who is just two months into the job, has cast the new law as a victory for liberty, saying citizens would be better protected when the next wave of coronavirus hits. “The only path to freedom is through vaccination,” he told a parliamentary debate last month.

His conservative Austrian People’s Party (ÖVP), the country’s largest political group, draws support from older, traditional voters who mostly endorse the vaccine mandate. But the swing voters who the ÖVP has had success in targeting, including more moderate young people as well as wavering supporters of the hard-right populist Freedom party, are mostly opposed.

Efforts to sweeten the pill, including a lottery draw that offered those who could prove they had received a shot a chance to win shopping vouchers, looked increasingly desperate, Hofer noted.

With Denmark recently dropping all virus-related restrictions and the UK and others not far behind, Austria seems to be increasingly out of step with the rest of Europe, nor could the contrast with Switzerland be more stark.

Both ended 2021 with remarkably similar epidemiological profiles. Roughly a quarter of adults in each country were unvaccinated, while rising infections were pushing case numbers to their highest levels during the pandemic.

Yet while Austria proposed its sweeping vaccine law, Switzerland merely tweaked the rules on gatherings and venue capacity and said only boosted people could go to nightclubs. Bern said this week it was considering abandoning all of its Covid-19 restrictions completely, including mask wearing, from February 16.

Today, about 30 per cent of Swiss citizens are unvaccinated, compared with 24 per cent of Austrians.

Aware it is on delicate ground, Austria’s government has planned a gradual rollout of the new law. The first phase begins next week and will last until mid-March, when unvaccinated citizens will again be invited to get jabbed.

Police will then begin enforcing the law, conducting spot checks and issuing fines to those found to be unvaccinated. In the final stage, the start date of which has not yet been set, a national database will be used to track and fine the remaining holdouts.

It is unclear whether the measures will convince the roughly 2mn vaccine-hesitant Austrians. In January, the government sent individual letters to each of them to schedule vaccination appointments. Just 4 per cent responded and turned up.

A new party dedicated to opposing restrictive and coercive pandemic-related measures has also gained votes. The MFG, an acronym in German for “People, Freedom, Rights”, was initially derided as a party of vaccine skeptics and conspiracists, but it has drawn on an increasingly broad base of support.

“It’s absolutely not the case that we’re against vaccines,” said MFG chair Michael Brunner. “We consider vaccinations a fundamentally innovative and valuable form of medicine.

“But we believe vaccinations must always be voluntary,” he added, citing the Nuremberg Code, a set of ethical guidelines governing scientific research and human experimentation drafted after the second world war.

“I assume that a minimum of 2mn people are going to refuse to obey this law,” he continued. “It will not just be people who have not had a vaccine, but also many who for example are double vaccinated but do not want a third. People are not prepared to accept a lifetime of vaccinations. ”