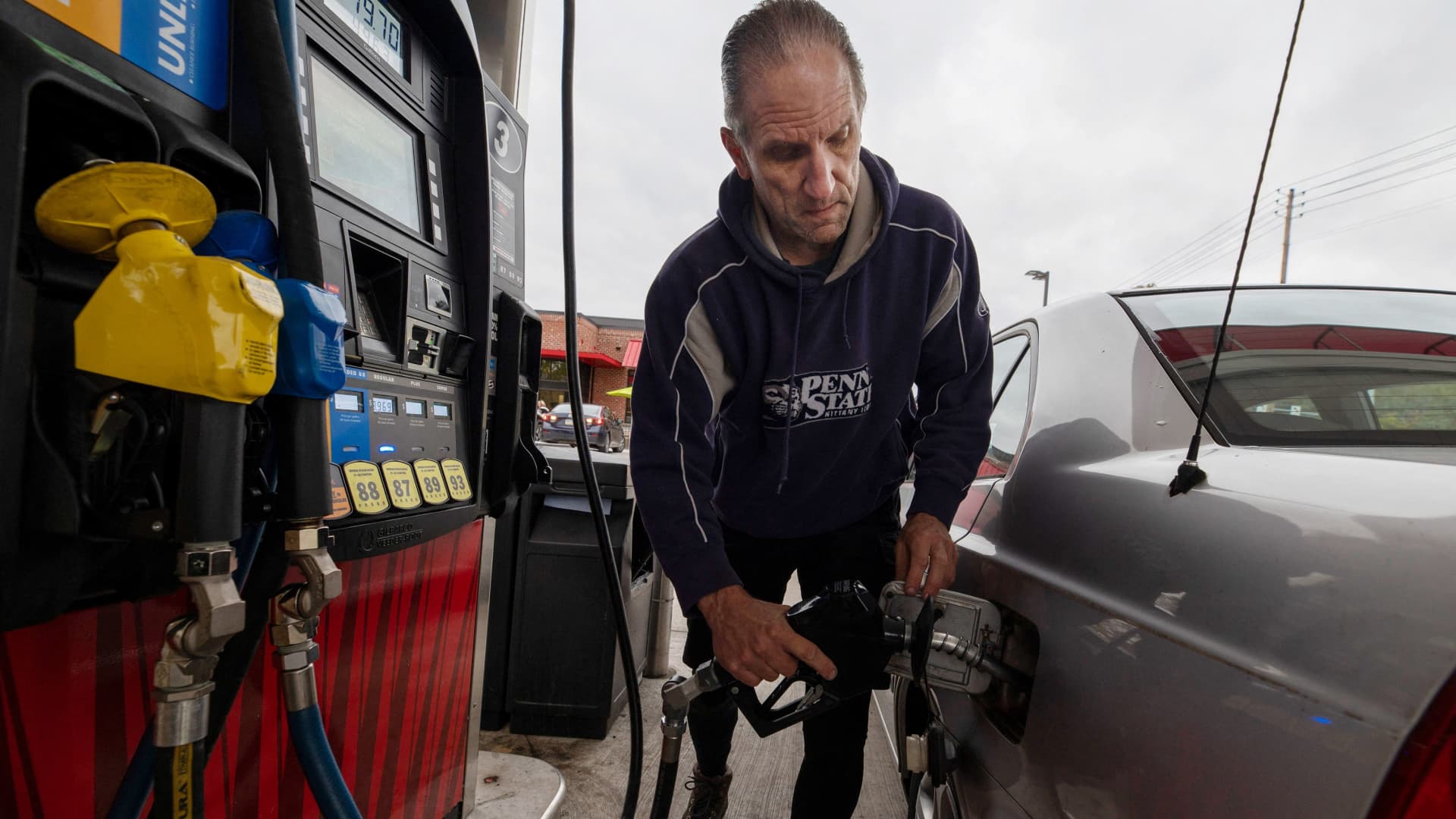 Tom Kaye of Plymouth, Pennsylvania tops off his neighbor’s gas tank for them on a gas station in Wilkes-Barre, Pennsylvania, US October 19, 2022.

Oil prices are defying expectations and are barely higher on the year, as the outlook for oil demand continues to deteriorate for now.

West Texas Intermediate crude futures for January were just above $77 per barrel in afternoon trading, following a drop to $73.60 per barrel, the lowest price since last December. WTI was up more than 2% for the year, after turning negative earlier Monday. 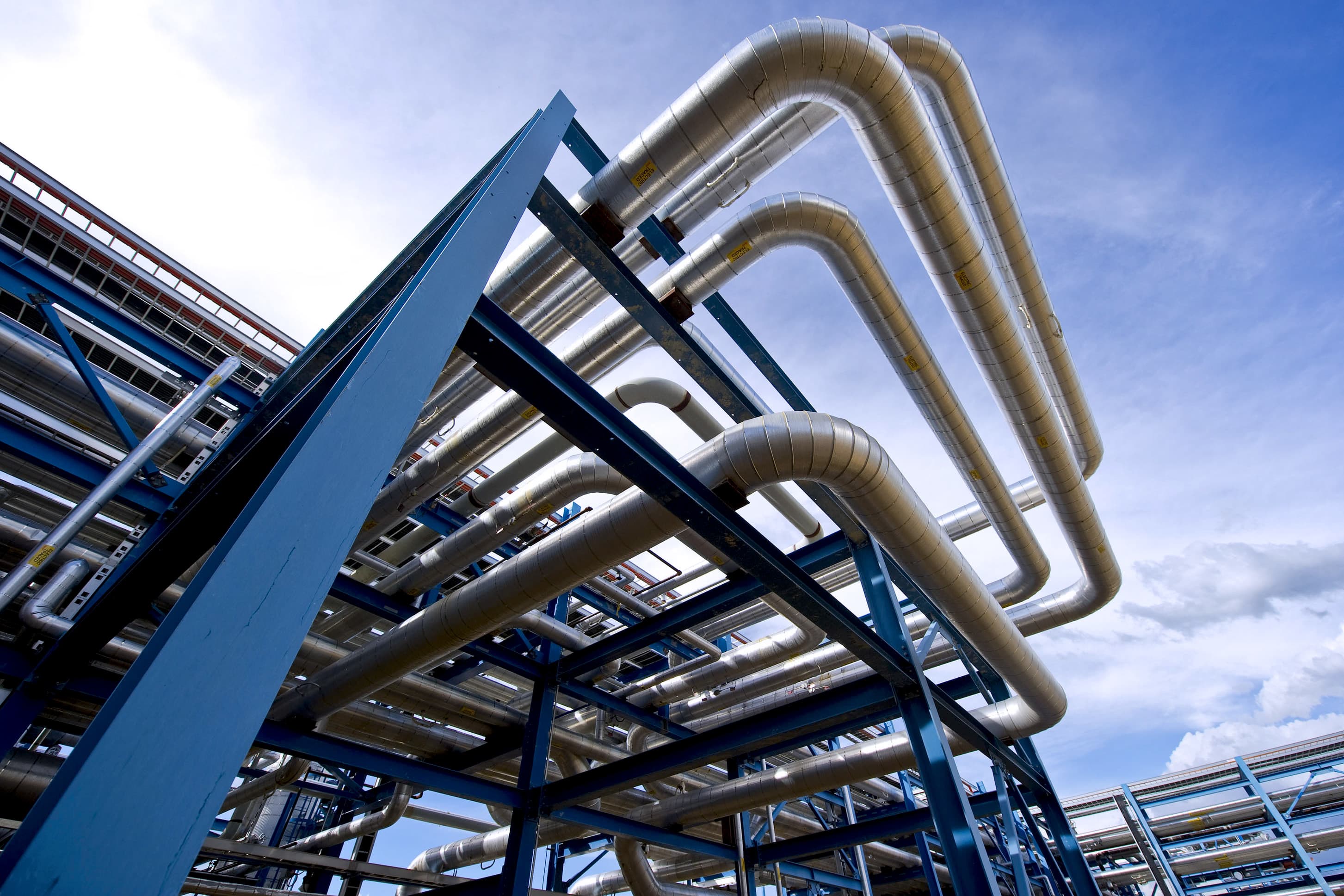 We’re adding to an oil stock on Monday’s dip, with a big buyer of crude on standby

Gasoline prices at the pump have also been falling dramatically and could be cheaper than last year for many Americans by Christmas, according to an outlook from the Oil Price Information Service. On Monday, the national average was $3,546 per gallon of regular unleaded fuel, down from $3,662 a week ago but still higher than the $3,394 a year ago, according to AAA.

‘Macro headwinds rather than tailwinds’

China’s lockdowns and the rare protests against Beijing this weekend have raised more doubt about the outlook for the country’s already weakened economy.

“We think the recessionary [forces] around the world, particularly in the three largest economies, are dominating the macro environment for the year as a whole, and we think that the issues we’ve been identifying as relatively bumpy in the period ahead are going to remain,” said Ed Morse , global head of commodities research at Citigroup. “Right now, we are looking at macro headwinds rather than tailwinds.”

Morse was one of the more bearish strategists on Wall Street in 2022, but he said the latest market developments and the hit to major economies made even his forecast too bullish. He had revised his outlook higher at the end of the third quarter, based on the shift by OPEC+ to focus on prices and the pending ban of Russian crude by Europe.

The oil market has been focused on those two potential catalysts for higher prices, but the impact on demand from the slowdown in China and new lockdowns has outweighed concerns about supply for now. The European Union’s ban on purchases of seaborne Russian oil takes place Dec. 5. The EU is also expected to announce price caps for Russian crude.

OPEC+ is also a factor. The group includes OPEC, plus other producers, including Russia. The group surprised the market in October when it approved a production cut of 2 million barrels a day.

“We’re waiting to see if they signal even deeper cuts. There were rumors in the market about that happening,” said John Kilduff, partner with Again Capital. After dipping to the day’s lows, oil rebounded on Monday as speculation circulated about new OPEC+ cuts, he said.

Brent futuresthe international benchmark, was lower Monday at $83.11, recovering from $80.61 per barrel, the lowest price since January.

“Right now the target is below $60 [for WTI]. That’s what the chart is indicating… this is a new low for the move because previously the low for the year was late September and now we’ve broken that,” said Kilduff. “It all depends on what happens in China. China is as important on the demand side as OPEC+ is on the supply side.”

“Our balances point to modest oversupply in coming months. Hence, we see Brent prices range-bound in the mid-80s to high-90s first,” the firm’s analysts wrote. “However, the market will likely return to balance in 2Q23 and undersupply in 2H23. With limited supply buffer, we expect Brent to return to ~$110/bbl by the middle of next year.”

Kilduff said he does not expect OPEC+ to make a big market impact this year with its cuts, although it is a wild card. Another factor that could drive prices would be if the war in Ukraine were to escalate.

“I’m not that worried about an OPEC+ cut just because the reality of it is most of the countries aren’t going to be cutting. It’s only going to be Saudi Arabia dialing back on the edges,” he said. “Everyone is so far into their quota. It’s a numbers game.”

Morse said market dynamics have changed and oil demand growth will be smaller as a percentage of gross domestic product. “We’re seeing a significant slowdown in global growth,” he said.

Oil demand growth for China turned out to be much less than expected. “We were thinking demand was sluggish. It turned out to be significantly more sluggish… We had thought this year was going to see 3.4 million barrels of demand growth. It actually grew by 1.7 million barrels,” Morse said. He noted that Europe’s demand is down by several hundred thousand barrels, and the US was flat in 2022.

Morse said the demand decline is also part of a bigger trend, tied in part to the energy transition towards renewables. “We are also looking for the peak of oil demand in this decade. It’s part of a longer term story,” he said.

Kilduff said La Niña’s weather pattern has also affected prices, with warmer weather in North America. He and other analysts say it could continue to impact the market.

“We keep getting cold outlooks, and then it falters. This is La Niña. You will get cold days, but then you get balmy stretches,” Kilduff said. He said concerns about winter heating fuel supplies have abated with a build in supplies in Europe.

The result for consumers could be a windfall at the pump during the holiday season. OPIS expects prices to keep falling into January before turning higher again.

“If you combine the Chinese demonstrations with the warm weather in the northern hemisphere, that’s kind of a double-barreled assault on the energy price at the moment,” said Tom Kloza, global energy analyst at OPIS. He said he expects gasoline to average between $3 and $3.25 per gallon at its low, but it will be below $3 in many parts of the country.

Kloza said by Christmas, the US national average should be slightly below the $3.28 level it was at last year.

Diesel prices have also been falling. According to AAA, diesel averaged $5,215 per gallon nationally Monday, off by about 8 cents per gallon from a week ago.

–Michael Bloom contributed to this story.