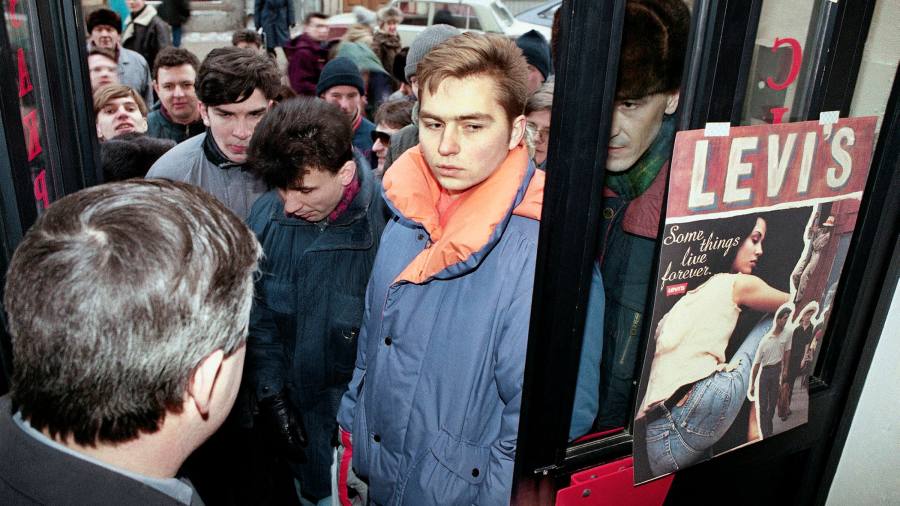 When Richard Nixon opened the American National Exhibition in Moscow in 1959, there were Pepsi-Cola bottles, Polaroid cameras and Dodge convertibles for the US vice-president to show off to Nikita Khrushchev, the Soviet premier.

But one of the biggest hits was a Levi Strauss stand where denim-decked Americans sang cowboy songs for Muscovites. Such was the demand for the company’s jeans that most of the samples on display were stolen.

That set the tone for the next three decades, in which Levi’s 501s “dzhins” became one of the most coveted products on Soviet Russia’s black market. By 1981, the Soviet Industry newspaper was complaining that their price had reached an “immoral” 200 rubles, the equivalent of a month’s salary for an engineer.

That history helps explain the heightened symbolism of Levi’s decision this week to suspend its sales in Russia following Vladimir Putin’s invasion of Ukraine. The “enormous disruption” in the region had made normal business “untenable”, the California company said, adding that operational considerations were “clearly secondary to the human suffering experienced by so many”.

Levi’s is joining a business exodus from Russia that has unfolded at a speed and scale with few parallels. On Tuesday, a string of similarly totemic western brands announced plans to pull back from the country, including McDonald’s, Coca-Cola, Pepsi and Starbucks. But of all the companies to suspend, close or spin off their Russian operations, few have the same symbolism as Levi’s.

Russia accounted for about 2 per cent of the group’s $ 5.76bn of sales last year, but those figures do not capture the brand’s residual significance a generation after the Soviet Union ended.

Levi’s 501s, the jeans that graced the cover of Bruce Springsteen’s 1984 album Born In The USA, became a potent symbol of dissent in the Soviet era.

As far back as 1972, the US magazine Life reported triumphantly that “the jeans that once encased the scrawny rumps of cowboys and gold miners of the American West have become the standard garb of the world’s youth.” Given their popularity behind the Iron Curtain, it said, Russians could be forgiven for seeing them as a capitalist conspiracy.

The hunger for American denim, valued for being softer than Russian textile manufacturers’ coarse workwear, became a tangible example of the soft power of American culture and western capitalism.

Counterfeit versions proliferated, resulting in an unusual method of determining whether a pair of Levi’s were authentic, according to Juliane Fürst from the Leibniz Center of Contemporary History in Potsdam, Germany.

“The litmus test for real jeans was to rub a wet match against the fabric,” Fürst recounts in her recent book on hippy culture in Soviet Russia. “The dye from real jeans would rub off, leaving a blue stain. . . Soviet-made jeans failed this test. ”

In 1984, the New York Times reported that a reader of Pravda had written to the Communist Party newspaper: “When you can make jeans better than Levi’s, that will be the time to start talking about national pride.”

The Soviets had replicated the atomic bomb but failed to replicate 501s, the historian Niall Ferguson said in his 2011 book, ‘Civilization: The West and the Rest’, which identified consumerism as one of the “killer applications” that had helped the west prevail .

Levi’s singular popularity behind the Iron Curtain was not entirely organic. The company used a series of goodwill initiatives as strategic marketing moves to boost the brand’s visibility in Russia.

In 1971, Levi Strauss fitted out the entire Soviet track team for a US tour. It also planned to provide jeans to 23,000 Russians working at the 1980 Moscow Olympics, only to rethink when the US boycotted the games. “No US team, no jeans,” a Levi’s executive said at the time.

The rebranding of jeans as a symbol of western freedoms rather than robust clothing for working men also benefited Levi’s, which still celebrates that era in its marketing.

The archive in Levi’s San Francisco headquarters keeps a letter alongside artefacts including Steve Jobs’ 501s and Albert Einstein’s tobacco-stained jacket. Written by a young woman from Moscow in 1991, it says: “A man has not very many happy minutes in his life. . . but the buying of Levi’s jeans (501) is one of such moments in my life. ”

Memories of that period still inspire Levi’s management. Chief executive Chip Bergh tells the story of having had a pair of 501s swiped from a German youth hostel in the 1980s, when they were “as good as currency”.

When Jennifer Sey, a former Olympic gymnast, left her role as president of the Levi’s brand recently, she recalled that she had brought 10 pairs of 501s to Moscow when she competed in the 1986 Goodwill Games. Russians “clamored for my denim and all that it represented: American ruggedness, freedom, individualism,” she wrote.

That symbolism was still in evidence in the 2006 election in Belarus, when the opposition to Alexander Lukashenko chose denim blue as the color for its campaign.

It took years after the Soviet Union collapsed for western brands to realize the commercial promise of its countries’ newly opened markets. Enthusiasm for the “Bric” markets of Brazil, Russia, India and China has been tested by repeated setbacks. But even within the past year Levi’s CEO was telling analysts that Russia represented a “significant” growth opportunity.

Bergh has been one of the most vocal western CEOs in advocating for a new form of capitalism, in which companies pay heed to stakeholders other than investors. He defines Levi’s mission as making “profits through principles”.

But the argument for pulling back on principle was more complicated, she argued: “If we’re saying human rights is the issue [in Russia] it’s very hard to justify being in China right now. ”

Levi’s industry rivals have been divided in their response to Russia’s invasion. H&M, Nike, PVH and Under Armor are among other apparel companies to have pulled back. But Fast Retailing, which owns Uniqlo, took the opposite approach.

“Clothing is a necessity of life – the people of Russia have the same right to live as we do,” said its chief executive Tadashi Yanai this week.

For some corporate observers, this split reflects how western capitalism has been recast since the cold war. In the stakeholder capitalism age, employees and consumers have far greater environmental, social and governance expectations of companies.

“It’s the first European war in the ESG age,” says Steven Fox, chief executive of the strategic intelligence group Veracity Worldwide. For a brand like Levi’s, “it’s going to be difficult to sit on the sidelines.”