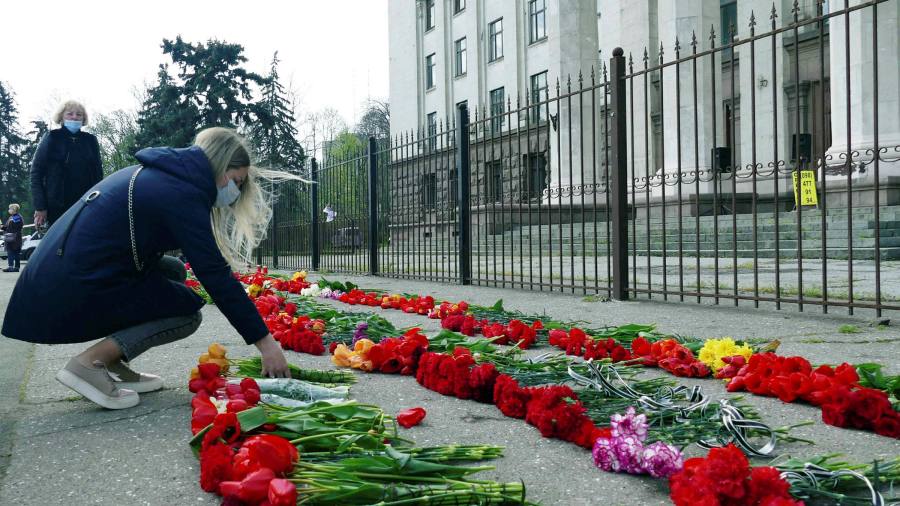 Outside Odesa’s trade union house, scene of a fire in 2014 that left 42 pro-Russia protesters dead, a makeshift shrine of crosses, candles and flowers commemorates the victims, along with a stark message fixed to a fence: “We’ll never forget , and never forgive ”.

Graffiti etched on a nearby flagpole is more ominous: “Ukraine – you’re gonna get so fucked up soon” and “your days are numbered”.

2014 was the last time communal tensions erupted into violence in Odesa, a port city on the Ukrainian Black Sea coast with a large ethnic Russian population. But with a Russian attack on Ukraine feared to be imminent, it might not be the last. “Odesa is cloven in two,” said Boris Khersonsky, a well-known local psychiatrist and intellectual.

Its divisions make it uniquely exposed in the current crisis. Many residents worry Odesa could become a key target for Vladimir Putin’s forces if war breaks out – and that parts of the population might even welcome a Russian invasion.

“Odesa is crucial to anyone who dreams of rebuilding the Russian empire,” said Oleksiy Goncharenko, a local MP. It has, he said, the same hold on the Russian imagination as Sevastopol, the Crimean naval redoubt that Moscow annexed in 2014. “That’s why the danger we face here is so great.”

This week has seen a frenetic diplomatic offensive aimed at ending the stand-off over Ukraine, one of the worst east-west showdowns since the cold war ended. After talks between Putin and French president Emmanuel Macron in the Kremlin, there was even a tentative talk of de-escalation. But in Odesa, tensions have, if anything, increased.

Many people in the city feel encircled. To the north-west there are Russian peacekeepers hunkered down in the separatist Moldovan enclave of Transnistria. To the south-east is Crimea, bristling with Russian arms. And to the south is the Russian Black Sea fleet, recently reinforced by six landing ships that have just passed through the Bosphorus Strait, ostensibly to take part in naval drills.

“Odesa is highly vulnerable,” said Volodymyr Dubovyk, director of the Center for International Studies at the city’s main university. “The fear is that it could be targeted in an amphibious assault, possibly combined with paratrooper landings. It’s geographically very easy to invade. ”

Even if there is no invasion, locals fear Russia could be planning something less spectacular but similarly damaging – a naval blockade which would throttle maritime trade and cut off one of Ukraine’s key export routes.

Either way, the big unknown is how Odesans would react if Russian forces attacked. “There are definitely a lot of people here who would welcome them,” said Khersonsky.

That is a consequence of the city’s unusual demographics: it contains many more ethnic Russians than most other Ukrainian towns. “They look more to Moscow than to Kyiv,” he said. “If Odesa is a country, its capital is Moscow.”

Moscow, too, looks to Odesa. Long revered as the birthplace of some of Russia’s greatest comedians, actors and writers, its peculiar brand of folklore and special humor enjoyed cult status in the Soviet Union. With its mix of roguish charm, faded glamor and its whiff of criminality – think a Black Sea Brighton Rock – it was always a world of its own.

But in 2014 the city’s easy-going, peaceful reputation was shattered. That was the year Moscow annexed Crimea and a separatist revolt broke out in Donetsk and Luhansk, in eastern Ukraine’s Donbas region. The violence then spread to Odesa where, on May 2, pro-Kyiv and pro-Moscow mobs fought vicious street battles.

Then, later that day, the trade union house in its city center was set on fire and dozens of pro-Russian protesters who had retreated there died, some from smoke inhalation, some after leaping from windows.

To some Odesans it was the moment they stopped their city becoming another Donetsk. But to others it was a massacre. “It became a rallying cry for Russians fighting against what they called ‘Ukrainian Nazis’,” Dubovyk said.

Alexander Prigarin, an ethnologist at Odesa national university, said that as Russian forces took control of Crimea, there were many in the city who wished their city would be next. A lot of small businessmen hoped Putin would come here and impose order. . . People envied Crimea, ”he said.

Since 2014, he claimed, things have got worse. He cited recent laws that aim to promote the primacy of the Ukrainian language and restrict the use of Russian in public settings. One, which came into force last month, compels all national print media to publish in Ukrainian. “You can not impose a language on people,” Prigarin said.

Odesa itself offers little evidence that Russians and their language are persecuted. It openly celebrates its ties to Russian culture and history and has a statue of Catherine the Great, who incorporated swaths of present-day Ukraine into the Russian empire, on one of its central squares. Russian is still the dominant language, though Ukrainian is making inroads.

But the media law has provided an opening for Kremlin propagandists to portray Ukraine’s government as “ethno-fascists” who victimize Russian speakers. “It gave Putin a pretext to say he’s defending the rights of Russians,” Khersonsky said.

Others see things differently. Igor Yakobchuk, Odesa representative of Asnova Holding, a Ukrainian logistics company, said residents had become more loyal to Ukraine over the past eight years. “Before, people used to idealize the Russian world,” he said. “But after 2014, they came to their senses. They saw what happened in Donetsk and Luhansk, how bandits took power, and they were shocked. ”

Though people in the city think a full-scale Russian assault is unlikely, they fear the return of clashes and ethnic tensions. There is anxious talk of “provocations” by Russian operatives, street violence and terror attacks.

“Putin is former KGB – he thinks more in terms of ‘special operations’ than invasions,” said MP Goncharenko. “He could easily try to turn Odesa into a new Donbas.”