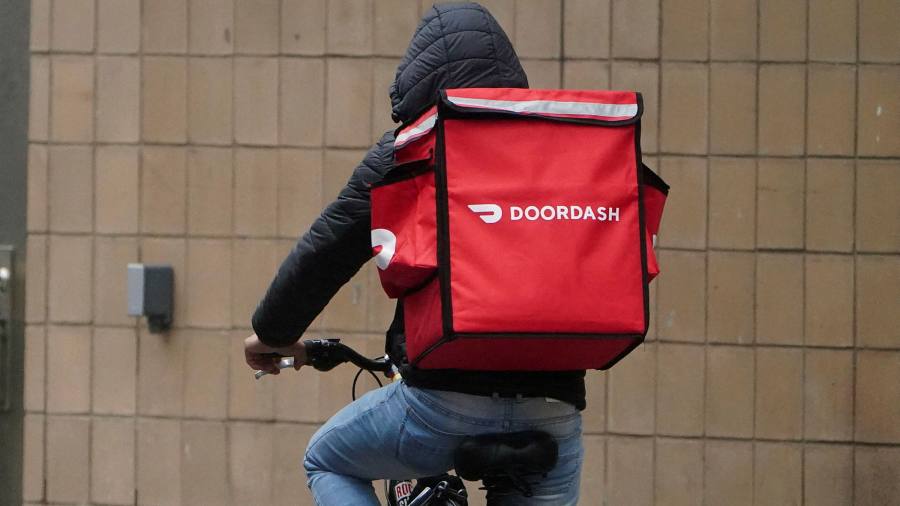 Shares of DoorDash leap 30 percent in after-hours trading on Wednesday after the food delivery company reported stronger than expected revenue in the final quarter of 2021 despite missing Wall Street’s profitability target.

Revenue improved 34 per cent year on year to $ 1.3bn, marginally better than the $ 1.28bn analysts had been looking for, suggesting that demand for food delivery remains high even as communities lift the vast majority of coronavirus restrictions.

Despite the double-digit increase, it was DoorDash’s third straight quarter of slower revenue growth, with tough comparisons to 2020 when lockdowns caused a blistering surge in online food orders.

By contrast, Uber Eats last week reported a 78 percent increase in revenue for the same October-December period, pushing its food division into its first-ever quarter of adjusted earnings before interest, taxes, depreciation and amortization profitability.

Even though the total value of its orders rose 36 per cent, DoorDash reported lower than expected adjusted ebitda and overall net income.

The adjusted metric, which strips out costs related to interest, taxes, depreciation and amortization, as well as some other non-operational expenses, came in at $ 47mn, down from $ 94mn in the same quarter a year earlier and short of the $ 73 mn expected by analysts, according to data from FactSet.

“Could we generate increasing profits? Absolutely, ”he told the Financial Times.

“Should we generate increasing profits? No, because then we’re not actually investing for the years to come. We are trying to prioritize growth for many years, but we want to do it in a way where these investments will ultimately translate into long-term profit dollars. ”

The company registered a net loss of $ 155mn, steeper than the $ 85mn expected by analysts, according to S&P Capital IQ.

DoorDash said it was investing heavily in growth as it competes with the likes of Gopuff in the rapid delivery sector. DoorDash now operates 74 warehouses in the US, known as DashMarts, up from 33 in April 2021, according to analysis by YipitData.

The analysis also suggested DoorDash had maintained its dominant position in restaurant delivery, accounting for 55 per cent of the US market, versus Uber’s 31 per cent.

Adarkar pointed to the growth of the DashPass subscription program, through which members pay $ 9.99 per month to avoid service fees along with lower delivery charges. In the fourth quarter it had 10mn members, representing about 40 per cent of all DoorDash’s active users.

DoorDash offered vague guidance for the current quarter, citing Covid-19 and labor market unpredictability. It said it anticipated adjusted ebitda of between $ 0 and $ 50mn. Analysts were expecting in the range of $ 107mn.