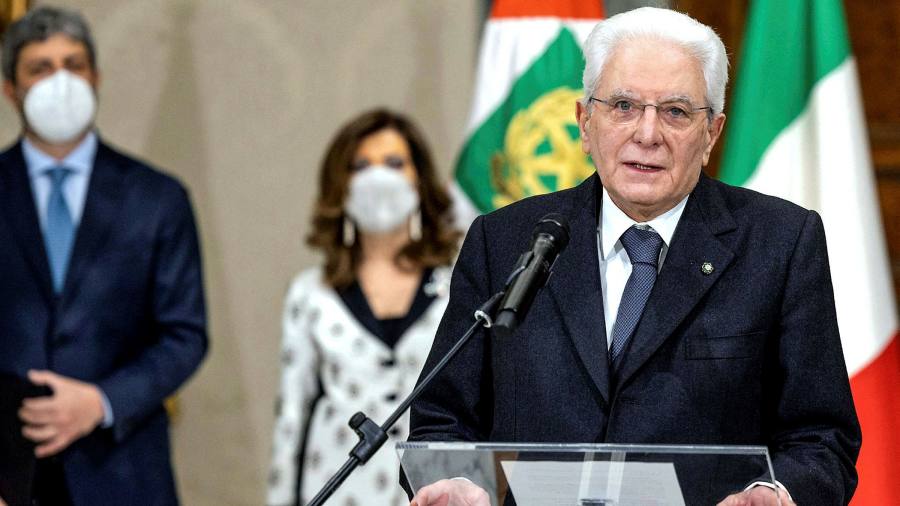 In the last weeks of his seven-year term as president, Sergio Mattarella made it clear that he did not think it appropriate to serve another term as Italy’s head of state. He did not want that either.

But as lawmakers’ attempts to agree on a successor became toxic – threatening the fragile national unity government of Prime Minister Mario Draghi – lawmakers forced the reluctant 80-year-old Mattarella to stay. He was driven to a landslide victory Saturday night – the eighth round of a presidential election process that began last Monday.

“The duty to the nation must prevail over my own personal choices,” the president said, visibly emotional, afterwards.

Italian social media is now buzzing with memes by the president, including one in which he is tied to his chair with a thick rope. But despite Mattarella’s personal ambivalence, his re-election has pleased Italians, especially business, as well as politicians and political decision-makers across Europe.

His extension now gives Rome the prospect of continuity and stability, leaving Draghi – who was considered one of Mattarella’s most credible potential successors – free to push ahead with the political revisions demanded by Italy’s 200 billion. EUR EU-funded reform and investment plan.

“Parliament has made the best possible decision – certainly the one most wanted by so many Italian citizens and businesses,” said Corrado Passera, CEO of Illimity Bank and a former infrastructure minister. “The current government will be able to implement all the reforms and measures that Italy has committed to.”

Mujtaba Rahman, CEO of Europe at Eurasia Group, the political risk advisory firm, said: “Compared to every conceivable alternative, it is the best result that Europe and the markets could have hoped for … it creates a window of six or seven months, where you can get a lot done. “

The result will also allow Draghi to participate in critical talks across Europe on EU reforms, including amendments to the Single Market Growth and Stability Pact, which set out fiscal rules for the euro area. Draghi, a former head of the European Central Bank, appointed by Mattarella last year amid a deep economic and health crisis, “will be a very influential voice at the table in that discussion,” Rahman said.

Italy’s presidential election came at a sensitive time when Rome was in the early stages of an ambitious reform plan to restart its chronically underperforming economy. Over the next six months, Italy will have to tackle controversial issues – including a revision of its public procurement and competition law – in order to receive the next tranche of EU funds.

Draghi’s potential rise to the presidency had raised concerns in Italy’s business, European capitals and financial markets, with widespread concern that a less formidable successor as prime minister would fight to push reforms through a fragile coalition government. Italian lawmakers themselves feared being driven into an early election if they could not agree on a replacement as prime minister.

But while Mattarella’s re-election has prevented the government’s immediate implosion, analysts warn that Draghi faces significant challenges in trying to implement the next round of reforms.

The presidential election revealed tensions in the national unity government between the right and left blocs, especially after league leader Matteo Salvini broke the rankings to call on right-wing parties to support his preferred candidate.

But it also revealed deep rifts within parties as leaders, including Salvini, struggled to keep their factions together.

“The road ahead will be uphill, not downhill,” said Daniele Albertazzi, a professor of politics at the UK’s University of Surrey. “I never believed that just because you are Draghi, you can do whatever you want. He is in the hands of political parties. They have political power and they are themselves divided – right to left, factions to factions. Everything this will create chaos. “

But others said the conflicts within political parties could strengthen Draghi’s hand and strengthen his ability to enforce compromise agreements.

His ultimate weapon, analysts say, would be a threat to step down and pull the plug on the national unity government, triggering early elections if the parties refuse to cooperate.

“There is an opportunity for Draghi to further expand his control over the government and the ruling coalition and speed up reforms,” ​​said Wolfango Piccoli, co-president of Teneo, the political risk consulting firm. “He can try to exploit the total disorder that seems to prevail in… Coalition.”

Former Italian Finance Minister Lorenzo Codogno, founder of London-based LC Macro Advisors, a consulting firm, said: “A week of intense fighting, and the end result, will undoubtedly produce a showdown within parties and coalitions over the coming days and weeks. ”

“The parties appear weaker and divided,. . . which could facilitate Draghi’s job of finding compromise solutions on reforms, ”Codogno added. “All in all, it was a narrow escape from a possible political disaster.”

“The outlook will be challenging from summer,” Rahman said. “As we get closer to the election, the coalition will become much more unmanageable and difficult to control… The window to get things done is very narrow.”

Further reporting by Silvia Sciorilli Borrelli in Milan and Davide Ghiglione in Rome.