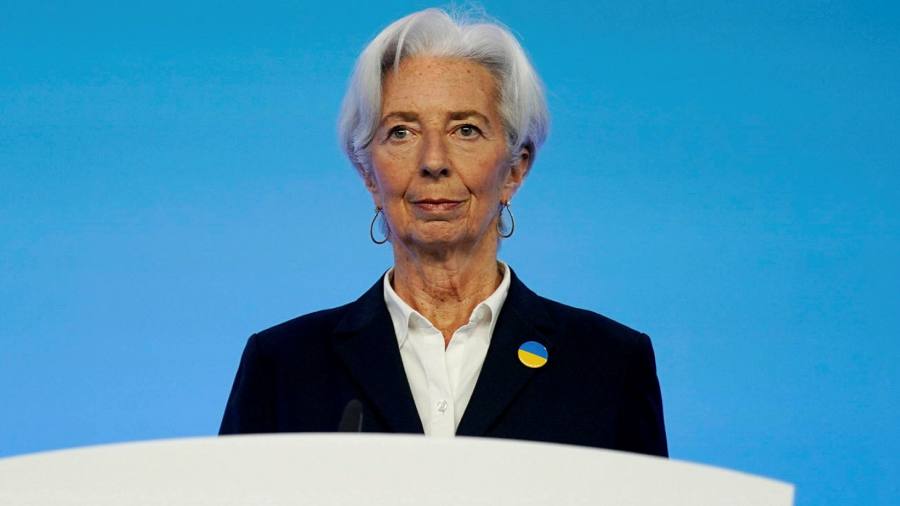 The European Central Bank has scaled back its bond-buying stimulus plan and said net purchases could stop in the third quarter if medium-term inflation expectations continue to be driven up by the war in Ukraine.

“The Russian invasion of Ukraine is a watershed for Europe,” the ECB said in a statement after the governing council’s meeting in Frankfurt on Thursday, adding that it would “take whatever action is needed.” . . to pursue price stability and to safeguard financial stability ”.

“If the incoming data support the expectation that the medium-term inflation outlook will not weaken even after the end of our net asset purchases, the governing council will conclude net purchases under the APP [asset purchase programme] in the third quarter, ”it said.

The bank added the € 1.85tn emergency bond-buying scheme it launched in response to the coronavirus pandemic would stop net purchases as planned at the end of March.

It kept its deposit rate at minus 0.5 per cent and said it was “ready to adjust all instruments” in its policy toolbox, including rates and asset purchases, to achieve its medium-term inflation target of 2 per cent.

Analysts interpreted the move to speed up the ECB’s exit from buying more bonds as a signal that it could raise interest rates in the fourth quarter – which would be the first such move for more than a decade.

“In light of the stagflation risk and high uncertainty, this decision gives the central bank maximum flexibility and keeps the option open for a rate hike before year-end,” said Carsten Brzeski, head of macro research at ING.

The central bank removed a reference to a potential rate cut from its guidance, making it clearer that the next move on rates will be upwards. But it also dropped a commitment to end net asset purchases “shortly before” it raises interest rates, giving it more leeway to stop buying bonds without it meaning a rate rise is imminent.

The ECB also announced that “in view of the highly uncertain environment caused by the Russian invasion of Ukraine and the risk of regional spillovers”, it would extend the Eurosystem repo facility for central banks until January 15 2023. The facility allows it to provide euro liquidity to central banks outside the single currency zone.

Christine Lagarde, ECB president, said the war in Ukraine would have a “material impact on economic activity” as a result of higher energy prices, disruption to commerce and weaker confidence. She added that the ECB had considered a range of scenarios in light of the “highly uncertain environment” and that all policymakers had “rallied” behind the plan it announced on Thursday.

The central bank adjusted its growth and inflation forecasts over the next three years. It slashed its growth forecast for this year to 3.7 per cent, down from 4.2 per cent. Inflation would reach a record high of 5.1 per cent this year, up from its previous forecast of 3.2 per cent. Crucially it forecast inflation would fade to 2.1 per cent next year and 1.9 per cent in 2024 – meaning it still has not fulfilled a key condition to raise interest rates.

Lagarde said: “Inflation could be considerably higher in the near term. However, in all scenarios, inflation is expected to stabilize around our target by 2024. ”

On rates, Lagarde said the ECB would be “data-dependent” in deciding how soon to raise rates, adding it could happen a week or several months after it stops net bond purchases, depending on the inflation outlook.

Only last month, the ECB governing council agreed it could speed up a “gradual normalization” of its ultra-loose monetary policy, setting the stage for it to end all net bond purchases by the autumn and to raise interest rates by the end of the year.

But the invasion of Ukraine and the sanctions imposed on Russia by the west have prompted economists to slash their eurozone growth forecasts for this year and to predict that inflation will surge from the record level of 5.8 per cent reached in February.

This leaves the ECB in a difficult position, torn between the desire to tackle inflation that is expected to stay well above its 2 per cent target until at least next year and wanting to support the economy, which economists fear could suffer its third recession in two years.

The ECB is working with the European Commission to “provide tools and the means to provide support” for Ukraine and its population, including the more than 2.1mn people who have fled the country, Lagarde said. But she added that the rules on the swap and repurchase lines the ECB provided to other central banks could prevent it from agreeing one with Ukraine’s central bank.

The euro, which had fallen ahead of the ECB announcement, rebounded, trading 0.3 per cent higher at $ 1,111 against the US dollar.

Investors responded to the prospect of an earlier end to ECB asset purchases by selling eurozone bonds, pushing Germany’s 10-year yield to 0.27 per cent, the highest in more than three weeks. Riskier eurozone debt was hit harder, with Italian 10-year yields climbing 0.2 percentage points to 1.88 per cent.

“A faster winding down of the asset purchase program will perhaps come as a surprise to market participants who expected an ECB capitulation in the face of weaker growth forecasts,” said Seema Shah, chief strategist at Principal Global Investors.