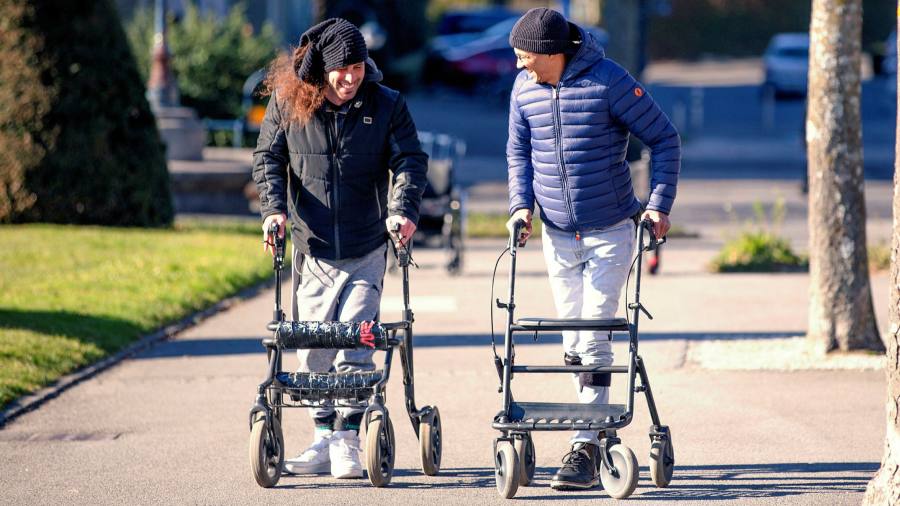 Electronic implants have for the first time enabled people totally paralyzed by spinal cord injury to stand, walk and even swim and cycle.

Swiss researchers at École Polytechnique Fédérale de Lausanne and Lausanne University Hospital announced in 2018 that their devices had restored movement to the legs of paraplegic patients with partial spinal injuries.

Now they have improved the technology with new implants and artificial intelligence software to restore trunk and leg function to three patients whose lower limbs had been completely immobile. The study is published in the journal Nature Medicine.

“All three patients were able to stand, walk, pedal, swim and control their torso movements in just one day, after their implants were activated,” said Grégoire Courtine, EPFL professor and co-leader of the project. “That’s thanks to the specific stimulation programs we wrote for each type of activity.”

Patients specify their desired activity on a small tablet computer, which relays the appropriate instructions wirelessly to a pacemaker in their abdomen and then on to a series of electrodes implanted in the lower spinal cord, below the injury site. These stimulate nerve cells to initiate movement in the muscles.

One of the patients, Michel Roccati who was paralyzed in a motorbike accident four years ago, described his experience of the implant ahead of the study’s publication. “The first few steps were incredible – a dream come true,” Roccati said.

Intensive training over several months strengthened muscles wasted by years of inactivity, while getting the brain reaccustomed to standing and moving around. “I’ve set myself a series of goals,” said Roccati. “For instance, I can now go up and down stairs, and I hope to be able to walk one kilometer [with a walker] by this spring. ”

The successes reported in 2018 were achieved with repurposed electrodes originally designed for pain treatment. The latest research used electrodes threaded along the spinal cord directly beneath the vertebrae, which the team developed for the purpose in collaboration with Onward, a medical technology company based in the Netherlands and Switzerland.

“Our breakthrough is the longer, wider implanted leads with electrodes arranged in a way that corresponds exactly to the spinal nerve roots,” said Jocelyne Bloch, the neurosurgeon who fitted them. “That gives us precise control over the neurons regulating specific muscles.”

Bloch and Courtine are working with Onward on a series of further improvements to the technology, miniaturizing some of the components and making the system easier for paralyzed patients to use. But Courtois said it would be “several years” before the technology moved beyond clinical trials to become a routine treatment for paraplegia.

All six volunteers who have taken part in the two studies were paralyzed years earlier. The researchers also want to experiment with people whose spinal injuries occurred more recently, who may respond even better to electronic stimulus because their nerves and muscles would be less atrophied.

Meanwhile David M’zee, one of the participants in the previous trial, who helped to publish the original implant advance in 2018, has revealed that his health has improved to such an extent that he now goes kitesurfing on Swiss lakes – and he has fathered a child.