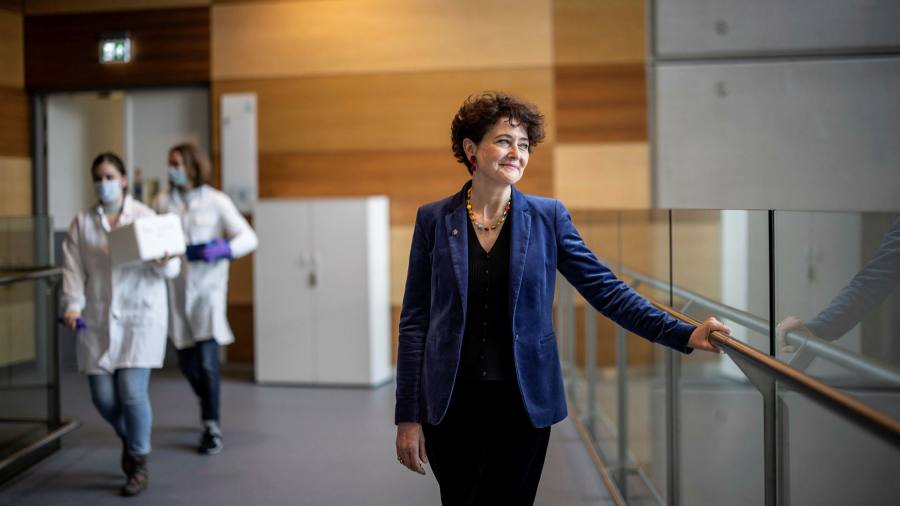 Edith Heard is the epitome of a European scientist, both in her personal background and in her current job running a quintessential international research organization.

She grew up in a Greek-speaking home in London, started her career in the UK and became a leading genetics researcher in Paris, before moving to Germany three years ago to lead the European Molecular Biology Laboratory.

EMBL, as it is known, is Europe’s flagship life sciences lab, operating on six sites, including headquarters in Heidelberg and the European Bioinformatics Institute near Cambridge. It is an international organization outside the EU, like the physics center Cern and the European Space Agency.

Heard’s European identity is a key reason why she was keen to become director-general of EMBL. “After the referendum I felt so gutted that Brexit might damage science,” she says. “The UK is part of Europe and I feel passionately about making sure that European science works. So I thought, rather than complaining, why do not you do something about it? ”

Since taking charge in January 2019, Heard, 56, has strengthened EMBL in two ways: putting its finances on a more secure foundation, and formulating a new, more outward-looking strategic plan for the next five years.

“EMBL is fragile because we’ve been underfunded for 10 years,” she says. “Inflation was not included in our budgetary calculations and we were only receiving tiny percentage increases, while costs were going up more quickly. When I arrived, we were really in a critical state, relying very much on external funding. ”

In 2020 EMBL spent € 278mn, of which about half was contributed by the laboratory’s 27 member states and half came from outside sources including research grants from national and charitable agencies. “I really want us to get away from too much reliance on external funding,” says Heard, noting that in some areas its extent was becoming untenable as it accounted for up to 60 percent of resources. “We need more sustainability.”

Heard originally asked member states to double EMBL’s core funding over five years. In the event she got a commitment of 10 per cent annual increases which will amount to 60 per cent more by 2026. “That will put us in a safer place but we’re not there yet because they still have not accepted that inflation should be included, ”she says.

The extra funding will enable EMBL to implement a new strategic plan called Molecules to Ecosystems, which runs from now to 2026. It will involve molecular biologists leaving their labs, where they tend to work with model organisms such as mice or arabidopsis plants in precisely controlled settings, into the real world to study life in its far messier natural context. Heard talks enthusiastically about the scientific dividends of the “life in context” program – and the goodwill that EMBL could gain by extending research beyond its established sites in Germany, France, the UK, Italy and Spain.

For example, mobile labs will visit Europe’s coastlines, taking samples from sea, land and the area between them, to analyze life on the shoreline in unprecedented detail. This project aims to provide new insights into the effects of pollution, including the build-up of antimicrobial resistance in the environment resulting from overuse of antibiotics in medicine and agriculture.

I tend to be very horizontal in my approach [to leadership]. I do not think of my lab members as working for me; I’m working with them. I can not do it any other way.

On top of running a complex international academic organization with 1,900 employees, Heard maintains her own research on a subject that she has been investigating for 30 years: “X-inactivation”. Women and other female mammals have two X-chromosomes, while males only have one. If both X-chromosomes were working at full throttle, the double dose of their protein products would be lethal, she explains. To prevent this, one X-chromosome in every cell is largely shut down, leaving just a few of its genes in action.

Heard is talking to the Financial Times at the Francis Crick Institute, London’s life sciences powerhouse, where she is attending an advisory board meeting. But she is buzzing with news from her own research team in Heidelberg. “I spent three hours with my lab yesterday and they had just stumbled upon some amazing results that are finally giving us the key to how some genes on the X-chromosome escape from X-inactivation,” she says.

Such moments compensate for what Heard calls “a nightmarish last two years when I was not only running a huge organization trying to get its funding but on top of that we were working in a pandemic, so we could not meet physically. . . But it gives me an absolute buzz finally to get answers to questions that I’ve been asking for decades. ”

If I had to select one person, I would probably choose the Pope. He is perhaps the most inspiring thought leader I can think of today. I am not religious at all but I think Pope Francis is remarkable. There were times over the past few years where he seemed to be one of the very few people to come up with sensible, visionary and humane suggestions, through his expressions of concern about the poor, about the pandemic, about climate change, our planet. . .

Right now though, my leadership “heroes” are not single people, but collective actions or movements that take us to places humanity needs to go – despite the challenges. An example could be the World Food Program, which was awarded the Nobel Prize for Peace for “saving lives in emergencies and using food assistance to build a pathway to peace, stability and prosperity”.

The importance of empathy, of trying to listen and tune into people to bring them on board. I think I learned this from an early age, when I was rather lost in translation, as an only-child in a multilingual and multicultural environment. This comes in very handy when leading a research group, or a department or an organization like EMBL.

What would you be doing if you were not a scientific leader?

Just being a scientist is probably what I would feel most comfortable with. I still run a lab (and that is a really important reality check in my leadership role).

If I had to be something other than a scientist, I would definitely try to do something “to help the world”.

Heard built up expertise in leadership on a smaller scale while working at the Institut Curie in Paris, first running a research group on the X-chromosome and then as director of its Genetics and Developmental Biology Unit.

“I applied the same leadership principles to every part of my life,” she says. “I tend to be very horizontal in my approach. I do not think of my lab members as working for me; I’m working with them. I can not do it any other way. ”

For 10 years Heard has also been a professor at the Collège de France, the country’s most prestigious academic institution. “I give public lectures in my field of epigenetics every year – which has been an absolute driver in my thinking,” she says. “I have to dive into a new topic and then communicate it to the general public as well as scientists. Without that, I do not think I’d have dared to become DG of EMBL. ”

The position of women in science and medicine is an important issue for Heard, both through her own research into genetic differences between the sexes and as a leading female scientist.

“If you’re thinking about personalized medicine, women are treated as mini-men by doctors, and medications that are given to women have been clinically tested mainly on men,” she says. “Working on the X-chromosome and realizing the degree of variation that there is within an individual when you’s female, really means that we can not just treat a female patient as we treat a male patient. Of course, part of it is hormonal, but even if you took that away there’s a lot of difference because of the sex chromosomes. ”

On the professional side, “more women than men go into life sciences and yet there’s still only a few per cent who end up in leadership positions,” she adds. “At EMBL we have developed a strategy to deal with it. It’s not just dealing with the ‘leaky pipeline’ and preventing the losses. We want to make sure that we are aware of the issue at every level when we hire people. ”

The downside of Brexit remains a preoccupation for Heard. “Scientists are hesitant about moving to the UK and about moving away from the UK, whereas it used to be a totally fluid two-way thing,” she says. “It’s really sad that there is a generation of scientists who are not necessarily going to make a decision because of the uncertainty around Brexit. But at EMBL we are trying really hard to make European science work. ”

Is fertility a topic for the workplace?