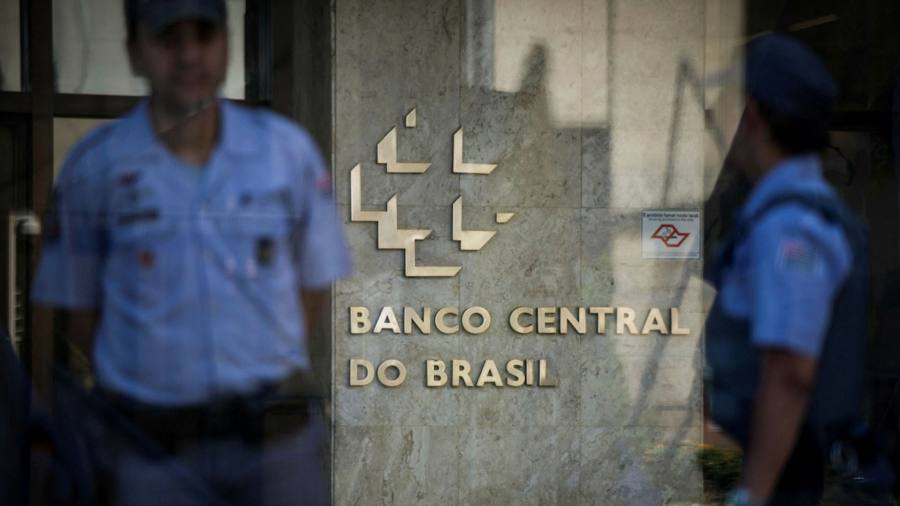 As the Federal Reserve prepares to start raising interest rates as soon as next month, leading emerging economies such as Brazil and Russia are so far ahead of the US central bank they could be nearing the end of the rate-raising cycles they embarked on last year .

It is an unusual situation for emerging market central banks, which typically follow the Fed’s lead. But the danger posed by sharp increases in consumer price inflation prompted some policymakers to act early and aggressively – so much so, analysts warn, that high interest rates at a time of slow growth and high debt levels are jeopardizing their recovery from the coronavirus crisis.

But he warned some monetary policymakers might have overreacted to temporary factors such as supply chain disruption and rising food prices, slamming the brakes on growth while economies were still in need of stimulus.

In Brazil, Wolfe noted, short-term market lending rates rose above long-term rates at the end of last year, often a sign of a coming recession. “It’s easy to make the case that that’s the direction Brazil is headed.”

Brazil’s central bank began tightening in March last year when its rate was 2 per cent. Last week, after eight steps up, it reached 10.75 per cent. A survey of local economists has predicted rates will peak at 12 per cent in May before paring back to 11.75 per cent in December. The same survey showed economic growth slowing to just 0.3 per cent this year, from an estimated 4.7 per cent in 2021.

Brazil is far from alone. The Czech Republic increased its rate to 4.5 per cent last week – a steep rise from 0.25 per cent when tightening began last June. The central bank said the rate would peak at about 5 per cent this spring.

Russia has doubled its policy rate to 8.5 per cent over the past year and expects to complete its cycle in the coming months. Chile’s rate went from 0.5 per cent in July to 5.5 per cent last month and is expected to peak at 7.5 per cent by mid-year.

Not counting Zimbabwe, which raised its policy rate 25 percentage points to 60 per cent in 2021, 33 developing countries have raised rates since the start of last year by a combined total of 84.55 percentage points, according to the Central Bank News website. Among wealthy countries, only Iceland, New Zealand, Norway and the UK have raised rates in the same period, by a combined 2.65 points.

EM central banks have got ahead of the Fed before, and it has tended to end badly. They were raising rates as the 2008-09 financial crisis neared, and before the 2011 eurozone currency crisis and the 2013 “taper tantrum” – the unexpected tightening of Fed policy that led to a heavy sell-off across EM stock and bond markets.

This time round, the Fed has signaled well in advance its intention to tighten policy not only by raising rates but by ending and then reversing its bond-buying program. Better communication, analysts say, makes a repeat of the taper tantrum unlikely.

But EM policymakers have much more to worry about. The pandemic is far from over. In many countries, debts have risen beyond sustainable levels, threatening a wave of defaults. The difference between the rate of growth in emerging and developed economies – the justification for investing in EM assets – has fallen to its lowest level this century. High and rising interest rates will put an additional brake on growth.

Nevertheless, policymakers may have done well to take their medicine today rather than postponing it for tomorrow. “If you let inflation get out of control, the consequences [for economic growth] will be far worse, ”said Peter West, economic adviser to EM Funding, a boutique advisory company in London.

This is especially true in Latin America and beyond, where memories of high and even hyperinflation mean rising prices can quickly feed into an escalation of inflation expectations, setting off a spiral of wage and price increases. The danger is acute in places such as Argentina and Chile, which still use index mechanisms to link financial contracts and wages to inflation.

Not all emerging economies have needed to control inflation. In many countries in Asia – in part because the price of rice, the staple food, has advanced much less than the price of wheat, the staple elsewhere – inflation is low and central banks have held firm. Indonesia cut its policy rate 0.25 points to 3.5 per cent a year ago. Malaysia cut the same amount to 1.75 per cent in July 2020, as did the Philippines to 2 per cent in November that year.

For those that have raised rates aggressively, there may even be some short-term pay-offs. Foreign investors fled EM stocks and bonds last year as the risks of high inflation and stagnating growth outweighed the gains from higher interest rates. This year, as Brazil nears the end of its tightening cycle, its stock market has been among the world’s best performers as investors return.

The threat for these countries is that investors may soon turn their attention back to weaknesses in the real economy.

“I do not see many undertaking the type of structural reforms that would unlock the potential for faster growth,” said Wolfe, the EM economist. “The outlook is really unclear.”