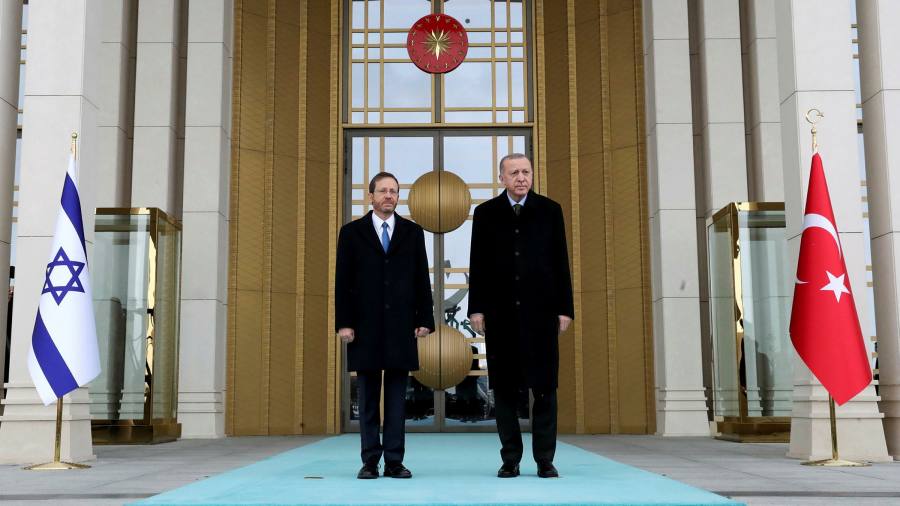 Turkey and Israel have reached a “turning point” in their relationship and will pursue greater trade and energy co-operation in the interest of regional peace, President Recep Tayyip Erdogan said after the first visit by an Israeli head of state in more than a decade .

The Mediterranean neighbors can “work together to help stability in the region,” Israeli President Isaac Herzog said in joint remarks the leaders delivered after talks in Ankara.

Ties between the once-close allies have been volatile for years, largely because of Erdogan’s criticism of Israel’s treatment of Palestinians. The thaw with Israel is part of a broader effort by the Erdogan to repair Turkey’s relations across the region after alienating Israel, Arab states, Greece and others. Easing Turkey’s diplomatic isolation could boost its crisis-hit economy as Erdogan faces re-election next year.

Russia’s war against Ukraine is also forcing countries to recalibrate their foreign policies. Both countries have offered to mediate in the conflict with Israeli prime minister Naftali Bennett meeting Russian president Vladimir Putin in Moscow last weekend and Turkey hosting the Russian and Ukrainian foreign ministers on Thursday.

“Especially in days like these, we want to project to the world that we’re heading in a different direction,” said Herzog.

Turkey has also been at loggerheads with Israel, Greece, Cyprus and Egypt, over the rights to potential natural gas stores in the Mediterranean Sea and a pipeline project that would bypass Turkey. That dispute, as well as costs and environmental concerns, has cast doubts about the pipeline’s viability. The risk of disruptions in Russian gas supplies to Europe may now give it renewed impetus, analysts said.

“Developments in our region in recent days have once again proven the importance of energy security,” Erdogan said, adding that Turkey and Israel could collaborate on gas exploration and drilling in the Mediterranean Sea. “This is an opportunity for us to revive our previous co-operation in energy.”

Erdogan late last year mended fences with the United Arab Emirates, winning a pledge of $ 10bn in investment, and has expressed a desire to bridge rifts with Egypt and Saudi Arabia. Turkey and Israel seek a 17 percent increase in bilateral trade to $ 10bn this year, Erdogan said.

Erdogan said he “openly shared” with Herzog his views on the Palestinian issue. For its part, Israel has slammed Erdogan’s embrace of Hamas, the militant group that controls Gaza that Israel considers a terrorist group.

“Turkey’s economic entropy means it no longer has the luxury of its entrenched stances,” said Salih Bicakci, a professor of international relations at Istanbul’s Kadir Has University.

While Herzog’s visit shows the countries are ready to turn the page, it was too early to talk about a “complete turnround,” especially when most Turks feel sympathy for the Palestinian cause, Bicakci said.

Relations between the two first ruptured after Israeli soldiers stormed civilian ships trying to break a blockade of the Gaza Strip in 2010, killing 10 Turkish activists. The countries last withdrew their respective ambassadors in 2018 when Turkey cut ties in protest at the US decision to move its embassy to Jerusalem and the subsequent deadly crackdown on Palestinian protests.