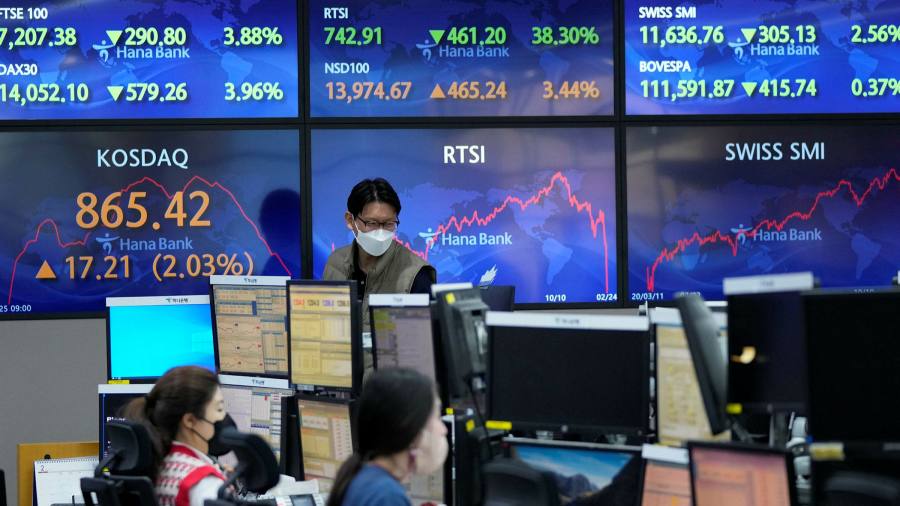 European stock futures tumbled and oil prices rose after Russian president Vladimir Putin put his country’s nuclear forces on high alert and the west levied its toughest sanctions yet on Moscow following the invasion of Ukraine.

In Asia-Pacific trading on Monday, futures tipped the Euro Stoxx 50 to drop 3.3 per cent, while the S&P 500 was expected to shed 1.2 per cent after closing up 2.2 per cent on Friday in a relief rally.

In Asian equity markets, Hong Kong’s Hang Seng index fell as much as 1.6 per cent to its lowest level in almost a year, while China’s CSI 300 index of Shanghai- and Shenzhen-listed stocks fell 0.3 per cent.

The Russian ruble tumbled more than 28 per cent to a record low of almost 118 against the dollar in early trading.

Russia’s central bank banned foreign selling of Russian securities on Monday in a bid to stem the market fallout. It also said currency and money markets would open at 10am but that it would announce at 1pm whether stock and other markets would open today.

Putin’s decision to put nuclear forces on high alert was announced after the US and western allies imposed sanctions on Russia’s central bank and ejected some of the country’s lenders from the Swift messaging system that enables financial institutions to make global payments.

Concerns over the regional fallout from the war also pushed traders to dump European currencies for the safety of the dollar. The euro fell 1 per cent to $ 1,116 while sterling shed 0.3 per cent to $ 1,337.

Brent climbed above $ 100 last week for the first time since 2014 and prices have remained volatile despite hopes that ringfencing the Russian energy sector with western sanctions would help avoid throttling global supplies.

Meanwhile, the potential disruption to grain shipments out of Ukraine and Russia, which together account for roughly 30 per cent of global wheat exports, pushed futures prices higher.

Wheat futures trading in Chicago rose as much as 9.2 per cent to $ 9.20 a bushel, near Friday’s 13-year high. Soyabean futures rose almost 3 per cent and corn was up almost 4 cents.

“Though we expect oil and food prices to moderate, the combination of higher commodity prices and financial market stress is a threat to growth,” said Nathan Sheets, global chief economist at Citi. “The same uncertainties that are roiling financial markets are likely to constrain aggregate demand directly.”

Russian rouble plunges 28% after US and allies impose tighter sanctions