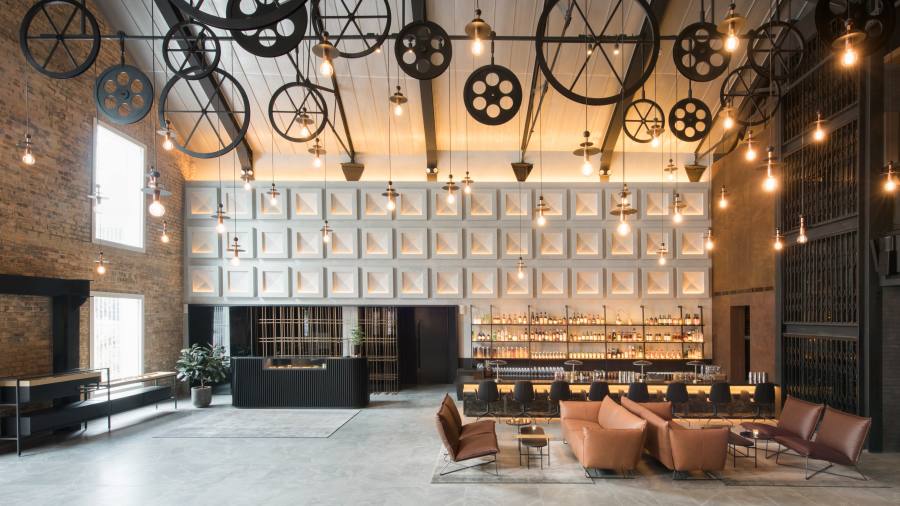 How To Ace It In Kyoto

There’s as much Williamsburg Loft as there is Machiya guest house here, but given how difficult it can be to experience Japan in style without dropping a mint, we’d make the case for the Ace Hotel in Kyoto, which opened in 2020. The architectural credentials will thrill the enthusiast: a 1920s building by revered modernist Tetsuro Yoshida, renovated and extended by Kengo Kuma in collaboration with LA-based interiors darlings Commune Design.

There are color, industrial-chic statements, and fine craftsmanship everywhere you look, from the ceramics (of course) to the detailed bamboo surfaces. The rooms go full hipster, with turntables, slick midcentury-inspired furniture and traditional sliding doors updated with graphic patterns. And should you want a reprieve from the izakaya and omakase gauntlet of a typical Japan itinerary, there are even tacos, courtesy of chef Wes Avila, founder of LA’s famous Guerrilla. From about £ 180, acehotel.com

More than in most Asian cities, Singapore’s hotels skew hard to the two poles – sleek, gorgeous and expensive, or cheery and affordable but not long on style. When it opened in 2017 on the Singapore River, the 37-room Warehouse hit the sweet spot where sexy looks and sexy rates intersect. Its owners, who run some of the city’s most newsworthy bars and restaurants, chose to privilege local artisan traditions (unusual here) and enlisted local design firm Asylum to project them through a subtly contemporary lens. These manifest in handwoven color and texture on bed throws and linens, selective use of natural fibers, and a careful, very spare rehabilitation of the listed 19th-century godown in which the hotel is housed.

Entry-level rooms are decidedly cozy of dimension, but you’ll probably be in the ground-floor bar a lot of the time anyway; it became a favored watering hole from more or less the day the place opened, and is still pole position for a night out on Robertson Quay, whose bars and restaurants line the other side of the river. From about £ 150, thewarehousehotel.com

Small is beautiful in Mexico City

It has just three rooms; it’s in Roma Norte, one of Mexico City’s buzziest crossroads of culture, eating and drinking and one-off boutiques; and while there’s no pool or enfilade of common areas, it packs a surfeit of original style into its compact French-terrace house space. La Valise is part of a two-strong micro-hotel chain (the other one is in Tulum; a third, San Miguel de Allende address is opening this year).

There’s a quirky chic to the design, with its elements of flea-market finds, rough concrete finishes, free-standing baths, original plank floors here and there, and profusions of traditional carved, painted sideboards and wardrobes. No restaurant, but a nice coffee shop just downstairs, and a simple breakfast is delivered each morning to your room. From about £ 171, lavalisecdmx.com

The Hotel Flora is no one’s idea of ​​a secret: Diana and Alessandro Romanelli opened their sweet Venetian mainstay in 1964, and their grandson Gioele and his wife Heiby still run the show today. But it has benefited in subtle ways from how the Flora enterprise has expanded its remit: besides the Romanellis’ second hotel, the Novecento, and Casa Flora, their 2017 guest residence that showcases local craftsmanship (and has to be one of the city’s most delicious homestay experiences), they more recently launched Inside Venice, a hyper-local experience-designing service that puts travelers in touch with makers, designers, glassblowers, fishmongers, restaurateurs – basically, if it’s Venetian and sui generis, they’ll hook you up. The beauty of the Flora today – besides the prices – is that you benefit from all that expertise, in surrounds that are lovingly looked after and regularly refurbished. The little wabi-sabi courtyard garden is (still) a bit of understated heaven, and warrants an aperitif wherever you might be staying. From € 175, hotelflora.it

And for those whose idea of ​​a perfect Parisian weekend is scouring the pucks for fine vintage furniture and design, there’s a new and promising address. MOB House is the Saint Ouen-neighborhood brainchild of Michel Reybier (he of La Réserve and Cos d’Estournel, in Bordeaux) and Cyril Aouizerate and Philippe Starck, who together created Mama Shelter, the, um, mother of all high-style / low-cost hotel brands.

The MOB template ticks many good boxes: rooms that combine office, meeting space and bedroom in one; design that showcases raw wood and stone, clay and terracotta, and natural cottons and linens; 2,000sq m of outdoor and garden spaces; a 20m pool and full gym; a brasserie, Feuille de Chou, that sources everything from within a radius of 20 miles. Plus open-plan communal work zones, private bikes and private balconies, and even a little stationery store for when inspiration strikes. From € 200, mobhouse.com