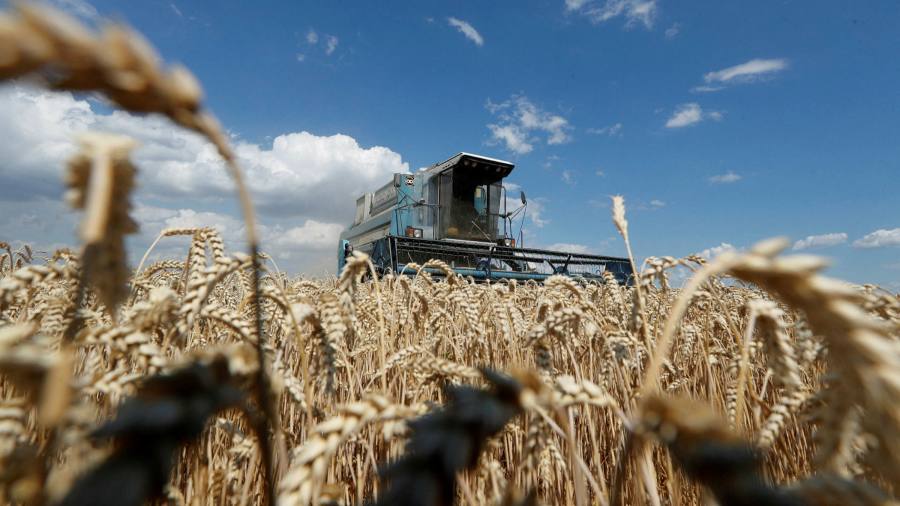 At this time of year, Kees Huizunga is normally busy planting wheat, barley and corn on his farm in central Ukraine. But, having lost workers to the frontline, the Dutch national left his grain silos to sound the alarm about the impact of the Russian invasion on global wheat supply.

Russia and Ukraine supply almost a third of the world’s wheat exports and since the Russian assault on its neighbor, ports on the Black Sea have come to a virtual standstill. As a result, wheat prices have soared to record highs, overtaking levels seen during the food crisis of 2007-08.

“If farmers in Ukraine do not start planting any time soon there will be huge crisis to food security. If Ukraine’s food production falls in the coming season the wheat price could double or triple, ”said the Dutch national, who has been farming for two decades in Cherkasy, 200km south of Kyiv. He is part of a farming union, whose 1,100 members cover just under 10 per cent of the country’s farmland.

While well stored wheat, such as that on Huizinga’s farm, can last several months, agricultural experts and policymakers have warned of the impact of delayed shipments on countries reliant on the region for wheat, grain, sunflower oil and barley.

“They’re going to have to find different suppliers and all that means higher prices,” said Joseph Glauber, the former chief economist at the US Department of Agriculture and a senior fellow at agricultural policy think-tank IFPRI.

The surge in prices will fuel soaring food inflation – already at a seven-year high of 7.8 per cent in January – and the biggest impact will be on the food security of poorer grain importers, warned analysts and food aid organizations.

Ukraine accounts for 90 per cent of Lebanon’s wheat imports and is a leading supplier for countries including Somalia, Syria and Libya. Lebanon is “really struggling with an already high import bill and this is only going to make things worse,” said James Swanston, emerging market economist at Capital Economics.

Russia also provides its Black Sea neighbor Turkey with more than 70 per cent of its wheat imports, according to the International Trade Center. Even before the Russian invasion of Ukraine, inflation in Turkey had hit a 20-year high of 54.4 per cent in February. “The war is only going to exacerbate the cost of food,” said Ismail Kemaloglu, the former head of the state Turkish Grain Board and now the director of the consultancy IK Tarimussu.

“What’s critical here is that the Black Sea offers a logistical and price advantage. . . Costs will rise significantly when [Turkey] buys from the US or Australia, ”he said. “Even if the war ends tomorrow, Ukraine’s planting season has already been disrupted and it will impact the 2022 harvest regardless.”

The WFP, which procures grains and food to distribute to poorer countries, bought just under 1.4m tonnes of wheat last year of which 70 per cent came from Ukraine and Russia.

Prior to the invasion it was already facing a 30 per cent increase in the cost of wheat, because of poor harvests in Canada, the US and Argentina. The latest surge in grain prices would further curtail its ability to provide aid, it said.
“This is an unnecessary shock of mega proportions,” said Arif Husain, chief economist at the UN World Food Program.

The last time wheat prices spiked to these levels in 2007 and 2008 because of severe production declines in leading producing countries such as Australia and Russia, protests spread through nearly 40 countries from Haiti to the Ivory Coast, while a jump in grain prices in 2009- 10 is regarded as one of the triggers of the Arab Spring uprisings in the Middle East.

Russia accounts for two-thirds of Egypt’s wheat exports. Egyptian authorities say their wheat inventories will last until mid June and the Egyptian local harvest should start coming in by mid April. Any rise in subsidized bread prices and further increase in food inflation in Egypt “increases the threat of social unrest,” said Swanston.

It is also unclear how long the crisis will last, analysts said, a fact that is boosting prices. “The market is worried that this is not a problem that’s going to be solved any time soon,” said Tim Worledge at Agricensus, the agricultural data and pricing agency.

Wheat inventories are tight everywhere and as Chinese and South Korean buyers of Ukrainian corn, used to feed livestock, sought sellers elsewhere, EU agricultural ministers on Wednesday discussed allowing farmers to boost production using the 10 per cent of land they usually leave fallow in response to the war in Ukraine.

In the short term, Ukrainian farmers contending with a war may struggle to spread fertilizers and pesticides and plant seeds for the spring crop. The next crop is due in the European summer. That harvest will depend on how long the Russian invasion lasts and for how long exports via the ports will be blocked.

Sitting in his friend’s house in Siret close to the Romania-Ukraine border, Huizinga said the main question raised during a call with 75 fellow Ukrainian farmers was whether to plant or not to plant. They may struggle to get fertilizer and crop protection and it is unclear whether they could actually harvest and ship the crop. “The supply chain is broken,” he said.

Some of the 400 staff on his 15,000 hectare farm have gone to fight and Huizinga has posted videos on social media of fellow farmers in the bomb shelters and villagers slaughtering pigs to deliver food to those in Kyiv and in the army. The difficulty, he said, could soon extend way beyond Ukraine. “We can face a huge problem, especially the poor people, who will have difficulty getting bread.”